Gilbert Keith Chesterton (born May 29, 1874 in the London borough of Kensington , † June 14, 1936 in Beaconsfield ) was an English writer and journalist . He is best known today for a series of detective novels about the character of Father Brown . 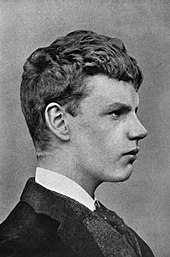 Chesterton was born in Campden Hill in the London borough of Kensington in 1874, the son of a London real estate agent. The family was Protestant and belonged to the Unitarian community .

He was educated at St Paul's School . He then attended the Slade School of Art to become an illustrator . He also attended literary studies at University College London but did not graduate. From 1896–1902 Chesterton worked for the London publisher Redway, and T. Fisher Unwin . During this time his first journalistic work fell as a freelance art and literary critic. In 1901 he married Frances Blogg. In 1902, Chesterton received a weekly column in the Daily News , followed by another weekly column in The Illustrated London News in 1905 , for which he wrote for the next 30 years.

By his own account he was fascinated by the occult , and he experimented with his brother Cecil with Ouija . He later turned back to Christianity , which led to his entry into the Roman Catholic Church in 1922 .

He usually wore a cape and a crushed hat, a cane and had a cigar hanging from his mouth. He often forgot where he was going and missed the train that was supposed to take him there. It is reported that he repeatedly sent telegrams to his wife from distant places such as “Am at Market Harborough. Where ought I to be? ”(“ Am in Market Harborough. Where should I be? ”), To which she replied,“ Home ”.

Chesterton was from 1930 to 1936 president of the Detection Club , an association of crime writers who created rules for a "fair crime novel".

Chesterton died at the age of 62 on June 14, 1936 at his home in Beaconsfield, Buckinghamshire. The homily at Chesterton's funeral mass at Westminster Cathedral was given by Ronald Knox . He was buried in Beaconsfield in the Catholic Cemetery. Chesterton's estate was valued at £ 28,389, which is the equivalent of about $ 2.6 million today.

Telegram from Pope Pius XI. to the death of Chesterton

In August 2013, his process of beatification began at the diocesan level in his home diocese of Northampton . However, Bishop Peter Doyle announced in August 2019 that the beatification process would not be pursued because of Chesterton's lack of personal spirituality.

In his novels, essays and short stories, Chesterton dealt intensively with modern philosophies and schools of thought. His often daring leaps of thought and his bringing together seemingly incompatible ideas, often with surprising results, are known. His way of reasoning has been boldly referred to as a "spiritual hussar ride".

Chesterton has had public debates with GB Shaw , HG Wells , Bertrand Russell and Clarence Darrow, among others . His perhaps most important discussion partner was Shaw, with whom he formed a warm friendship while at the same time rejecting his views. After his autobiography, he and Shaw played Cowboys in a silent film that was never released. He fought against various ideas and theories that were often and gladly represented at the beginning of the 20th century , above all he spoke out against euthanasia and racial studies as well as against any idea of eugenics . He took a critical look at Nietzsche's thoughts on the superman . He opposed British colonialism and supported Irish independence. 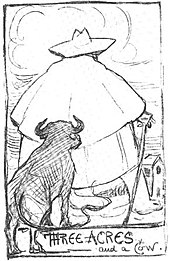 "Three acres of land and a cow" (drawing by Chesterton)

Chesterton admired the Middle Ages , which in his opinion were often portrayed unfairly negatively in modern times . He advocated that democracy should listen to the voice of the poor and slum dwellers on the basis of its very nature instead of deciding on them from above “ for their own good” (“Instead of asking us what we are doing with the poor we should rather ask ourselves what the poor will do with us. ")

In terms of economic policy, he called for the power of big business to be limited while at the same time promoting small-scale property ("Everyone should be able to own a cow and three acres of land", "The problem of capitalism is not that there are too many, but that there are too few capitalists." ) He called this distributism , which is characterized by the fact that ownership of the means of production is redistributed so that each family can develop its own livelihood. According to Chesterton, man is destined for a free but also hard life in the country.

His opposition to capitalism led to anti-Semitic thought patterns: He saw capitalism and Marxism as the instruments of the Jews to achieve world domination, was of the opinion that the Boer War was being waged because of the financial interests of the Jews in South Africa , and spoke in the magazine The New Witness against a policy that enabled Jews to advance in politics and society. In his writing The New Jerusalem (1920) he advocated the creation of a home for the Jews. However, Chesterton also turned against the ideology of National Socialism .

After his death he was taken over by Pope Pius XI. honored with the title of Fidei defensor (Defender of Faith). This honorary designation had previously been given to the English King Henry VIII , when he, with the help of St. Thomas More had submitted a pamphlet in defense of the Catholic faith. Chesterton has testified to the Faith in a multitude of decisive, very pointed, and original writings. This extensive aspect of his work has remained largely unknown in Germany, while Chesterton is considered an important apologist for the Catholic Church in the English-speaking world .

His short novel The Man Who Was Thursday (dt 1910. 1908 The Man Who Was Thursday ) is a political satire of fantastic literature can be attributed to: A plot of anarchist terrorists in the early 20th century, it developed, increasing alienation of reality, into a crazy-divine spectacle. As in other of his writings, Chesterton turns to theological and philosophical questions in this novel.

Chesterton's most famous literary creation is Father Brown (incorrectly translated as "Pater Brown" in older German translations), who is the focus of a total of 49 short stories, the first of which appeared in 1910 and which were published in five volumes. Brown is a clergyman who solves even the most mysterious criminal cases with psychological empathy and logical conclusions. In contrast to other well-known heroes in novels such as Sherlock Holmes and Agatha Christie's Hercule Poirot , Brown's focus is not so much on the external logic of the course of events, but on the internal logic and motivation of the perpetrator. 1953 played Alec Guinness the detective pastors in the strange ways of the Father Brown (Father Brown) . Not least from this encounter with Chesterton later Guinness' own conversion to the Catholic Church resulted . Through the filming of the Pater Brown crime short stories with Heinz Rühmann , Chesterton's work also became known in Germany in the 1960s. However, in many respects those films have been adapted to the tastes of the German 1950s / 60s. Between 1966 and 1972, 39 very faithful film adaptations were made for the Austrian-German television series Pater Brown with Josef Meinrad in the leading role.

The Incredulity of Father Brown (1926)

Published outside of collections:

The above anthologies with Father Brown stories are a small selection from the very large number of such compilations, both in English and German. The collections are seldom complete, in particular the two outside of the 5 volumes compiled by Chesterton ( The Donnington Affair and The Mask of Midas ) are usually missing . The edition published in 2 volumes as part of the Collected Works 2005 is complete.

After the first edition by Haffmanns, the German translations by Hanswilhelm Haefs have been published by Area Verlag, Erftstadt, and as a paperback by Suhrkamp.

The Napoleon of Notting Hill 1904

The Poet and the Lunatics: Episodes in the Life of Gabriel Gale (1929)

The Moderate Murderer, and the Honest Quack (1929)

The Floating Admiral, with others (1931)

The Paradoxes of Mr. Pond (posthumously 1937)