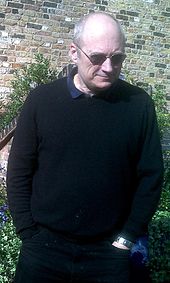 John Frederick Clute (born September 12, 1940 in Toronto ) is a literary critic, publicist and lexicographer in the field of science fiction and fantasy . He is the editor of the Encyclopedia of Science Fiction .

Clute was born in Canada but has lived in the UK since 1969. He has been married to the artist Judith Clute since 1964 and has lived in partnership with the writer Elizabeth Hand since 1996 .

He published a number of short stories from the mid-1960s, beginning with A Man Must Die (1966), which were also translated into German. He also published two novels, namely The Disinheriting Party (1979), which can only be attributed to the fantastic genre to a limited extent, and Appleseed (2001), according to Paul Di Filippo a " space opera for the 21st century".

For science fiction and fantasy literature, however, he is primarily important as the author of reviews, reviews and essays, as the editor of the Foundation and Interzone magazines, and above all as a lexicographer. Together with Peter Nicholls , who died in 2018 , he founded the Encyclopedia of Science Fiction (ESF) in 1979 and has been its editor ever since. He wrote 6,400 of the approx. 17,000 entries in the Encyclopedia of Science Fiction and worked on 1,200 others. Together with John Grant, he was editor of The Encyclopedia of Fantasy in 1997 . Both lexicons are now available in an online version, with only the ESF being continuously updated and expanded.

He wrote his first reviews for New Worlds magazine in the late 1960s . Thanks to his literary and pointed style, his reviews and essays soon drew attention to him and he published hundreds of articles in the following decades, including in Interzone , the Los Angeles Times , The Magazine of Fantasy and Science Fiction , The New York Review of Science Fiction , The Observer , Omni , The Times Literary Supplement, and the Washington Post . He was also the author of two critical columns , namely Excessive Candour (translated "Excessive Honesty", published in Science Fiction Weekly from 1997 to 2009) and Scores (translated "scores" or "evaluations", first appeared irregularly in The Infinite Matrix 2001-2003 , then regularly in Interzone from 2005 to 2008 and in Strange Horizons since 2010). His collected reviews and essays, especially the contributions from Scores , appeared in a number of anthologies. Clute is considered to be one of the most influential critics and editors in The Fantastic Today.

John Clute's work has received numerous awards and has been nominated even more frequently. He received the renowned Hugo Award and Locus Award four times each.