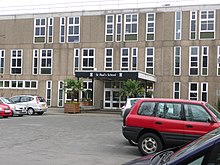 The St Paul's School was in 1509 by John Colet , the Dean of St Paul's Cathedral founded, and is one of nine schools in the Public Schools Act of 1868 based on the Clarendon Commission are called.

The cathedral had had a school since the beginning of the 12th century, but it was slowly deteriorating. So John Colet founded a new school on property north of the church. He was the son of the wealthy Sir Henry Colet (1430-1505), who had earned a lot of money as a merchant and was Lord Mayor of London twice . As the only surviving child of his parents, John Colet was the sole heir; he himself lived as a priest in celibacy , so he left most of his inheritance to the school. The school was able to afford that its originally 153 students did not have to pay any school fees. The students were, however, obliged to bring their own wax candle, which was a not inconsiderable expense at the time.

The original school building was destroyed in the great fire of 1666. The school was rebuilt in 1670. Another new building took place in 1822 on the Cheapside . But London grew very fast in the 19th century and so new school property was found in Hammersmith on the outskirts of the city. The building at 153 Hammersmith Road housed the school from 1884 to 1968. The school then moved to new buildings that had been built in Barnes next to Hammersmith Bridge .

In 1904, the administrators of the John Colet Foundation , who managed the school founder's fortune stemming from the founder's legacy, decided to set up a school for girls. The St Paul's Girls' School was at Brookgreen founded in Hammersmith, where it is located today. The school has had its own Colet Court Preparatory School since 1881 .

The school has a large number of well-known former students called Old Paulines . They include: