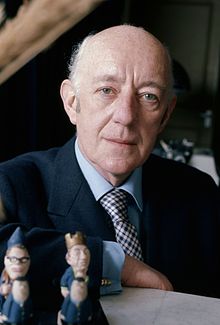 Sir Alec Guinness , CH , CBE (* 2. April 1914 as Alec Guinness de Cuffe in Marylebone , London ; † 5. August 2000 in Midhurst , West Sussex ) was a British actor . He is one of the most important film actors of the 20th century and was also known as the “man of a thousand faces” because of his extraordinary versatility.

Guinness had its breakthrough with the black comedies Adel obliged (1949), The Man in the White Suit (1951) and Ladykillers (1955) from the Ealing Studios . He became an international star through his participation in major film epics such as The Bridge on the Kwai (1957), Lawrence of Arabia (1962) and Doctor Schiwago (1965). In Star Wars (1977) he played the role of old Obi-Wan Kenobi . He is present to many German viewers through his portrayal of the Earl of Dorincourt in the television film Der kleine Lord (1980), which is repeated every Christmas . By 1996 the Oscar- winning actor appeared in over 50 films.

Alec Guinness de Cuffe grew up in poor conditions in London. He later explained in his autobiography about those circumstances: "I was born in chaos and sank into it for years: by the age of 14 I had three different names and lived in about 30 different hotels." His mother, Agnes de Cuffe, withheld from him his father's name for a lifetime, but he suspected it must be a family friend, Andrew Geddes, who kept giving them financial support.

Guinness first worked for an advertising agency and then received an acting scholarship. In 1934 he made his theater debut. Two years later he was already a member of the ensemble at the legendary Old Vic , where he took the stage with the greatest British character actors of the time, Laurence Olivier , John Gielgud and Ralph Richardson  - each of whom was later raised to the nobility.

In 1938 Guinness married the actress Merula Salaman (1914-2000). In 1940 their son Matthew was born, who later also became an actor. From 1941 Guinness served in the Second World War as a member of the Royal Naval Volunteer Service as commander of various landing ships, most recently with the rank of Lieutenant (SG) (corresponds to the German lieutenant captain ). Among other things, he was involved in Operation Husky (Invasion of Sicily) in July 1943.

In 1946 Guinness played his first film role in Mysterious Inheritance . Directed by Sir David Lean , with whom he worked again and again for decades, including the 1948 Dickens film adaptation of Oliver Twist , in which Guinness took on the role of the Jew Fagin. His portrayal was highly praised, but the conception of the character was later criticized for promoting anti-Semitic clichés. In 1949 Guinness made its breakthrough with the film Adel obligated . In this comedy he portrayed in eight roles the eccentric members of a British aristocratic family who are murdered in the course of an inheritance affair.

By the mid-1950s, Guinness had established itself as the most important comedian in British cinema. He was the defining actor in the successful comedies of Ealing Studios ( The Man in the White Suit , Ladykillers ) . In 1956 he stood in Hollywood at the side of Grace Kelly for The Swan, based on a play by Ferenc Molnár .

After his son had fully recovered from a life-threatening illness, Guinness converted to Catholicism with his wife in 1956 according to a vow he had previously taken . For the rest of his life he remained deeply connected to the Catholic faith, made several pilgrimages to Rome and took part in several Pope audiences. In this sense, he also shaped Gilbert Keith Chesterton , whose figure of Father Brown he embodied in 1954 in The Strange Ways of Father Brown for the screen.

In 1957 he played the role of principled Colonel Nicholson in David Lean's epic war film The Bridge on the Kwai, a Japanese prisoner of war. The worldwide success of the film gave Guinness a reputation as a leading character actor in the international film business; for the role he received an Oscar for best leading actor. 1959 Guinness was raised to the nobility. In the following years he played in the Graham Greene film Our Man in Havana (1959) a British agent and in the monumental film The Fall of the Roman Empire (1964) the Roman Emperor Marcus Aurelius . In David Lean's classic Lawrence of Arabia (1962) he shone in the profound role of Prince Faisal . In 1965 Lean engaged him for Doctor Zhivago, based on the novel of the same name by Boris Pasternak, for the role of Yury's half-brother Evgraf, a general in the Russian army. In addition, Guinness accompanied the plot of the film in this role as the narrator.

From the mid-1960s onwards, Guinness films and roles became increasingly less attractive. Leading roles went to British character actors of the next generation such as Richard Burton , Albert Finney and Peter O'Toole , while Guinness was cast for concise supporting roles. He played important parts in Cromwell in 1970 - Krieg dem König as King Charles I and in 1972 in Hitler - The Last Ten Days as Adolf Hitler . In 1976, with his portrayal of the blind butler Jamesir Bensonmum in A Dead Body for Dessert, he succeeded in another successful excursion into the comedy trade.

At the age of 63, Guinness made an unexpected comeback when George Lucas signed him for his 1977 space saga Star Wars . Here the bearded and hooded artist embodied as Obi-Wan Kenobi the wise teacher of the young hero Luke Skywalker and gave this role a powerful and mystical aura. The gigantic success of the film made the character actor known to a young audience and also gave him financial independence for the rest of his life. Guinness received a fee of £ 150,000, but 2% of the excess income.

However, he distanced himself from the Star Wars cult and the character of Obi-Wan Kenobis and ignored autograph requests. Guinness found the cult that had developed around himself and the personification of Obi-Wan Kenobi to be exaggerated as well as disruptive to his private life. As with Die Brücke am Kwai , he saw himself celebrated once more for a performance that, in his opinion, was not one of his best achievements. Out of gratitude to George Lucas, Guinness then appeared in the two sequels The Empire Strikes Back and The Return of the Jedi .

Guinness' and his wife's grave in Petersfield

In 1979, he played 65 years in the first television production of his career the spymaster retired George Smiley , in Tinker, Tailor, Soldier, Spy (dt. Tinker Tailor Soldier Spy ) , an adaptation of John le Carré's novel of the same , exposed a mole in British intelligence. He took up this role again in 1982 in Agent on his own behalf .

In 1980 he set standards with his interpretation of the hard-hearted Earl of Dorincourt in the classic film adaptation of The Little Lord by Frances Hodgson Burnett . Five years later he was again in front of the camera for David Lean in his last film ( Journey to India ) . After his role as Prince Faisal in Lawrence of Arabia, as an Indian Brahmin he once again provided evidence of his versatility. From the end of the 1980s, Guinness was only seen sporadically in the cinema. In Steven Soderbergh's Kafka (1991) he played Kafka's opaque office manager and supervisor. He then appeared in front of the camera for a few smaller roles in English television productions. In 1985 he published his autobiography Blessings in Disguise (Eng. The happiness behind the mask ) as well as several amusing diary volumes.

Alec Guinness, who had been privately withdrawn and had led a scandal-free life with his wife Merula for decades, died of liver cancer on August 5, 2000 at the age of 86 . His wife died around two months after him, also at the age of 86. They had been married for 62 years and were side by side in the cemetery of Saint Lawrence's Roman Catholic Church in Petersfield , county Hampshire buried.

The outwardly inconspicuous Guinness seemed at a young age neither for lovers nor for hero roles. Perhaps it was precisely this fact that was the starting point for its diverse external versatility. He presented the figures he represented with great attention to detail and precision. While as a young comedian he expressed the image of a subtle British humor, he convinced in middle years and into old age in the character subject with the personification of charismatic authority figures such as Prince Feisal and Obi-Wan Kenobi, to whom he gave the aura of superior intelligence. Apparently he could easily put himself in the shoes of other ethnic groups and immerse himself completely in them.

He was always extremely critical of himself and also downplayed his portrayal of George Smiley by declaring: "I probably screwed it up." Here he had once again succeeded in creating a figure with a remarkable depth of emotion and meaning behind almost immobile facial features to show up. John le Carré said that Guinness found a lot of himself in this figure and that Smiley finally made it their own. After that, Le Carré was no longer able to develop the character literarily. For him, the created film character Smiley and Guinness had reached congruence, although he had imagined the character he had created quite differently.

In addition to numerous other honors, Alec Guinness received three important awards from the British Crown: in 1955 he was appointed Commander of the Order of the British Empire (CBE), in 1959 he was knighted by Queen Elizabeth II as a Knight Bachelor and finally in the Order of the Companions of Honor (CH) added. In 1961 he was elected to the American Academy of Arts and Sciences .

He received honorary doctorates (DLitt) from Oxford University (1977) and Cambridge University (1991). In 1980 Dustin Hoffman presented him with an honorary Oscar for his life's work. In 1996, the Lifetime Achievement Award from the European Film Academy followed.