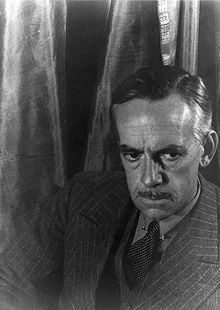 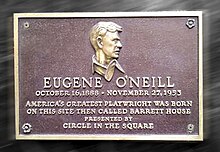 O'Neill was born the third son in a family hotel on Broadway . The second brother Edmund (* 1885) died of measles at the age of 1½ , the older brother, who was unsuccessful in his job, later became addicted to alcohol. The father James O'Neill (approx. 1846-1920) came from Kilkenny , Ireland, and was an actor. James, who had come to the United States with his parents in 1850, had worked his way up from a poor background, but could never overcome his pathological frugality. Eugene O'Neill traveled as a child with his parents and older brother James Jr. (1878–1923) on his father's tour of the United States and got to know the theater at an early age. The down-to-earth Irish Catholicism of his father and the more mystical piety of his mother, Ellen Quinlan (approx. 1858–1922), were the basis of Eugene's concern with God and the religion that would characterize his dramas .

Eugene O'Neill later blamed his father for the nightmarish insecurity of his early life ("I had no childhood") as well as his mother's drug addiction (who refused to go to the theater). When not touring with the family, he attended various Catholic boarding schools until, as a teenager, he managed to switch to a non-denominational school. He spent the summer holidays in the family's only permanent home, a modest home in New London, Connecticut , overlooking a river called the Thames. After graduating from high school, he enrolled at Princeton University in the fall of 1906 , but was dismissed in June 1907 for breaking the rules. He had thrown a beer bottle through a window of the university president and later US president Woodrow Wilson .

After that, he switched from one job to another. First of all, who hadn't been in the mood for college anyway, he found a secretary position in a dubious New York mail order business in which his father was involved. After it closed, he married the young New Yorker Kathleen Jenkins on October 2, 1909. The marriage was frowned upon by his family and in the same year he set off with a mining engineer as a gold prospector for Honduras , but had to return to New York in March 1910 because of malaria , where the couple met before their son Eugene Jr. separated. He didn't get to know his father until he was eleven or twelve years old.

Eugene O'Neill's father made him the "assistant manager" of the company, and O'Neill traveled with her from St. Louis, Missouri to Boston. Eugene, little interested in the job, embarked on his first sea voyage soon after the end of the season. The journeys as a sailor to South America (65 days on a Norwegian ship from Boston to Buenos Aires) and South Africa brought him into contact with shiver people , uprooted and outcasts of all kinds, after whom he shaped many of his characters. In Argentina he first found employment in the technical drawing department of the Westinghouse Electrical Company, then in a wool packing plant in La Plata , and finally in the office of the Singer sewing machine factory in Buenos Aires . This was followed by a sea voyage to Durban in South Africa and back as a mule keeper on a cattle truck. After that he was completely destitute for a long time and led the life of a homeless person in the waterfront and on the beach of Buenos Aires and later in New York and Liverpool and became a drinker. Eventually he hired himself as an ordinary seaman on a British tramp ship that took him to New York. This was followed by his last voyage to sea as a sailor on the America line New York – Southampton.

When he was 23 years old, his life was getting better again. He appeared in a small role in his father's troupe in the 1911/12 season and - having returned to New London with the family after 15 weeks - worked for almost six months as a reporter for the New London Telegraph , to whose poetry column he was from August to December 24 - mostly satirical - poems, contributed. The publisher of the newspaper, Frederick P. Latimer, was sympathetic to him, despite their fundamentally different views. Latimer was also the first to realize that O'Neill had great talent, even though he considered him the most stubborn and incorrigible social rebel .

After attempting suicide in 1912 and divorcing his brief marriage to Kathleen Jenkins that same year, his health collapsed in December 1912. He stayed at Gaylord Farm in Wallingford, Connecticut, a sanatorium , for five months to cure his tuberculosis . He was not tied to the bed because the therapy relied on physical hardening. Here not only has his health been restored to some extent - i. H. the progression of the disease stopped - it was also the turning point of his previously aimless life.

New start as a playwright

In the sanatorium he read obsessively works by Ibsen, Strindberg, Nietzsche and Dostoevsky and felt driven to become a dramatist. For the first time he felt the urge to write pieces and to process his previous experiences. After his release in the late spring of 1913, he spent some time at home, and when the season started again, he moved to live with an English family friend, whose house overlooked Long Island Sound. He stayed here for over a year, read, rested, played sports, hardened himself by daily morning swimming, even all winter long, in the sound and, above all, wrote. In about 15 months he wrote eleven one-act plays, two multi-act dramas and a few poems.

For his drama Beyond the Horizon , O'Neill received the Pulitzer Prize in 1920 . As the first American playwright, he was awarded the Nobel Prize in Literature in 1936 for the strength, honesty and deeply felt feelings in his dramatic work, which embodies an independent idea of tragedy .

Again and again O'Neill devoted himself in his pieces to the internally broken characters who try to escape the responsibility of their lives through self-deception and intoxication. With radical honesty he reveals the abysses of his characters, which consist of repressed guilt, false feelings and resignation and are entangled in a senseless struggle with one another. O'Neill's references to Greek tragedy become clear not least in the trilogy " Mourning must carry Elektra " (1931), which is his tragic response to the search for meaning in life.

A thematic focus, to which O'Neill's work can almost entirely be assigned, forms in many of his works the accusing confrontation with “the divine power of existence, the attempt to justify man through himself, through the inner greatness in enduring suffering Fail."

The most striking are the connections between O'Neill's own life and his work in the piece One Long Day Journey into the Night , completed in 1941 , whose publication O'Neill had only allowed in his will 25 years after his death, but which his widow Carlotta released in 1956 . In the dedication of the play he wrote to his wife: "I am giving you the original manuscript of this play, it is about old suffering, written with tears and blood." In the person of Edmund, the person who seeks support in a world that has become unpredictable and meaningless , he had created his own reflection.

Stressful family circumstances were repeated in his private life as well. His third wife sued him in 1946 for "mental cruelty". He lost his son to suicide. His daughter Oona O'Neill , who was later married to Charlie Chaplin , tried in vain to get in touch with O'Neill. Marked by Parkinson's disease and neuritis , he destroyed a considerable part of his work shortly before his death.

The special role O'Neill played in the development of modern American drama is pointed out in various literary publications. It is said that his work turned American theater into tragedy. Of the author's few comedies, only Ah, Wilderness! (1933), who portrayed a happy family on Independence Day in 1906, was better known.

In 1953 he died of tuberculosis in a Boston hotel.

In addition to the Nobel Prize for Literature (1936), he received four Pulitzer Prizes for Drama (1920, 1922, 1928, 1957). O'Neill was inducted into the American Theater Hall of Fame . In 1923 he was elected a member of the American Academy of Arts and Letters and in 1935 of the American Philosophical Society . The Eugene O'Neill Memorial Theater Center was founded in Waterford in 1964 , just as the Coronet Theater in Midtown Manhattan was renamed The Eugene O'Neill Theater in 1959 , which still exists today under changing owners and mainly performs musicals. His New London home , Monte Cristo Cottage, was listed on the National Historic Landmark in 1971 . His home in Danville, near San Francisco , became the Eugene O'Neill National Historic Site in 1976 .