Susan Hayward on the cover of Yank Magazine (1945) 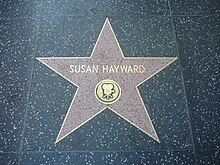 Susan Haywards star on the Hollywood Walk of Fame

Susan Hayward was born in Brooklyn in 1917, the youngest daughter of Ellen and Walter Marrenner . She had two older siblings, her sister Florence and her brother Walter Jr.

At the age of seven she was seriously injured in a traffic accident, spent months in a cast and later had to learn to walk again on crutches. Edythe Marrenner spent most of her free time in the cinema and dreamed of a film career.

She began her professional career after graduating from high school as a model for newspaper advertising and mail order catalogs . An employee of the film producer David O. Selznick became aware of her at a hat fashion show . Selznick invited Edythe Marrenner then to screen test for the role of "Scarlett O'Hara" in the planned film version of Gone with the Wind ( Gone with the Wind ) one to Hollywood. Although she came close to the character of Scarlett O'Hara from the outside, she did not get the coveted role due to a lack of experience, but her first film contract. Based on the name of the actor Leland Hayward, whom he admired, Selznick gave her the stage name Susan Hayward .

One of her first roles played Susan Hayward in 1938 on the side of Ronald Reagan in the drama Girls on Probation ("Girls on Probation"); she played in a supporting role the arrogant and elegant Gloria Adams , who accuses another woman of stealing a dress from her. A year later she starred at the side of Gary Cooper and Ray Milland in William A. Wellman's classic adventure game Three Foreign Legionnaires (Beau Geste) .

She became known in 1942 through a supporting role in the adventure film Reap the Wild Wind ("Pirates in the Caribbean Sea") on the side of Ray Milland , John Wayne and Paulette Goddard ; she played the role of Drusilla Alston , who falls in love with a sympathetic sailor, hides in a basket on board a ship in the storage room. The ship is attacked by the pirates and also pulls Drusilla into the depths. It was the first time Susan Hayward died in a movie. She then directed the adventure film The Forest Rangers ("The Fire Jumpers of Montana") with Fred MacMurray and Paulette Goddard and the comedy I Married a Witch ("My Wife, the Witch") with Fredric March and Veronica Lake .

Susan Hayward only became a star in 1947 through the role of alcoholic Angie Evans in the drama Smash-Up: The Story of a Woman , for which she was nominated for an Oscar for the first time . In the same year she played the lead role alongside Robert Cummings in The Lost Moment (" Letters from Beyond "), the film adaptation of a novel by Henry James . In this romantic horror film set in Venice , Susan Hayward played Tina Borderau , who at night thinks she is her great-aunt. In 1949 she made House of Strangers with Edward G. Robinson , a drama from the milieu of Italians living in the United States.

In the 1950s , Susan Hayward made two films with Gregory Peck : on the one hand, David and Bathsheba in 1951 , the film adaptation of an episode from the Bible with Gregory Peck as King David and Susan Hayward as Bathsheba, in which King David in love, although she is his general's wife; on the other hand in 1952 The Snows of Kilimanjaro ("Snow on Kilimanjaro"), the film adaptation of the eponymous short story by Ernest Hemingway with Gregory Peck as the writer Harry Street , who searches for the meaning of his life on a safari.

In the same year Susan Hayward directed Robert Mitchum's The Lusty Men ("Arena of the Cowboys"), a drama from the milieu of the rodeo riders, and in 1953 the adventure film White Witch Doctor ("White Woman in the Congo"). In The President's Lady , a film about the marriage of the future US President Andrew Jackson , she played the divorced Rachel Donelson , while Charlton Heston played Andrew Jackson.

In 1955 she directed the adventure film Soldier of Fortune with Clark Gable , the Western Garden of Evil with Gary Cooper and Richard Widmark and the comedy Top Secret Affair with Kirk Douglas . In the historical adventure film The Conqueror ("The Conqueror") she was seen at the side of John Wayne. John Wayne played one of his most unusual roles in The Conqueror : the Mongol general Temujin , later known as Genghis Khan . In the monumental film Demetrius and the Gladiators ("The Gladiators"), Susan Hayward played the Roman Messalina , who falls in love with the Christian gladiator Demetrius . Demetrius was played by Victor Mature .

1956 Susan Hayward won the Best Actor Award at the Cannes Film Festival in 1956 and her fourth Oscar nomination for the presentation of the singer and actress Lillian Roth , the temporarily succumbs to alcohol, in I'll Cry Tomorrow ( " Tomorrow shall I cry "), a film adaptation of the autobiography of the same name by Lillian Roth. In 1958, Susan Hayward finally received the coveted Oscar for the haunting portrayal of the condemned prostitute Barbara Graham in I Want to Live (" Let Me Live ").

The 1959 western Thunder in the Sun tells the story of a group of emigrants from the Basque Country who crossed the American west to California; the male lead played Jeff Chandler .

In the 1960s , Susan Hayward directed the drama Ada with Dean Martin and the comedy The Marriage-Go-Round with James Mason . In the drama Where Love Leads , she was seen at the side of Bette Davis . Susan Hayward played the unhappily married Valerie Hayden , who is bullied and driven to death by her mother, played by Bette Davis.

In 1968 Susan Hayward appeared for the only time on a theater stage; she played the title role in the musical Mame . In 1972 she finally played one of her last roles in the western The Revengers ("The Avenger") on the side of William Holden and Ernest Borgnine .

The film Happiness in His Arms , which she directed in 1962 alongside Michael Craig , is likely to have a special meaning in the career and life of Susan Hayward . In it she played a do-it-yourself woman suffering from an incurable brain tumor who, after an operation that only postponed the illness, rediscovered the true values ​​of life through a love affair. At the end of 1972 the actress, who suffered from increasing headaches, was indeed diagnosed with such a tumor. In April 1973 she underwent chemotherapy , which could only delay the course of the disease. By the end of the year she was paralyzed on one side. In April 1974 she made one last public appearance on the occasion of the Academy Awards and presented the award for Best Actress .

Years later, Hayward's death was linked to the shooting of The Conqueror , which took place in 1955 in Utah, not far from the site of the first American nuclear weapons tests. An accumulation of participants who died of cancer , including John Wayne , Agnes Moorehead , John Hoyt , Pedro Armendáriz and director Dick Powell, served as evidence for a causal connection . In total, 91 of the film's 220 crew members developed cancer.

Susan Hayward was married to her colleague Jess Barker from 1944 until their divorce in 1954. There are twin sons from the marriage. In 1957 she married the dentist Floyd Eaton Chalkley, who died in 1966.