Frederick "Fred" Martin MacMurray (born August 30, 1908 in Kankakee , Illinois , † November 5, 1991 in Santa Monica , California ) was an American actor . He became known for roles in romantic comedies - alongside Claudette Colbert , among others - and in family films , and in the late 1930s he had his breakthrough. MacMurray also slipped into dramatic roles, for example in Billy Wilder's classic film Woman Without a Conscience (1944). 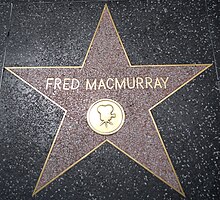 MacMurray's star on the Hollywood Walk of Fame

Fred MacMurray, the son of a concert violinist, played the saxophone himself for a while in various big bands, including with George Olsen . From 1930 he took on roles in the theater. He made it to Broadway , where he starred in the musical Roberta . In 1934 he signed a contract with Paramount . In 1935 he had his breakthrough on the side of Claudette Colbert in The Gilded Lily . His talent for light comedies made him the ideal partner of Colbert, and the two were a popular screen couple in a total of seven films by 1949 , mostly in romantic comedies. MacMurray also played alongside other stars such as Irene Dunne , Carole Lombard and Marlene Dietrich . His occasional excursions into the dramatic field, such as in Maid of Salem , which showed MacMurray and Colbert as fighters against the witch craze of the Puritans in Salem, fell through at the box office. With Madeleine Carroll , he shot a total of four films , beginning with Café Society , between 1939 and 1942, directed by Edward H. Griffith .

In the mid-1940s, the actor increasingly switched to more substantial roles. In 1944 he succeeded in a convincing dramatic representation alongside Barbara Stanwyck under the direction of Billy Wilder in the film noir classic Woman Without a Conscience . In it he played an average citizen, an insurance agent who, out of love for a ruthless woman, becomes an accomplice to murder. With his portrayal of a writer calling for mutiny in The Caine Was Her Fate (1954) alongside Humphrey Bogart , he made the leap into the character field. In the following years, MacMurray was mostly seen as a friendly hero in family-friendly adventures, with the exception of Billy Wilder's tragic comedy The Apartment , in which he brings bad luck with his infidelities Shirley MacLaine and Jack Lemmon . He also shot some hits for Walt Disney such as The Flying Timpani and its sequel The Timpanist Can't Quit . In The Happiest Millionaire , MacMurray starred in one of his few musical roles alongside Tommy Steele and Greer Garson . He had great success on American television between 1960 and 1972 as a single father in the family series My Three Sons , of which a total of 380 episodes were filmed. In 1987, Fred MacMurray was declared a Disney legend . He was the first living artist to receive this honor.

Fred MacMurray was married twice. In the 1940s he became a real "face model" for the superhero Captain Marvel . On November 5, 1991, at the age of 83, he died of pneumonia in Santa Monica as a complication of a long-standing cancer. His remains are buried in Holy Cross Cemetery in Culver City , where his second wife June Haver was buried after her death in 2005.