The city was founded in 1913 by Harry Culver . The first film studio was built by Thomas Ince in 1915 , bought by Samuel Goldwyn in 1918 under the name Triangle Studios , and Metro-Goldwyn-Mayer (MGM) headquarters in 1924 under the name MGM Studios . In 1918 Ince opened a second studio, now known as Culver Studios , which he held until his death in 1924. Other well-known entrepreneurs in the film industry did the same and opened studios in Culver in the 1920s, including Silent Film and Hal Roach Studios , where u. a. the comedies were filmed with Laurel and Hardy and the little thugs .

As a result, Culver City soon became a leading center for “moving images” alongside Hollywood . With the end of the so-called Golden Age of Hollywood, Culver's decline began: Smaller studios disappeared, large studio lots were rolled down and sold for various real estate projects and residential buildings in the 1960s and 1970s; the remaining studios, however, were mostly set up for television productions.

The turn of the decline is considered to be the settlement of the film studio Columbia Pictures (later Sony Pictures Studios ) acquired by Sony in the 1990s, which moved from the shared studio property with Warner Bros. in Burbank to the former MGM Studios in Culver. This means that Culver City is again the seat of a so-called Hollywood major . 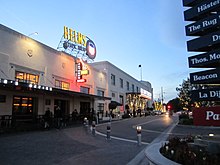 Since the 1980 census, the city's population has remained almost stable.

The Kirk Douglas Theater of Culver City at night

In the annual financial report 2011, the city administration names the city's largest employers: