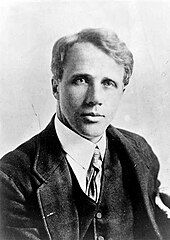 Robert Lee Frost is almost always associated with New England , but was born in San Francisco and lived there until he was twelve. His mother Isabelle Moodie Frost was of Scottish descent, his father William Prescott Frost Junior was the descendant of English immigrants who landed with the Wolfrana in what is now New Hampshire in 1634 .

After his father died of tuberculosis on May 5, 1885 , Frost and his family moved to Lawrence , Massachusetts , to live with his grandfather, William Prescott Frost Sr. , who was a factory overseer there. Here, at the insistence of his mother, Frost was baptized in the New Church , of which she herself belonged. Frost left this church as an adult.

Frost is best known for his poetry about rural New England, but published his first poems during his life in the city (at the time Lawrence was one of the largest cities in Massachusetts). After high school he graduated from Dartmouth College (a College of the Ivy League ; actually he aspired to study in Harvard , where he was indeed adopted, but for financial reasons could not study), where he joined the fraternity joined Theta Delta Chi. Then he worked, back in Lawrence, among other things as a teacher and on the side as a newspaper deliverer and factory worker. 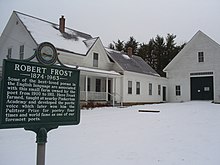 After a trip to the Great Dismal Swamp National Wildlife Refuge on the Virginia and North Carolina borders , he proposed marriage to Elinor Miriam White , which she accepted (an earlier proposal she had turned down because she wanted to wait to graduate from St. . Lawrence University ). Frost and White were later married in the chapel of Harvard University, where he studied for two years after his trip.

Although he was a good student, he left university to better finance his growing family. His grandfather bought him a farm in Derry, New Hampshire shortly before his death. Frost worked here as a farmer for nine years. He wrote many of his later popular poems before starting his daily work at 6:00 a.m. Since he had no long-term success with farm work, he began working again as an English teacher, this time at Pinkerton Academy (now Plymouth State University , New Hampshire).

In 1912, Frost and his family left the United States to immigrate to the United Kingdom . At first he lived in Glasgow , later he settled in Beaconsfield , a suburb of London . His first collection of poems, A Boy's Will , was published the following year.

During his life in London, Frost met many important European poets and writers, including Thomas Ernest Hulme , Edward Thomas and Ezra Pound (who himself emigrated to Great Britain as an American writer). It was the latter who later wrote one of the most widely acclaimed reviews of Frost's work. In England, Frost wrote many of his later famous poems.

The Frost family grave in Bennington

After the outbreak of World War I , he returned to the United States in 1915, where he bought a farm in Franconia , New Hampshire. Here he took up his activity as a teacher again; he became a professor of English at Amherst College . In 1922 he wrote one of his most famous poems: Stopping by Woods on a Snowy Evening ( behaving on a snowy evening in the forest ). He was elected to the American Academy of Arts and Letters in 1916, the American Academy of Arts and Sciences in 1931, and the American Philosophical Society in 1937 .

Until his death on January 29, 1963, Frost worked at Amherst College, where his chairs and academic functions changed. During much of this time he taught courses at the Bread Loaf School of English ( Ripton , Vermont ) at Middlebury College , where mainly American high school teachers continue their qualifications.

From 1940 onwards, Frost spent the winters in his house near Coconut Grove / Miami .

Robert Frost died in Boston, Massachusetts, aged 88 . He was buried in the family grave at Old Bennington Cemetery in Bennington , Vermont . Before his death, the later Oscar- winning documentary Robert Frost: A Lover's Quarrel with the World was completed.

In his lyrical work, Frost repeatedly addresses his homeland. Many of his poems are nature poems describing the New England countryside. Frost developed his own theory of poetry, in which the metaphor as the basis and the mixture of strict meters with natural speech rhythms of the English language play central roles. Frost received the Pulitzer Prize for four of his volumes of poetry. He is one of the most important poets of the 20th century. There are parallels to Emily Dickinson .

In the 1977 film Telephone, directed by Don Siegel , Soviet sleepers are activated by a verse from Frost's poem Stopping by Woods on a Snowy Evening , who then commit acts of sabotage.

In the third part of the Twilight series Eclipse - Biss zum Abendrot by author Stephenie Meyer , the poem "Fire and Ice" is quoted at the beginning of both the book and the film of the same name.