In 1769, the college was initially founded as a school for Indians by the Protestant clergyman Eleazar Wheelock and the physician, scientist and surgeon Nathan Smith (1762-1829).

The project was financially secured when one of the first students, Samson Occom , a native of the Mohegan tribe , was able to raise capital through donations. Thus, on December 13, 1769, the college could on a land donation from the royal governor of New Hampshire (then a British colony ), John Wentworth , by a charter from George III. to be founded. The college was named after William Legge , the second Earl of Dartmouth , a supporter of Wheelock. The college is committed to educating "the youth of the Indian tribes , English youth and others."

In 1816 the independent college came under greater state influence. For this purpose, the charter from the colonial era was declared invalid and the college was converted into the state university "Dartmouth University". The then President Francis Brown (1815-1820), however, fought before the US Supreme Court for the independence of the college. Dartmouth was represented by Dartmouth alumnus and attorney Daniel Webster . Finally, Chief Justice John Marshall ruled in favor of “Big Green”, paving the way to secure independence from private institutions ( “thereby paving the way for all American private institutions to conduct their affairs in accordance with their charters and without interference from the state ". ). This case ensured independence from private universities and is known as the "Dartmouth College Case" . 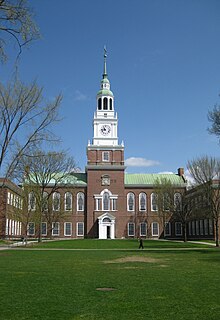 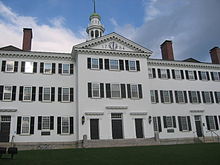 The main focus of Dartmouth is the education of "undergraduates", i.e. students in their first university education. In 2013 around 4,200 “undergraduates” and 2,100 “graduates” were studying in Dartmouth, and 40 institutes and research projects were based there.

Geisel School of Medicine at Dartmouth

The Dartmouth Medical School was founded in 1797 and is the fourth oldest medical school in the US. In 2012 it was named after the American children's book author Theodor Seuss Geisel and his wife Audrey.

The Thayer School of Engineering was founded in 1867 as the first engineering school in the USA. It is named after Sylvanus Thayer , who made the foundation possible with a donation of over $ 40,000.

In 1900 the Tuck School of Business was founded under the name Amos Tuck School of Administration and Finance as the world's first graduate school for management.

Dartmouth College's sports teams are (unofficially) called The Big Green . Dartmouth College belongs to the so-called " Ivy League ", like several universities in the northeastern USA (such as Harvard , Yale , Princeton and others).