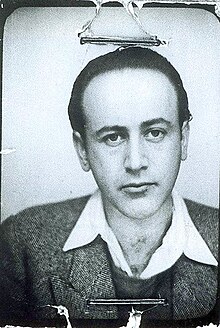 Paul Celan is considered one of the most important German-speaking poets of the 20th century. His work is shaped by the reflection on the possibility of language and communication in general and by the processing of borderline experiences, especially the experience of the Holocaust (for example in the famous poem Death Fugue ). Celan's work shows a development from traditional poetry forms to a later phase, which is characterized by a "breathless silence of silence in the word that has become cryptic".

Paul Celan was born in Chernivtsi, the capital of Bukovina , then northern Romania, into a German-speaking Jewish family. He was the only son of Leo Antschel-Teitler (* 1890 in Schipenitz near Czernowitz) and his wife Friederike (nickname: "Fritzi") born. Schrager (* 1895 in Sadagora ); first apartment on Wassilkogasse in Chernivtsi.

Celan attended first the German, then the Hebrew elementary school, five years the Romanian state high school (the former Imperial and Royal Higher School in Chernivtsi ) and the Ukrainian state high school until graduation on June 3, 1938. He began to study medicine in the same year tours , but returned after a year after Romania back to where Romance languages to study. In mid-1940, northern Bukovina and thus Celan's hometown of Chernivtsi was occupied by the Soviet Union . Celan was initially able to continue his studies. But when 1,941 Romanian and German troops occupied Czernowitz, the Jews were in the local ghetto forced from where Celan's parents in June 1942, first in a quarry and then in the forced labor camp Michailowka far from Haisyn deported were. His father died of typhus there a few months later , and his mother was killed by an SS man . The deportation and the death of his parents left deep marks on Paul Celan. He suffered for the rest of his life feeling that he had abandoned his parents. There are numerous references to this trauma of survival guilt in his poems .

On the advice of his friend Ruth Lackner , Celan signed up for labor in July 1942 in order to avoid the threatened deportation. He was then held in the Tăbărăşti labor camp not far from Buzău until it was dissolved in February 1944 and, with a few interruptions, during which he returned to the Chernivtsi ghetto, had to do forced labor in road construction. After the capture of Chernivtsi by the Red Army in August 1944, Celan returned to Chernivtsi in December 1944 and resumed his studies. In 1945 Celan moved to Bucharest and continued studying there. He later worked there as a translator and editor. In 1947 he fled to Vienna via Hungary and moved to Paris in 1948. In the same year, his first volume of poetry appeared in Vienna with The Sand from the Urns , the entire edition of which, however, he had crushed due to numerous typographical errors.

In May 1948 Celan met Ingeborg Bachmann in Vienna , with whom he had a love affair at the end of the forties and the beginning of the fifties, which was resumed in Paris from October 1957 to May 1958. This relationship is confirmed by Celan's diaries and the posthumously published correspondence between Bachmann and Celan. Your correspondence is archived in the German Literature Archive (Celan) and in the Austrian National Library (Bachmann). The correspondence appeared in August 2008 under the title Herzzeit in Suhrkamp Verlag. Paul Celan's poem Corona and many others from the collection of poems Mohn und Gedächtnis were addressed to Ingeborg Bachmann. In Paris, in November 1951, Celan met the artist Gisèle Lestrange , whom he married a year later and who worked with him artistically at times (e.g. etchings for the breath crystal cycle of poems in 1965 ). In 1952, the Deutsche Verlags-Anstalt in Stuttgart published his volume of poems Mohn und Gedächtnis with the much acclaimed poem Death Fugue , which addresses the murder of European Jews by the National Socialists. In 1955 Celan received citizenship of the Republic of France. In 1955 his son Eric (anagram to “écris!” (Without the silent “s”), French for “write!”) Was born after his wife Gisèle had lost a child two years earlier.

In the 1950s, Celan began to grapple with Heidegger's philosophy and, conversely, Heidegger read Celan's works. Celan was taken with the great importance Heidegger attached to poetry in his philosophy. In addition, the two shared a lively interest in Holderlin . They met on July 24, 1967 in Freiburg and the day after went on a trip to Heidegger's hut in Todtnauberg . Todtnauberg also became the title of a poem that Celan wrote on August 1, 1967. Further visits followed and there was an exchange of letters. Celan's relationship with Heidegger was ambivalent, but friendly.

In 1960 the serious, unfounded allegations of plagiarism of Claire Goll , the widow of the Jewish poet Yvan Goll , with whom Celan had been friends and for whom he had translated poetry, intensified . In 1954 Celan had published the poem In the guise of a boar , which begins with the words: "In the shape of a boar / your dream stomps through the woods on the edge / in the evening." In 1953 Goll wrote in a poem: "The boar with the magical Triangular head / You stamp through my rotting dreams. ”The literary critic Curt Hohoff had drawn attention to the similarity of both verses in 1956 and interpreted them as evidence of Celan's epigonality . Claire Goll even saw it as plagiarism. The subsequent "Goll Affair" was lively discussed in the German feature pages, sometimes with anti-Semitic undertones. The injuries Celan sustained from the allegations made against him haunted him for the rest of his life.

Celan was admitted to psychiatric clinics several times, once - from November 28, 1965 to June 11, 1966 - because in a state of madness he wanted to kill his wife with a knife. In November 1967, he and his wife decided to live separately from each other. But they stayed in touch.

In December 1967 Celan traveled to West Berlin , where he visited the Plötzensee memorial and a Christmas market. He also wrote the poem DU LIEGST in the great Gelausche , which recalls the murder of Rosa Luxemburg and Karl Liebknecht in Berlin in 1919.

In October 1969, a few months before his death, Celan made his only trip to Jerusalem . He met Gershom Scholem , among others, and during readings he met old friends from Bukovina and Israeli poets such as Jehuda Amichai and David Rokeah . The focus was on reuniting with his childhood friend Ilana Shmueli , who came from Chernivtsi . Carried by numerous biblical allusions, the poems, which were created in the tradition of Jewish Jerusalem poems, combine the courtship for Jerusalem with erotic eulogies to his beloved. Evidence of these encounters are her correspondence, the memoirs of Ilana Shmueli under the title Say that Jerusalem is and the poems of Celan, which were included in the Zeithöft estate volume after his death . They are regarded as evidence of "Celan's difficult confrontation with his Judaism".

The circumstances and date of Celan's death are not clear. He is believed to have committed suicide on April 20, 1970 by throwing himself into the Seine at the Pont Mirabeau in Paris . Celan's body was recovered from the Seine on May 1, 1970 ten kilometers downstream near Courbevoie . He was buried on May 12, 1970 on the Cimetière parisien de Thiais in the Val-de-Marne department . On that day, Nelly Sachs , with whom he was on friendly terms, died.

In 1988 the German Literature Fund donated the Paul Celan Prize for outstanding translator work in honor of the translator who did the work .

Celan and the group 47

One of the first public appearances of the then largely unknown Paul Celan took place in May 1952 at the Group 47 conference in Niendorf . The reading came about through the mediation of the Viennese friends Ingeborg Bachmann , Milo Dor and Reinhard Federmann , but it was a failure. Already Milo Dor's letter to Hans Werner Richter to invite Celan "absolutely" - "I know what you think of his poems, but I believe that there are only a few lyricists who have his musicality and his formative power" - left in advance (1951) recognize the negative attitude of the founder of the group and convinced realist judges.

Walter Jens remembered Celan's reading in a conversation with Heinz Ludwig Arnold in 1976 : “When Celan appeared for the first time, they said: 'Hardly anyone can hear that!' He read very pathetically . We laughed at it, 'He reads like Goebbels !' Said one. [...] The death fugue was a failure in the group! That was a completely different world, the neorealists couldn't keep up . " Hans Weigel added," that afterwards some colleagues scornfully chanted: ' Black milk of the morning  ...' "and that Hans Werner Richter was of the opinion Celan I read "in a chant like in a synagogue ". Celan himself commented in a letter to his wife Gisèle: "Those who do not like poetry - they were in the plural - rebelled."

Looking back, Toni Richter gave an assessment of the events in her documentation: “The saddest event was Paul Celan's reading, a misunderstanding that was due to the nature of his lecture. I think none of the returnees from the war in the group knew the name and fate of Paul Celan, nor had they heard of the tradition of Jewish-Romanian poetry recitation in a rhythmically high tone. The question of style, 'Littérature pure' or 'engagée', was pointless. Celan asked in the room whether Rimbaud was unknown here, who also resolved verses into musical vibrations. ”At least during the reading, the chief editor of the Deutsche Verlags-Anstalt became aware of Celan, who published Mohn und Gedächtnis in December . Ernst Schnabel organized a reading in the NWDR after the conference . Despite subsequent invitations, Celan did not attend any of the Group 47 meetings.

Pronunciation of the name

Across Ernst Schnabel ( NDR ) was Celan pronunciation guide, "that I did not utter my name French, but t s e l a n, ie without nasal sound at the end, and emphasis on the first syllable." According to Brigitta Eisenreich, whom Celan met in Paris in 1952, the emphasis “at some point slipped onto the second syllable”. She recommends “to make home again” the stress Celan himself used on the first syllable.

In Romanian, the name is pronounced like Tschelan (analogous to Antschel).

Celan's estate is in the German Literature Archive in Marbach . Parts of it can be seen in the permanent exhibition in the Museum of Modern Literature in Marbach, especially the typescript of the death fugue .

In the overview of the Celan handbook on international Celan reception, Celan is referred to as one of the “most intensely perceived poets of German-language world literature”, similar to Goethe , Hölderlin or Kafka . According to Wolfgang Emmerich , he and a few authors such as Primo Levi , Nelly Sachs and Imre Kertész have “been internationally outstanding for the possibility of poetry in the 'face of the Shoah ' for 50 years now ”. This applies to both his lyrics and his poetics. His "almost unique effect in world literary terms" consists in the fact that he " writes in a language that has" passed through the atrocities of mass murder "without" ever attaching to the illusion of writing about " Auschwitz and the millions of victims using the means of image realism can".

Celan's birthplace in Chernivtsi. He lived here with his family for 13 years in a very confined space in the basement by the back garden (today an asphalt courtyard) (2011) 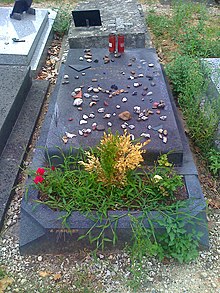 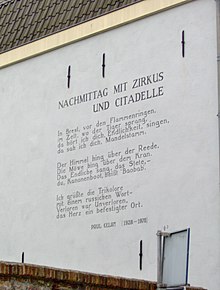