The family name Lermontow goes back to the Scotsman Georg Lermont, who came to Russia as a prisoner of war in 1613 and entered Russian military service.

In 1981 the asteroid (2222) Lermontov was named after Mikhail Lermontov.

Mikhail Jurjewitsch Lermontow was born on October 15, 1814 in Moscow. After his mother's early death, he grew up on the estate of his grandmother Jelisaveta Alexejewna Arsenjewa in the Penza governorate without his father. Family disputes over inherited wealth left the growing boy with an aversion to the power of money. Life on his grandmother's estate brought him into contact with the world of the serf farmers and awakened his understanding of their often desperate situation.

Mikhail Lermontov, painted in watercolors by Kirill Gorbunow two months before his death

While studying at Moscow University on full board, which was normally only given to aristocrats, the fourteen-year-old began to write poetry under the guidance of his teachers D. Dubensky, A. Merslyakov and S. Raitsch. From 1828 to 1832 he studied at Moscow University . Before he was expelled from the university in 1832, due to disagreements with professors, he wrote more than 200 poems. These youthful poems, collected in the Lyrisches Tagebuch between 1828 and 1832 , are precocious, heavy-handed, sonorous, melodic and emotional at the same time. They reflect a lyrical hero's relationship to his environment, which appears threatening and gloomy to him.

Subsequently, Lermontov attended a cavalry school in Saint Petersburg and was assigned to a bodyguard hussar regiment in Tsarskoye Selo in 1834 .

In 1837, Lermontov dedicated his poem The Death of the Poet to the Russian national poet Alexander Pushkin , who was fatally injured in a duel. Thereupon Lermontov was exiled to a military regiment in the Caucasus . So he was able to experience the Caucasus and the war of the Russian tsarist empire against the indigenous population there. In 1838 he was allowed to return to Saint Petersburg. His duel with the French Ernest de Barante led to another transfer to the Caucasus. There Lermontov found his death in July 1841 in a duel with Nikolai Martynov.

In his youth poems such as B. The Prisoner in the Caucasus (1829) he still imitated Pushkin. His style, however, quickly became sovereign, which was also evident in the change in the topics covered, for example in the poem Das Segel (1832).

In poems such as The Day Comes (1831) or The Last Son of Freedom (1832), the poet reflected with great force the thoughts and feelings of members of the rebellious student circles; his outrage at serfdom, hatred of tsarist autocracy and his passionate pursuit of freedom.

In his 1832-1834 written and unfinished novel Wadim , he described the Pugachev uprising . In it he campaigned for oppressed peasants. In the four-act verse drama Masquerade , written around 1835 , Lermontov attacked the highest aristocratic society, which is why the tsarist censors prevented its publication.

During his transfer to the Caucasus, he made the acquaintance of exiled Decembrists and Georgian intellectuals. Impressions of the life and customs of the mountain peoples and the nature there strengthened his creative power and provided new topics. Seals such as Die Fürstin Ligowskaja (1836), Kerib der Spielmann (1837), Borodino (1837), Das Lied von dem Tsar Ivan Wassiljewitsch, from his bodyguard and the daring merchant Kalashnikov (1837), Mzyri (1840), The Demon (1841) ) or Mein Vaterland (1841) date from this time.

“Russian literature has not exhausted its legends and history. […] Lermontow […] wrote a historical epic in fluency, meter and vocabulary of the people: the song about the merchant Kalashnikov. But at this highest level - this epic song is beautiful and its importance in Russian literary history - the use of the people's intellectual heritage and the continuation of the people's spiritual life in modern life ended. "

In the novel A Hero of Our Time (1840) the tragedy of the educated and free-thinking youth of his time is portrayed, who were dissatisfied because of the social stagnation, felt lonely and saw life as null and void. With this work he created important prerequisites for the development of a psychological novel in Russia as a genre and is therefore considered the founder of Russian realism . 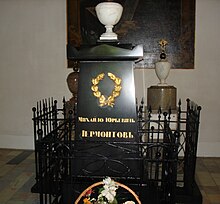