House of German Business in Berlin (2017)

The Federation of German Industries e. V. ( BDI ) is the central organization of German industry and industry-related service providers . The BDI currently has 35 members, including a working group consisting of 6 associations that share membership. He speaks for 40 industry associations and more than 100,000 companies with around 8 million employees. Membership is voluntary. A total of 15 state representations represent the interests of business at regional level. The headquarters of the BDI is in the House of German Business in Berlin ; between 1950 and 1999 it was in the House of German Industry in Cologne . In addition, the BDI has additional offices abroad and is therefore represented internationally. Dieter Kempf has been President of the BDI since January 1, 2017 . On April 1, 2017, Joachim Lang was appointed as the new General Manager by the BDI's General Meeting, succeeding Markus Kerber .

As an umbrella organization , the umbrella organization is responsible for the perception and promotion of all concerns of the branches of industry united under the umbrella of the BDI . However, this does not entitle him to represent socio-political issues . This function is reserved for the Federation of German Employers' Associations . The BDI statutes restrict the group of members to industrial umbrella organizations and working groups (Section 4 (2)). As a result, sole proprietorships or corporate networks cannot obtain membership. From a political science point of view, the BDI has been described as an interest group in the “economy and labor” sector and as “a top investor association of industrial sector and specialist associations”. As a representative of the interests of the industry, the umbrella association engages in articulation of interests following the process of internal opinion formation. The BDI carries out lobbying work around the world in the interests of industrial companies and is "heard in all economically relevant legislative processes". 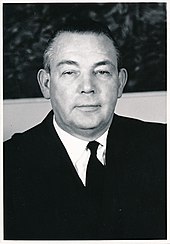 Helmut Schmidt at the 1974 BDI annual conference in Cologne

House of German Industry in Cologne (1993)

The origin of the BDI is the Reich Association of German Industry (RDI). This was founded on February 4, 1919 and was the leading association of industrial employers' associations during the Weimar Republic.

In 1949, the year the Federal Republic of Germany was founded, the German Federation of Trade Unions (DGB) was founded in Munich . The DGB only represents the interests of the employees. On October 19, 1949, just one week after the founding of the DGB, representatives of 32 business associations and working groups founded the committee for economic issues of the industrial associations. This designation took into account the concerns of the Allies about a permanent industrial umbrella organization. The Allies now considered top representation that represents the interests of the entrepreneurs to be necessary. On July 1, 1949, the representatives of the military government approved the statutes of such representation. At the beginning of 1950, the association was finally renamed to its current name.

Topics of the BDI

Konzerthaus on Gendarmenmarkt with banners for the TDI (2017)

The Presidium is at the head of the BDI. This is made up of

The president and the vice-presidents, together with the chairmen of the member associations, form the board. If matters of the federal association are not reserved for other organs by statutory provisions or the statutes, the executive board is responsible for these. The current president of the BDI is Dieter Kempf .

President of the BDI

In addition to the main location in Berlin, the BDI has other locations around the world and is therefore represented internationally. In Beijing , Washington, DC and Brussels , the aim of the BDI is to promote business contacts and to represent the interests of the German economy in the respective state.

The BDI currently has 40 members, including a working group consisting of 6 associations that share membership: