from Wikipedia, the free encyclopedia
This is the spotted version , flagged on May 1st, 2020 . There is 1 pending change that has yet to be viewed.

The Federal Association of German Employers' Associations e. V. ( BDA ) is the labor and socio-political umbrella organization for the entire German economy and has its seat in Berlin (from 1951 to 1999 in Cologne ). As an interest group for all branches of the private commercial economy in Germany, the BDA represents the employer side of around 70% of employees. 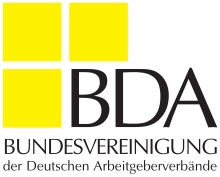 After the associations in the area of ​​the former French occupation zone had also joined at the end of 1949, the name “Federal Association of German Employers' Associations” was established in November 1950.

With the establishment of association structures based on the West German model in the new federal states in 1990, the BDA established itself as an all-German employers' association. In 1999 the BDA followed the government's move to Berlin and moved to the Spree. There it shares the Haus der Deutschen Wirtschaft at Breiten Straße 29 with the Federation of German Industry and the German Chamber of Commerce and Industry .

The BDA is a registered association according to § 21 BGB . As a professional association with the purpose of representing the interests of employers in our pluralistic society , it is committed to the common good and is therefore tax-exempt.

The most important organs are the general assembly, the board of directors, the presidium, the general management and the committees.

The general assembly, which takes place annually, elects the president for two years, the presidium and members of the board and is responsible for the budget and the fee schedule.

The board accepts new members, sets up committees and unanimously makes recommendations on collective bargaining policies . He determines the fundamental directional decisions.

The Presidium acts within the framework set by the Executive Board and is the central decision-making body. It consists of the president, eight vice-presidents including the treasurer and 42 other members and represents the entire spectrum of the German economy. According to Section 26 of the German Civil Code (BGB), the President and Vice-Presidents form the BDA's legal board .

There are also 75 committees and working groups that deal with technical issues, including four jointly with the Federation of German Industry . Your suggestions and opinions are the basis for the decisions of the Board of Directors and the Presidium.

At the European level, there is Businesseurope (formerly Union des Confédérations de l'Industrie et des Employeurs d'Europe ). Internationally, the BDA is represented in the International Organization of Employers .

At the head of the Confederation of German Employers' Associations is the President . This office has been held by the following people since 1949:

Another essential function in the BDA takes the chief executive one:

For its members, the BDA represents entrepreneurial interests in the formation of political will. It is opposed to the legislature, the executive, trade unions, social groups and the public. The BDA advises the decision-makers from the first draft bills in the ministry through parliamentary deliberations and committee meetings to the final treatment in the Federal Council. By creating concepts in her subject areas, she influences the formation of social will. In various committees, new positions are developed and information is processed. It is also represented in the self-governing bodies of all social insurance funds.

In addition, the BDA offers its members extensive information services. It provides information at an early stage about legal developments and evaluates political decisions made and labor law judgments, particularly with regard to their consequences for the company. To this end, it sends out 1,000 information circulars a year and processes 15,000 inquiries a year.

Resistance to the protection of whistleblowers

Roland Wolf, managing director and head of the labor law department of the BDA, spoke out against a proposed whistleblower protection law for Germany at a public hearing in the Bundestag on March 16, 2015.

In July 2015 the Federal Ministry of the Interior (BMI) issued a provisional distribution ban on the publication “Economy and Society” from the series “Topics and Materials” published by the Federal Agency for Civic Education (bpb). The ban took place on the initiative of the BDA and on the grounds of a violation of the Beutelsbach consensus . After reviewing the allegations, the scientific advisory board of the bpb came to the conclusion that the publication was unproblematic; The BDA had backed up its allegations with "shortening" and "falsifying" quotations with scandalous intent ; for example, materials were quoted directly without being identified. The board of directors of the German Society for Sociology criticized the measures taken by the Federal Ministry of the Interior and "refuses to oppose the Ministry's massive interference with the freedom of science" ; He further criticizes the "political advance of the BDA" , which ignores "the requirement of science-based education" . The IG Metall union also criticized the process as a "scandal" .