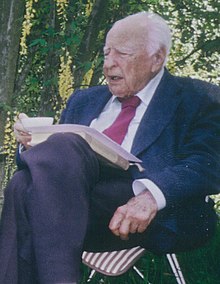 Hans-Georg Gadamer (born February 11, 1900 in Marburg , † March 13, 2002 in Heidelberg ) was a German philosopher . He became internationally known for his work, Truth and Method (1960), which is fundamental to philosophical hermeneutics . 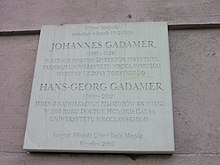 Hans-Georg Gadamer's grandfather Oskar Gadamer was an entrepreneur in Waldenburg-Dittersbach (Lower Silesia), his father Johannes Gadamer was a pharmacist and chemist . In 1902 Johannes Gadamer accepted an appointment as full professor of pharmaceutical chemistry at the University of Breslau and stayed there until 1919. His first marriage (1897–1904) was Johanna Gadamer nee Gewiese, daughter of the master mason and carpenter Hugo Gewiese and his wife Adele Becker. In 1904 Johanna Gadamer, the mother of Hans-Georg Gadamer and his brother, died. From 1905 Johannes Gadamer was married to Hedwig Gadamer geb. Hellich, daughter of the mining director Erich Hellich and his wife Ida Ehlert. His uncle was the district administrator Georg Gewiese .

Hans-Georg Gadamer grew up in Breslau and graduated from university there in 1918 . Gadamer then took up a degree in German, history, art history, philosophy and education at the universities of Breslau, Marburg and Munich and studied with Richard Hönigswald , among others . In 1919 he continued his studies at the University of Marburg. There he was in 1922 when Paul Natorp and Nicolai Hartmann with his doctoral thesis on The essence of pleasure to the Platonic dialogues to Dr. phil. PhD. 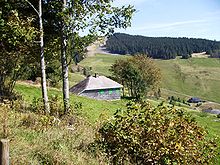 From 1923 Gadamer attended lectures by Edmund Husserl and Martin Heidegger at the Albert-Ludwigs-Universität Freiburg and during the summer in Heidegger's “hut” in Todtnauberg . For Gadamer, the encounter with Heidegger was “a complete shake of all too early self-confidence”. A year later, in 1924, Gadamer began studying classical philology with Paul Friedländer because he “had the feeling that he would simply be overwhelmed by the superiority of this thinker [Heidegger] if I didn't find my own ground on which I might be would stand more firmly than this mighty thinker himself ”. In 1927 Gadamer completed his state examination for higher teaching qualifications.

Habilitation at the University of Marburg

In 1929 Gadamer completed his habilitation with Heidegger and Friedländer in Marburg for philosophy and became a private lecturer at the University of Marburg. The title of his habilitation thesis is: Plato's Dialectical Ethics. Interpretations of the "Philebos" . Two years later his work Plato's Dialectical Ethics was published. After a stay in Paris in 1933, he published his work Plato and the Poets in 1934 , with which he achieved a breakthrough in the interpretation of Plato's Politeia . The writing shows the first, very clear beginnings of Gadamer's hermeneutics and proves his partly uncritical attitude towards National Socialism .

In August 1933 Gadamer became a member of the National Socialist teachers' association . On November 11, 1933, he signed the professors' commitment to Adolf Hitler and the National Socialist state at German universities and colleges . 1934/35 represented Gadamer at the University of Kiel the vacant Chair of Richard Kroner , who because of his Jewish descent of the teaching license had been suspended. In October 1935 Gadamer took part voluntarily in the lecturer camp of the NS-Dozentbund (NSDDB) in Weichselmünde near Danzig. As a result, he was awarded the title of non-civil servant extraordinary professor in Marburg in 1937 , which he had previously been refused, although he had already completed the usual six years of a private lectureship. Gadamer also received the replacement of the vacant chair from Erich Frank at the University of Marburg , whose license to teach was revoked because of his Jewish descent. Two years later, Gadamer was offered a professorship at the University of Leipzig , where he was appointed full professor and director of the Philosophical Institute at the University of Leipzig in 1938/39 as successor to Arnold Gehlen . The security service of the Reichsführer SS classified Gadamer in the ideological assessment within the “SD dossiers on philosophy professors” from the SS point of view as “indifferent” in his attitude to National Socialism. During the time of the Second World War , Gadamer worked on the Nazi project “ War Deployment of the Humanities ”. Gadamer was involved in National Socialism, but avoided exposing himself too much during the Nazi era .

After the war, Hans-Georg Gadamer became dean of the Philosophical Faculty in 1945 and later rector of Leipzig University until 1947. After hopes for a democratic development in the Soviet zone of occupation had been dashed, Gadamer actively sought a position in the western zone. On August 14, 1947, he announced his resignation from the rector's office on October 1, and on that day he received a position at the University of Frankfurt am Main , initially on a substitute basis, from July 1, 1948 as a full professor, after returning to Leipzig for He was arrested on denunciation and interrogated by a Russian officer, but released. In 1949 he was appointed to Heidelberg University as the successor to Karl Jaspers .

Gadamer founded the Philosophische Rundschau with Helmut Kuhn in 1953 . In the same year Karl Löwith , who had emigrated from Germany in 1934 because of his Jewish origins, returned through Gadamer's mediation and accepted a call from Heidelberg University. In 1951 Gadamer became a member of the Heidelberg Academy of Sciences . In 1960, " Truth and Method " was published, and in 1962 Gadamer became President of the General Society for Philosophy in Germany . An application for the rectorate of the University of Heidelberg, however, failed. This was followed by the establishment of the International Association for the Promotion of Hegel Studies , of which he became President. In 1966, as President of the General Society for Philosophy in Heidelberg, he organized a congress on language.

From 1967 to 1971 Gadamer and Habermas debated , until 1977 he wrote little writings in four volumes . In 1968 he retired in Heidelberg, but continued to teach. From 1969 to 1972 he was President of the Heidelberg Academy of Sciences . In 1971 he was awarded the Order Pour le Mérite , received the Reuchlin Prize of the City of Pforzheim and the Great Federal Cross of Merit . In the 1980s and 1990s he taught regularly at the Istituto Italiano per gli Studi Filosofici in Naples.

Hans-Georg Gadamer 1995: Handwritten thanks for congratulating your 95th birthday.

Hans-Georg Gadamer was one of the most prominent German philosophers of the 20th century. He is regarded as the founder of a universal hermeneutics , which developed in the successor to Heidegger from the criticism of the methodology of traditional hermeneutics by Friedrich Schleiermacher and Wilhelm Dilthey .

For Gadamer, any understanding , regardless of whether it is about texts, works of art and buildings or the other person in a conversation, is bound to the linguistic quality of being in front of the horizon of time. When interpreting works, this presupposes openness, the awareness of one's own prejudice structure and the willingness to talk or to reflect on it. He was less concerned with working out a method of hermeneutics than with describing how understanding “always happens” (WM II 394). For Gadamer, understanding is not just one type of knowledge, but universal. Here he ties in with Heidegger, who writes about the subject (“Dasein”) that it is in the world only in the way “that it has ever understood or not understood”. (SZ 144) The being of the human being is to understand oneself orientated in the world. Gadamer explicitly builds on this and tries to explain the consequences for the humanities (WM I, 269). His criticism of the humanities' self-image is therefore that all methodology is always preceded by an unmistakable understanding. The trust in the method only covers over the irreversible prejudice structure to which the human being remains bound in his historicity.

Classification in the humanities currents

Neo-Kantianism and the phenomenology of the mind

At first Gadamer belonged to the environment of the Marburg Neo-Kantianism of the late 19th century, which was predominantly oriented towards the mathematical sciences and their methods and focused on the "way of knowing" objects. The work of Paul Natorp and Nicolai Hartmann was also initially committed to this approach. The critique of their methodological basic position - of "problem-historical" historicism - was the starting point for Gadamer's detachment from neo-Kantianism. Then he turned to the phenomenology of Husserl (1859-1938), which also shaped his habilitation thesis. At this time he met Heidegger, from whose existential philosophy he adopted many elements. According to his own statements, in it he found the counterforce he was looking for to Plato .

He formulated his positions in his major work, Truth and Method, from 1960. Gadamer understands hermeneutics not only as an art theory, but considers understanding to be one of the foundations of human life. In the debate with Habermas and Karl-Otto Apel , there was a shift in emphasis. The main exponent of philosophical deconstruction , Jacques Derrida, also criticized his hermeneutics. Several features in Gadamer's thinking earned him the reputation of a liberal conservative. His work is permeated by a technology skepticism based on Heidegger.

In his work, created against the background of the collapse of Neo-Kantianism after the First World War , he tries to answer the question of what constitutes philosophy in view of the dominance of the natural sciences.

Hans-Georg Gadamer received numerous honors and awards in the course of his life. These included: