Security service of the Reichsführer SS 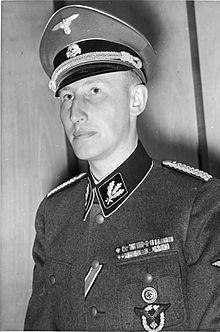 The security service of the Reichsführer SS (abbreviation SD ) was part of the power apparatus during the time of National Socialism in the German Reich and during the war in occupied Europe. It was founded in 1931 as the secret service of the NSDAP and its associated SS , and from 1939 was subordinate to the Reich Security Main Office (RSHA). He was used specifically to combat and destroy political opponents and intimidate the population and was responsible for numerous crimes in the original Reich territory and the areas occupied by the Wehrmacht . Due to his international division, he also dealt with espionage and covert operations .

SD men during an action to arrest Jews in Poland (September 1939). The driver (an SS Rottenführer) still wears the “shoulder strings” of the General SS

The SD was created on October 5, 1931 by Reichsführer SS Heinrich Himmler as the secret service of the SS and placed under Reinhard Heydrich . Initially called "Ic-Dienst", Heydrich changed its name to "PI-Dienst" (press and information service) during the ban on the SA and SS from April to June 1932, before the department was finally named "Security Service". The SD was financially fed until the end of its existence from the budget of the Reich Treasurer of the NSDAP, Franz Xaver Schwarz .

After the seizure of power by the Nazis in January 1933, the headquarters of the SD from Munich to Berlin was moved. His duties included both monitoring political opponents and party members. The SD competed with the Secret State Police, which were also subordinate to Himmler and Heydrich .

After the alleged Röhm putsch in the summer of 1934, the responsibilities of the two organizations were more precisely defined. According to this, as an espionage and counter- espionage service , the SD was to support the Gestapo in exposing enemies of the state.

In a lecture to officers of the Wehrmacht in January 1937, Himmler summarized the intelligence tasks of the SD as follows: “The areas that he [the SD] is working on are primarily communism , the activities of politicizing denominations and reaction. Here too, however, the individual questions of the executive are not of interest. [...] The security service is only interested in the big ideological questions. "

In an order dated December 14, 1938, Hess confirmed the monopoly of the intelligence service: “As a result of my order of June 9, 1934, the security service of the Reichsführer SS was set up as the only political intelligence and defense service of the NSDAP, its branches and affiliated associations. The SD-RF-SS is therefore an institution of the party. The organizational and human bearer of this facility is the SS as a division of the party. "

In 1935 there was a subdivision into the "General SD", which was then occupied by members of the Security Police (Sipo), and the more important "Nachrichten-SD", which carried out surveillance of the population. The results were summarized in the so-called “Leithefte” and later in the reports from the Reich . For this purpose, the SD had 52 SD (control) sections with 51 main and 519 branch offices available (for a list, see SD upper section ). In 1944, 6,482 full-time SD members and over 30,000 V- men worked there .

In autumn 1938 the SD was finally elevated to a state institution. A decree of the Reich Ministry of the Interior of November 11, 1938 stated: “The security service of the RFSS has to fulfill important tasks as a news organization for party and state - especially to support the security police. The SD is thus active on behalf of the state. This requires close and understanding cooperation between the SD and the administrative authorities of the general and internal administration. "

On October 1, 1939, the Main Office of the Security Police and the SD Main Office were merged to form the Reich Security Main Office (RSHA). At the beginning of the real union with the security police, the tasks of the SD within the RSHA were divided into a total of four offices. The SD also provided the respective heads of these sub-areas: 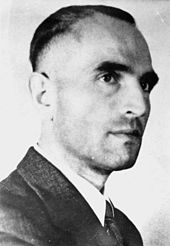 In a first change in the organizational structure, Office I was divided into two offices. From then on , Office I, under the direction of Bruno Linienbach, took care of personnel matters, while the newly formed Office II under Best was responsible for organization, administration and law. The previous Office II became the new Office VII "Weltanschauung research and evaluation" headed by Franz Six.

The SD also competed with state organizations in international espionage, in particular the Foreign Office / Defense of the High Command of the Wehrmacht . As a result of the assassination attempt on July 20, 1944 , the SD was also able to gain control of this institution. The Auslands-SD maintained its own agent networks abroad, z. B. in the Vatican , and supported foreign fascist organizations. Above all in the areas inhabited by Germans in Poland and Czechoslovakia , but also in other parts of Central Eastern Europe, the foreign SD organized terrorist groups among the German minorities, which, as so-called fifth columns, prepared the German occupation. The Auslands-SD was also in charge of the preparation and implementation of the attack on the Gleiwitz transmitter on August 31, 1939, which served as a propaganda pretext for the attack on Poland .

The SD had its seat in the Prinz-Albrecht-Palais at Wilhelmstrasse 102 in Berlin . The site is now part of the Topography of Terror memorial .

SS Einsatzgruppen and persecution of Jews

The SD played a key role in setting up and equipping the SS Einsatzgruppen . The decisive factor was the conviction that the Jews were "natural" enemies of the state and the NSDAP. This attitude was already expressed in December 1936 in a memorandum of the "Department Jews" (Department II 112), in which the "preliminary goal [...] the liberation of Germany from the Jews" was announced.

The first operations of the Einsatzgruppen took place during the annexation of Austria in March 1938 and in the course of the invasion of German troops of the Wehrmacht into the Sudetenland in October 1938. An undated draft of the SD main office from that time specifies the tasks and role of the SD: “The SD follows, if possible, immediately behind the invading troops and, analogous to his tasks in the empire, assumes the security of political life. Measures in the Reich are under the direction of the Gestapo. SD is involved. Measures in the occupied area are under the direction of a senior SD leader. " 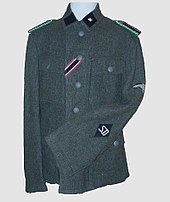 Field blouse (model 1943) of a Unterscharführer of the Security Service (SD) of the SS with the SD sleeve diamond. In addition, the police shoulder pieces, which have been in compliance with regulations since 1942, here a constable of the security police

Before the attack on Poland in September 1939, Einsatzgruppen were also deployed to “fight all anti-Reich and anti-German elements behind the fencing troops”. A total of six groups were ready when the war broke out. Initially, five Einsatzgruppen were set up to follow the five armies of the Wehrmacht. However, a sixth group was subsequently formed, whose area of ​​operation was to be the " Province of Posen ". Each of the task forces consisted of two to four "task forces" of 120 to 150 men each. From September 12, 1939, the total strength of all Einsatzgruppen was around 2,700 men. The task forces consisted mainly of personnel from the regional SS offices of the original "assembly points", namely Vienna , Opole , Breslau , Dramburg , Allenburg and Frankfurt an der Oder . The respective heads of the Einsatzgruppen and the Einsatzkommandos, on the other hand, came mainly from SD personnel. At the beginning of their deployment in Poland, the Einsatzgruppen were officially called “Einsatzgruppen der Sicherheitspolizei” and wore the field uniform of the SS disposable troops with the SD diamond on their left sleeve.

Reinhard Heydrich summarized these first operations of the Einsatztruppen under the leadership of the SD in a memorandum of July 2, 1940 as follows: “In all previous operations: Ostmark, Sudetenland, Bohemia and Moravia and Poland, special police Einsatzgruppen were included according to the Führer’s special order the advancing, in Poland proceeded with the fighting troops and, due to the prepared work, had systematically through arrest, confiscation and seizure of the most important political material violent blows against the elements hostile to the Reich in the world from the camp of emigration , Freemasonry , Judaism and political-church opponents as well as the 2nd and 3rd International. "

In the course of the operations during the attack on Poland, the first mass shootings of Polish civilians and officials by the Einsatzgruppen took place. According to Heydrich, these liquidations led to "friction" with several commanders of the Wehrmacht due to their "ignorance" of the "instructions of the Führer" and the "ideological enemy situation".

SS-Standartenführer Josef Meisinger , the "butcher of Warsaw", worked from April 1, 1941 to May 1945 as a police liaison leader and special representative of the Reichsführer SS security service at the German embassy in Tokyo . Meisinger wanted to convince the Japanese that someone who was an anti-Nazi must also be an anti-Japanese. Most of these anti-Nazis fled Germany to Japan or Shanghai. He wanted the Japanese from the solution of the Jewish question in Asia , i. H. convince of the necessity to make Shanghai “free of Jews” . In 1941, he intervened with the Japanese authorities and asked them to murder the approximately 18,000 Jewish refugees from Austria and Germany in the Shanghai ghetto . However, the Japanese did not meet this demand.

Until 1942 the SD was led by Reinhard Heydrich. After Heydrich died on June 4, 1942 as a result of his injuries in an assassination attempt in Prague , Ernst Kaltenbrunner took over the management until 1945.

The SD was convicted as a criminal organization alongside the SS and the Gestapo as part of the Nuremberg Trials .

Numerous members of the SD were after 1945 under the leadership of former Major General of the Armed Forces Department Foreign Armies East , Reinhard Gehlen , in Western intelligence agencies over - first in the " Gehlen Organization ," the 1956 founded the new Federal Intelligence Service of the Federal Republic of Germany came up.

Head of the security service of the Reichsführer SS

The rank designations of the SD corresponded to those of the SS disposable troops and the Waffen SS. SD members who were also employees of the security police (Kripo or Gestapo) also kept their ranks (see rank adjustment ). The SD adopted the field uniform of the Waffen SS, with the following differences: