Ernst Kaltenbrunner (born October 4, 1903 in Ried im Innkreis , Upper Austria ; † October 16, 1946 in Nuremberg ) was an Austrian National Socialist, a high-ranking SS functionary both in Austria and later in the National Socialist German Reich and head of the from 1943 until the end of the war Security Police and SD as well as head of the Reich Security Main Office (RSHA).

Kaltenbrunner was among the 24 in the Nuremberg Trial of the Major War Criminals before the International Military Tribunal accused persons, was discussed on 1 October 1946 in two of three counts of guilty to death by the strand convicted and executed on October 16, 1946th

Ernst Kaltenbrunner was born as the son of the lawyer Hugo Kaltenbrunner and his wife Therese. He spent his youth and elementary school time in Raab and after moving to the Bundesrealgymnasium in Linz , where he met his later subordinate Adolf Eichmann at school. Even Adolf Hitler , however, attended this school, in another class. After graduating from high school in 1921 , Kaltenbrunner began studying chemistry at the Graz University of Technology , but soon switched to law and was awarded a Dr. iur. PhD . During his studies in 1921 he became a member of the Arminia Graz fraternity , whose age he was until his death.

After completing his studies , he completed his legal clerkship and was employed by a well-known law firm in Linz until the summer of 1929 . Kaltenbrunner did not fit into a bourgeois life, but worked in paramilitary groups such as the Austrian homeland security . From summer 1929 he worked full-time for homeland security. However, since they pursued Kaltenbrunner's main political goal, the annexation of Austria to the German Reich , with an intensity that he found insufficient, he switched to the NSDAP in October 1930 ( membership number 300.179) and joined the SS on August 31, 1931 (SS number 13.039 ) at. From 1932 he worked in his father's law firm. He became legal advisor to SS Section VIII (Linz) and made a name for himself as a defender of imprisoned party members. He also acted as Heinrich Himmler's newsman during the time before Austria was annexed to the German Empire . Kaltenbrunner provided the Reichsführer SS with information on the political situation in Austria. In 1934 he married Elisabeth Eder .

After the NSDAP ban in Austria in June 1933, Kaltenbrunner continued to work illegally for the party. After the failed July coup in 1934, he was imprisoned for a few months in the Kaisersteinbruch detention camp , then sentenced to ten months' imprisonment for high treason . After his release from prison he was Anton Reinthaller's secretary . In 1935 Kaltenbrunner became the leader of SS Section VIII (Linz), which still existed in secret.

In the wake of the Austrian National Socialist functionary Arthur Seyß-Inquart , he quickly rose to the ranks of the Austrian party wing. Seyss-Inquart propagated a policy of the silent dissolution of the state. This stood in stark contrast to the brutal frontal methods of the rest of the Nazi leadership in Austria, which in Hitler's eyes damaged the party's reputation abroad. In the course of the Anschluss , in March 1938, Kaltenbrunner was appointed "State Secretary for Security in Austria" and leader of the SS Upper Section Danube (initially in Linz, later in Vienna ). At the same time he became a member of the German Reichstag .

“As leader of the SS in Austria, Kaltenbrunner was involved in the Nazi intrigue against the Schuschnigg government. On the night of March 11, 1938, after Goering had ordered the Austrian National Socialists to usurp control of the Austrian government, 500 Austrian SS men led by Kaltenbrunner surrounded the Federal Chancellery and a special unit under the command of his adjutant , penetrated the Federal Chancellery while Seyß-Inquart was negotiating with President Miklas "

On September 11, 1938 Heinrich Himmler made him Higher SS and Police Leader Danube, also in Vienna, and subordinated the entire SS and police in the incorporated Austrian areas to him. Here Kaltenbrunner felt, despite his rank as SS-Gruppenführer , sidelined, because he often felt ignored in his competencies by the envious leadership of the SS around Obergruppenführer Reinhard Heydrich . On June 20, 1940, Kaltenbrunner succeeded the late SS-Oberführer Otto Steinhäusl as police chief of Vienna. The real work was done by his deputy Leo Gotzmann , who officially succeeded him in office on January 6, 1941.

On January 30, 1943, Kaltenbrunner was introduced to his new post as chief of the security police and the SD in Berlin . Kaltenbrunner hereby became the successor of Himmler, who has been Heydrich's death after an assassination attempt in Prague the line of June 4, 1942 at the Reich Security Main Office (RSHA) in addition to its other functions provisionally had perceived. In June 1943, Kaltenbrunner was promoted to SS-Obergruppenführer and general of the police . As head of the RSHA, he was the head of the notorious Gestapo Office , the Reich Criminal Police Office and the Security Service (SD) , which was responsible for the task forces that murdered around 1,000,000 people in the rear of the Eastern Front by the end of the war . He was also President of Interpol (IKPK) as Heydrich's successor.

“As head of the RSHA, Kaltenbrunner had the authority to order protective custody in concentration camps and release from concentration camps. Orders of this kind were usually issued with his signature. ... Kaltenbrunner himself ordered the execution of prisoners ... At the end of the war Kaltenbrunner was ... ... involved in the extermination of a large number of them with the intention of preventing them from being freed by the Allied armies. …… During the period when Kaltenbrunner was head of the RSHA, it pursued a far-reaching program of war crimes and crimes against humanity. ... ... The RSHA played a leading role in the ' final solution ' of the Jewish problem by exterminating the Jews ”

Ernst Kaltenbrunner as a spectator in the People's Court (1944)

After the failed assassination attempt on July 20, 1944 , he was the first SS man to appear in the Bendler Block and ensured that the killing of the conspirators, which was carried out on the orders of Friedrich Fromm , was immediately stopped. He and the RSHA were then given the task of arresting and interrogating the conspirators. As head of the Reich Security Main Office, he also heard other suspects and witnesses (such as the Berlin surgeon Ferdinand Sauerbruch ).

On March 12, 1945, Kaltenbrunner promised the then ICRC president Carl Burckhardt that ICRC delegates would be granted access to the concentration camps. However, this was subject to the condition that these delegates remained in the camps until the end of the war. Ten delegates, among them Louis Häfliger ( Mauthausen ), Paul Dunant ( Theresienstadt ) and Victor Maurer ( Dachau ) declared themselves ready for such a mission.

Towards the end of the war, Kaltenbrunner holed up with a few last loyal followers in the so-called Alpine fortress near Altaussee , where resistance was to be offered until the bitter end and where many prominent National Socialists had brought stolen treasures in order to prepare for the time after the war . On May 7, 1945, Kaltenbrunner and his adjutant Arthur Scheidler fled to the Wildenseehütte with the help of two Altaussee hunters . One of the hunters revealed Kaltenbrunner's hiding place to the Americans who were advancing in Ausseerland on May 8, 1945 . On May 12, 1945, a group of infantrymen from the CIC , led by Robert Matteson and led by men from Aussee, went to the Wildenseehütte in the Dead Mountains , where they arrested Kaltenbrunner and Scheidler. Both had false papers that identified them as doctors. But remains of ID cards and Kaltenbrunner's identification tag were found in the ash drawer of the wood heating system. 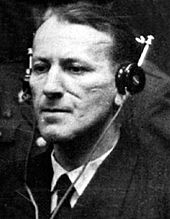 Kaltenbrunner during the Nuremberg Trial

After his arrest, Kaltenbrunner was first brought to England for questioning and then to Nuremberg , where he was to be brought before the International Military Tribunal (IMT) . There he spoke of mistreatment in English custody and looked like a broken man. When the indictment was presented to him (he was charged with crimes against humanity and war crimes), he began to cry. After a short time, however, Kaltenbrunner turned into a man who fought for his life by all means.

As part of the trial, the American forensic psychologist Gustave M. Gilbert observed and examined the defendants in their cells and, after the indictment was presented, asked them to write their thoughts in the margin as notes. This should best reflect their character. Kaltenbrunner's note, who was indicted in points 1, 3 and 4, i.e. conspiracy, crimes against humanity and general war crimes ( deportation , murder and mistreatment , looting ), read:

"I do not feel guilty of any war crimes, I have only done my duty as a security organ and refuse to serve as a substitute for Himmler."

After an illness, Kaltenbrunner took his seat in the dock three days after the other defendants. He was considered by his co-defendants, along with Joachim von Ribbentrop and Julius Streicher, to be one of the least popular, with whom no one wanted to have anything to do with. Kaltenbrunner's defense strategy was essentially to deny any involvement in crimes and to claim to have nothing to do with executive offices like the Gestapo . He was more of a kind of intelligence officer with exclusively representative tasks. If necessary, he even denied his own signature on incriminating documents that were held before him by his accuser. The International Military Tribunal at Nuremberg sentenced Kaltenbrunner in his proclaimed on September 30 and October 1, 1946 verdict to death by the strand . The sentence was carried out on October 16, 1946 at 1:15 a.m. in the Nuremberg judicial prison . The body was cremated a day later in the municipal crematorium in Munich's Ostfriedhof and the ashes were scattered in the Wenzbach , a tributary of the Isar .

Head of the Vienna Police Department