from Wikipedia, the free encyclopedia
This is the spotted version , flagged on November 25, 2019 . There is 1 pending change that has yet to be viewed.

The Deutsche Verlags-Anstalt ( DVA ) is a German book publisher based in Munich . It goes back to the Hallberger publishing house founded in Stuttgart in 1831 . Later owned by Robert Bosch and the Fazit-Stiftung , Deutsche Verlags-Anstalt has been part of the Random House publishing group since 2005 . The most successful title is Maya the Bee and Her Adventures by Waldemar Bonsels . In addition, the Deutsche Verlags-Anstalt became known through numerous political biographies. Today the program includes sophisticated fiction , poetry and non-fiction books as well as works from the fields of architecture, garden and living.

In 1831 Ludwig Hallberger founded the Hallberger publishing company in Stuttgart . He was one of the first publishers to rely on well-known regular authors, which was crucial for the further development of his company. In 1848 his son Eduard Hallberger founded his own publishing house, whose program was shaped by the German Revolution of 1848/1849 . Eduard Hallberger also entered the young market for magazines . In 1873 both publishers were united and moved into a joint publishing house. At that time, the publisher was already one of the most important players in the industry. After Ludwig and Eduard Hallberger died, the company was converted into a stock corporation in 1881 under the name "Deutsche Verlags-Anstalt" . The management of the company took over Karl Berger Hall, brother of Edward. At that time, the printing, bookbinding, paper and cellulose factories of the Deutsche Verlags-Anstalt also played a major role in the business. Half of the shares in Deutsche Verlags-Anstalt were owned by Ludwig and Eduard Hallberger's heirs, the other half were held by three banks.

After the end of the Second World War , the Deutsche Verlags-Anstalt received a printing license from the military government in 1945. Due to the extensive backlist , the company developed into one of the largest German publishers again over the next few years. The program also took poetry play an important role. In 1950 the shares in the Deutsche Verlags-Anstalt were returned to the heirs of Robert Bosch. In the post-war years, the company's headquarters were provisionally located in Mörikestrasse, before it returned to its headquarters in Neckarstrasse in 1958. They bought the Engelhorn Verlag , which in the field of popular fiction was very successful. In addition, the Deutsche Verlags-Anstalt participated as a founding partner in the German paperback publishing house . The range of magazines was expanded again, including the first issue of Bild der Wissenschaft appeared in 1964 .

The Bertelsmann - subsidiary thus strengthened its position in the German market. This has been criticized by observers and other publishers. Nevertheless, the Federal Cartel Office approved the takeover. Even after the sale, the Deutsche Verlags-Anstalt remained an independent publisher under the umbrella of the publishing group. 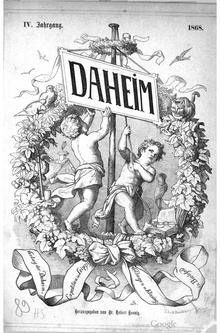 Ludwig Hallberger published novels by Carl Spindler and travel reports by Hermann von Pückler-Muskau . His work Allusions about landscape gardening was the first architecture book of the Deutsche Verlags-Anstalt and was available until the 1990s. With Nikolaus Lenau , a prominent author switched from Klett-Cotta to Ludwig Hallberger. The first publication of his son Eduard were Wehrmanns Lieder , the title was intended to benefit the German Revolution of 1848/1849 . An important product of Eduard Hallberger were magazines and magazines such as Gartenlaube , Daheim , Illustrierte Welt and Über Land und Meer . After the merger of the two family businesses, the publishing house published works by Otto Julius Bierbaum , Ricarda Huch and Theodor Fontane as well as translations by the authors August Strindberg , Lev Nikolajewitsch Tolstoy , Iwan Sergejewitsch Turgenew , Mark Twain and Émile Zola .

Under Gustav Kilpper, the authors Max Bense , Karen Blixen , Maurice Maeterlinck and others came to the Deutsche Verlags-Anstalt. In the 1920s, the program was expanded through acquisitions by Waldemar Bonsels , Börries von Münchhausen , Ina Seidel and Clara Viebig . German authors, including Heinrich Lersch , Gottfried Benn and Erich Kästner , gained in importance. In 1923 Thomas Mann published the confessions of the impostor Felix Krull in the Deutsche Verlags-Anstalt. It was a leader in the field of biographies and memoirs of politicians such as Otto von Bismarck . “Die Literatur” developed into an important journal for literary criticism and literary communication , but it made permanent losses.