Jens giving a speech at the Academy of Arts (2005)

Walter Jens (born March 8, 1923 in Hamburg ; † June 9, 2013 in Tübingen ) was a German classical philologist , literary historian , writer , critic and translator . He was full professor for rhetoric at the Eberhard Karls University in Tübingen , president of the PEN Center Germany and president of the Berlin Academy of the Arts . 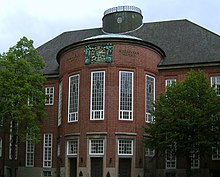 Scholars' School of the Johanneum in Hamburg (2006)

Walter Jens was the son of a bank director and a teacher. From 1929 he attended the co-educational elementary school at Breitenfelder Straße 35 in Hamburg-Eppendorf , half of his classmates were of Jewish faith . From 1933 until his Abitur in 1941 he was a student at the Hamburg School of Academics at the Johanneum . From 1941 to 1945 Jens studied German and Classical Philology - first in his hometown Hamburg, from April 1943 in Freiburg im Breisgau . His academic teachers included Bruno Snell and Martin Heidegger . Because of his severe suffering from asthma , he was not called up for military service in the Wehrmacht . During the time of National Socialism , Jens was a member of the Hitler Youth and the NS student union . Since September 1, 1942, he was listed as a member of the NSDAP .

He has been passionate about football since his youth . He attended games of the Eimsbütteler TV , a Hamburg district club. Later he was a goalkeeper in a Freiburg student team.

“What should become of an asthmatic who had to spend a full quarter of his school days in sanatoriums (and did it with joy: Children's sanatorium, Sister Frieda Klimsch Foundation, Königsfeld in the Black Forest in Baden - a refuge where I was safe)? How could someone have survived who was lost for the heroic times because he needed bronchovydrin and alludrin in high doses in order to exist at all - and who at the same time was grateful for his illness because it saved him from marching and he never had one in his life Had to pick up a weapon? " 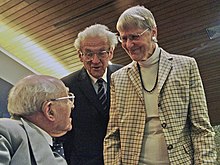 On December 8, 1944, Jens received his doctorate at the University of Freiburg under Karl Büchner with a thesis on the Sophoclean tragedy "in an abbreviated process". The rigorosum took place in an air raid shelter. From 1945 to 1949 he worked as a research assistant in Hamburg and Tübingen. His first literary text The White Handkerchief appeared in 1947 under the pseudonym Walter Freiburger. Jens completed his habilitation in 1949 at the age of 26 with the non-printed font Tacitus und die Freiheit at the Eberhard Karls University of Tübingen . From 1950 he belonged to " Group 47 "; this year he made his breakthrough with the novel no. The world of the accused . The publisher Ernst Rowohlt had hired him in 1948 to write a novel.

"Your little, big Walter." Handwritten dedication by Walter Jens, in: Walter Jens: No. The world of the accused . Hamburg 1950.

“The conditions were good. 300 Reichsmarks a month, plus, that was the most important thing, 1000 sheets of wood-containing gray paper. I went to work, made notes, sketched the scheme of the composition and wrote the book, in May 1949, in three whole weeks: 16 pages per night, in pencil on Rowohlt's pieces of wood; more time was not available to the post-doctoral candidate Jens. "

With this novel, Jens protested against a utopian model of totalitarian power. The main character is Walter Sturm, a former lecturer and writer who loves Franz Kafka's work more than anything else. The supreme judge and ruler of the state explains to him that "in the whole world there are only defendants and witnesses and judges." The novel was created under the impression of National Socialism and Stalinism . The critics were enthusiastic, the book was dramatized in France by Émile Favre and in this version received the Amis de la liberté award . In 1951 Walter Jens married the literary scholar Inge Puttfarcken . The couple had two sons, the journalist Tilman Jens (1954-2020) and the television editor Christoph Jens (* 1965).

As a classical philologist, Jens sought to demonstrate the importance of the ancient myths of gods and the New Testament story of God for current questions about truth and peace through translations of Greek literature and the Bible. In 1956, Walter Jens was appointed as an adjunct professor for classical philology at the University of Tübingen. In his story The Testament of Odysseus (1957) he reinterpreted the ancient figure. Odysseus becomes an antihero who gives his grandson Prasidas a life story. He is not the brave adventurer, but a pacifist who hates the carnage and wants to prevent the Trojan War by all means. But he fails.

“It was a picture of horror, Prasidas. The city was still burning. Looting parties combed the houses - for three days they were allowed to do what they wanted; children lay open-mouthed in the street, balls, blocks and dolls still in their arms; the screams of the wounded came from half-smashed houses [...] "

Jens opened the Frankfurt Book Fair in 1961 with the speech Plea for the positive in modern literature . In 1962 he became a full member of the German Academy for Language and Poetry . In the fictional correspondence Herr Meister. Dialogue about a novel , Jens examined the possibility of poetic production: the protagonists, a literary scholar and a poet, discuss a failed novel project. From 1963 to 1988 Jens held the nationwide first chair for general rhetoric at the Eberhard Karls University in Tübingen , which had been set up especially for him - the first of its kind in Germany since 1829. He was also director of the seminar for general rhetoric. His students included Wilfried Barner and Gert Ueding , who succeeded Jens' chair.

Under the pseudonym Momos , Jens has been writing television reviews for the weekly newspaper Die Zeit almost every week since 1963 . Since 1965 he was a member of the Free Academy of the Arts Hamburg . In group 47 he became a feared critic at the lectures. In 1966, Martin Walser wrote a satirical description of how he handled the texts in his letter to a very young author :

"[...] but above all he will throw what you have read into the air over and over again and let a squadron of violently booming nouns followed in the air by a squadron of nouns that are trained in association flight [...] So you will be amazed and moved to watch that I already know when he deals with you with stormy accuracy; you will think of Kinski or Demosthenes [...] "

In 1971 Jens was appointed to the founding senate of the University of Bremen . He saw himself as a “writer and Protestant”. He was President of the PEN Center of the Federal Republic of Germany from 1976 to 1982 and again after the death of Martin Gregor-Dellin from 1988 to 1989. From 1989 to 1997 he was President of the Akademie der Künste zu Berlin, where he successfully merged with the Ostakademie . Then he was their honorary president. From 1990 to 1995 he was also chairman of the Martin Niemöller Foundation .

In his last novel, Der Fall Judas , Jens dealt with a fictional beatification process for Judas Iscariot in the form of a forensic case study in 1975 : “Without Judas there is no cross, without the cross there is no fulfillment of the plan of salvation. No church without this man; no tradition without the narrator. ”He translated parts of the New Testament : the four Gospels , the Epistle of Paul to the Romans, and the Revelation of John . He had a long-standing friendship with Hans Küng , as well as with Ralph Giordano , whom he already knew from his school days in Hamburg, and - with interruptions - with Marcel Reich-Ranicki . Jens was a member of the Evangelical Church.

From the beginning of the 1980s he became involved in the resistance of the peace movement against the NATO double resolution and the stationing of Pershing missiles. With Heinrich Böll and other well-known writers and theologians , he took part in the “celebrity blockade” in front of the Pershing depot in Mutlangen at the beginning of September 1983 . During the Second Gulf War, his wife hid and he deserted US soldiers in her home. Jens was a member of the advisory board of the Humanist Union . Between January 1989 and April 2011 he was co-editor of the monthly magazine Blätter for German and international politics .

In 2003, the statement in the Germanists ' dictionary that Jens was a member of the NSDAP caused a scandal. Because at first Jens publicly denied membership. On December 6, 2003, Der Spiegel reported the existence of two membership cards from the NSDAP card index with his name. Thereupon Jens said in an interview with the Süddeutsche Zeitung "with great certainty" that he was not a member of the NSDAP and that he could not remember ever having submitted a membership application. At most it could be that he unknowingly told the untruth. In a conversation with his son Tilman for the ZDF culture magazine aspekte on December 12, 2003, Jens admitted his own mistakes in his relationship to National Socialism. Referring to a speech about “degenerate literature” that he had given in Hamburg in 1942 as a 19-year-old member of the NS student union, he regretted that after the war he had not “emphasized his own errors more decisively, differentiated and emphatically”.

Grave in the Tübingen city cemetery

In the 1980s, Jens suffered from depression. He was treated by Hans Heimann , a professor of psychiatry in Tübingen. 15 years later, Jens and his wife Inge publicly confessed to the disease on the ARD talk show Boulevard Bio on May 15, 2001. On August 3, 2001, he and his wife gave an interview to the journal Psychotherapie im Dialog .

In 2004 Walter Jens suffered from dementia . His son Tilman made the disease public in the feature section of the FAZ and triggered a debate in the German-language media. As a result, Tilman Jens published the books Dementia: Farewell to my father and parricide: Against a general suspicion . Inge Jens, the wife of Walter Jens, also published the experiences with her husband suffering from dementia. Walter Jens died at the age of 90 on June 9, 2013 in Tübingen. He was buried in the local city ​​cemetery (grave no. O VIII 11/12).

“Would it really be a gain ..., a gain for man, if he were immortal instead of - how soon! - to pass and suddenly have to go? Would it be an asset for him: not to be in time, but immortal like - maybe - a stone or a distant star? Isn't it precisely in transitoriness, and above all, in the knowledge of it, that its distinctive unparalleled power? "