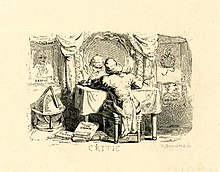 Under criticism refers to the judgment of a subject or an action based on standards. As the philosopher Anne-Barb Hertkorn has pointed out, criticism is "a basic function of thinking reason and, if it is applied to one's own thinking , becomes an essential feature of the formation of judgments that claim to be valid ." () It applies in the sense of an art of Judgment as one of the most important human skills.

Besides the importance of the test assessment and their expression in appropriate words denoting criticism - especially in the verb criticize as well as complain and Monierung - a complaint or quirk . In earlier socialist states, according to the Duden, also "[public] critical commentary on errors and omissions as a means for political and social development".

The word "criticism" was adopted from French at the end of the 17th century . The French word critique, on the other hand, goes back to the Greek κριτική [τέχνη] ( kritikē [téchnē] , derived from κρίνειν krínein '[differentiate], separate').

Criticism is distinguished from:

In German, the term “criticism” first appeared at the end of the 17th century, where it was initially used in literary theory based on the French and the underlying ancient Greek usage . Inspired by thinkers such as Pierre Bayle ( Dictionnaire historique et critique , 1695–1697), rule poetics such as Johann Christoph Gottsched's attempt at critical poetry (1730) emerged in German-speaking countries . The term “literary criticism” in this context did not so much refer to the review of individual literary works, but rather to the literary theoretical discourse that Gottsched tried to use to normatively enforce his rule-poetical ideas as the basis of a theoretical and aesthetic value of literature.

Lessing thought little of rule poetics and in the 18th century developed the concept of discursive literary criticism, the starting point of which is the reader's personal examination of the text. This concept has been expanded and differentiated many times, but is still relevant today.

In addition to the literary criticism of criticism have arisen until today many other forms, such as theater criticism that art criticism , the architectural criticism , the music critics , the movie review , the food critic and the games criticism .

Pierre Bayle (1647–1706) is considered to be the first great modern theorist of criticism , who in his Dictionnaire historique et critique published in 1697 defined criticism as the activity that separates reason and revelation, and thus took the decisive step towards a practice-oriented concept of criticism . Science and religion, which had previously formed a unity as exegesis , were strictly separated here for the first time, the textual criticism became non-denominational and critical of religion, and the concept of criticism could from now on be applied to areas in which this had never been done before.

In the writings of the English philosopher Shaftesbury (1671-1713), the concept of criticism was central. Shaftesbury wanted to make the judgment of people sharpened in dealing with art usable in other areas of life, especially in those that make up their central happiness: their freedom and humanity. For him, criticism was above all self-talk and self-criticism; man has to check his own judgments and motives for action in order to develop and sharpen his judgment. Self-knowledge must precede every other knowledge, because only this is completely reliable; but since man is by nature a social being, self-enlightenment must be followed by enlightenment, the public use of reason. For Shaftesbury, criticism was the fundamental mindset of civilized society. For him, the concept of criticism became universal in the sense that it no longer only concerned aesthetics, but now also included ethics . Shaftesbury assigned the task of developing and using good judgment to writers and (literary) critics in particular.

His student Henry Home published his work Elements of Criticism in 1762 ; the underlying concept of criticism as an assessment and rational knowledge of the beautiful later had a strong influence on Kant.

The first name usually mentioned when speaking of the concept of criticism in philosophy is that of Immanuel Kant . Kant's ambitious concern was to go fundamentally beyond ontologically oriented philosophy, which “only” deals with beings , and to produce a science - transcendental philosophy - that should describe how knowledge arises and where it is based. Since 1763 he used the term “criticism” for the propaedeutic method with which he wanted to design the “architectural plan” of a “system of all principles of pure reason”:

“Such a criticism is accordingly a preparation, where possible, for an organon, and if this should not succeed, at least for a canon of the same, according to which at most one day the complete system of the philosophy of pure reason, it may now be an extension or a mere limitation their knowledge, could be presented both analytically and synthetically. "

By “criticism” Kant understood the transcendental self-criticism of reason, the judgment and correction of knowledge. From the beginning, the structure of the form of knowledge “criticism” referred to aesthetic connections; however, he then applied them to other areas as well.

The Kantian concept of criticism is, however, more complex and extensive than the choice of words of the titles of his main works ( Critique of Pure Reason , Critique of Practical Reason and Critique of Judgment ), and far more than a mere synonym for the terms Kantian and transcendental philosophy , with which he is often wrongly equated.

Karl Marx also used the term in the same sense as Kant , for example in his work On the Critique of Political Economy (1859).

The task of criticism can be narrower or broader. More narrowly, criticism is used to evaluate an object or behavior. In contrast, philosophers such as Michel Foucault see the task of criticism in a broader framework or in a framework that goes beyond the judgment of objects. After that, the main task of the critic should be to make the "system of evaluation itself" recognizable.

This distinction is made because evaluations correspond to a certain system of norms (→ normativity ) and thus the criticism and the subject making this evaluation are subject to a given norm. This system of norms can be called “ truth ”, for example . In order to escape this lack of freedom of submission, Foucault offers to question the system of evaluation itself and to form a more independent picture of the meaning and purpose of these “truths”, “discourses” etc. The aim is to escape the compulsive mechanisms that compel a subject to be shaped.

Criticism is not something general, but a specific activity of reflection on an object of reflection that is carried out from a very specific place. Depending on the epistemological context, these places or positions are referred to using the terms institutionalized practice , discourse , episteme or institution .

Criticism is then no longer recognizable as criticism when “it only stands there as a purely generalizable practice.” This is where criticism is differentiated from other terms, such as scribbling .

The advocates of critical theory subjected Marx's writings to a comprehensive reinterpretation. So they understood their core messages not as a philosophy of history or economic science, but as an ( ideological ) criticism of bourgeois - capitalist society. The critical theory developed into a culture-critical metatheory of western industrial culture.

Criticism and self-criticism played a central role in political practice in the People's Republic of China under Mao Zedong . Their goals were to overcome “any political pollution” and to increase the “fighting ability of the party” .

Criticism in other scientific disciplines

A central task of historians is the source criticism ; this is the assessment, following certain methods, of those written and non-written sources from which historical science draws its knowledge.

The methodological inventory of edition science includes textual criticism , which in the 19th century a. a. was developed by Friedrich Schleiermacher , Karl Lachmann and Friedrich August Wolf and which includes the tools needed for the development of historical-critical editions of literary and other texts. This even applies to Bible texts. The historical-critical method , which in the Protestant and Catholic theology today, the standard method of biblical interpretation , but includes more than textual criticism addition, methods such as literary criticism , redaction criticism , which form criticism and tradition criticism .

Depending on the object of the criticism, one differentiates:

As communication about problems, criticism is an indispensable prerequisite for solving problems. Since nobody likes to see their actions questioned, the recipient usually perceives them as unpleasant. Conversely, people are reluctant to give criticism because they know that it is hardly welcome. The learned ability to accept criticism not as an attack on oneself but as a useful clue for improving action, and the learned ability to practice and formulate criticism in such a way that, instead of offending , it motivates on the contrary , is referred to as critical competence . It is therefore considered to be a component of the more general social skills .

A distinction must be made between active and passive critical faculties . If the term is used without one of these attributes, the type should emerge from the context, otherwise the quality of the source must be questioned. Both forms are usually graded.

Criticism outside the western world

Criticism plays an important role in Confucianism . The Chinese know for "criticism" and "criticize" more than 50 words.