Shiver people with their vice

The word Schauermann is derived from the Dutch sjouwen ("drag, work hard"). A sjouwerman was originally someone who “waded through the sea and carried loads of or on board”. 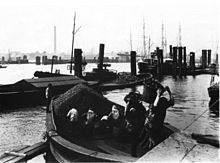 Showers were mainly former or unemployed seafarers who had knowledge of the proper loading and unloading of general cargo in the ships, because the cargo must not slip during a sea voyage, as this could lead to a dangerous shift of the center of gravity and even capsizing of the ship. The showers were usually day laborers who were hired on short notice when work came up.

The associated crews were usually responsible for stowing the ships; In special situations, showers were called in if special speed was necessary or the crew had already been withdrawn, but the captain had not yet sold his cargo.

The term shower was first mentioned in Hamburg in the middle of the 18th century . From 1840, with the advent of steamships and the increase in the exchange of goods, showmen were needed in large numbers. The ships' crews became smaller. From 1910 to 1930 the greatest number of showmen were employed in the ports. In the period after the Second World War , showers were increasingly in demand. For example, a Mannheim company employed 2000 “bag carriers” in the 1950s alone. With mechanization and since the advent of the container , this profession has changed to today's port skilled worker.

On the ships, the showers were usually put together in working groups at the respective hatches ; these groups were called " gang " according to the English pattern and their foremen "stevedore". The stevedore vice was bound by the instructions of the cargo officer .

The so-called black showers were busy handling coal. As can also be seen from this name, the shower job was very dirty work, which was also very physically strenuous and dangerous. 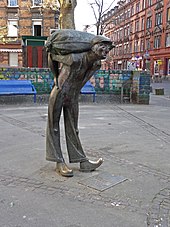 Wikisource: Ordinance concerning the enactment of the Law on the Extension of Accident and Health Insurance (1886), etc. a. also on people who were shivering  - sources and full texts