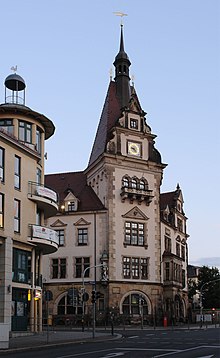 The Südvorstadt belongs to the Dresden-Altstadt II district . As formerly independent municipalities, all other parts of the city form their own boundaries.

The city district office (then: Ortsamt) initially had its domicile in the former seat of the Dresden-Süd city ​​district on Fritz-Foerster-Platz in the Südvorstadt, and from 1991 onwards the name of the Ortsamtsbereich Südvorstadt was valid. After the local office moved to the premises of the former town hall of Plauen at the end of the 1990s, the local office area or now the city district of Plauen received its current name.

In the city council elections up to 2014, parts of the Plauen district are assigned to two constituencies:

Since 2019, the Plauen district has been its own constituency in the city council elections. (Constituency 9)

City districts and localities in Dresden