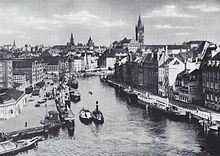 Hundegatt - the old port on the new Pregel in Königsberg

The actual Königsberg harbor was built in 1902 when construction of the inner harbor began. Until then, the course of the Pregel with its two arms served as a port. After the First World War, three new harbor basins were built in the west of the city. 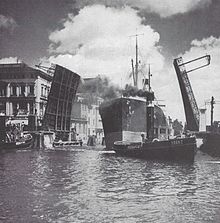 Krämerbrücke in the city center

The port of Königsberg achieved national importance as early as the Middle Ages. The Teutonic Order not only traded in amber , copper , wax and fur, in grain and wood through the large shepherds in Königsberg, but was also one of the largest trading companies of its time. In contrast, the trade of the cities belonged to the Hanseatic League . Altstadt (Königsberg) had already joined it in 1339, Kneiphof later. Löbenicht had only temporarily belonged to the Hanseatic League. Was traded with herring wood, ash , tar , furs , flax against dining and pickling salt , cloth , rice and wine . In 1365 Grand Master Winrich von Kniprode gave the stacking right , which was confirmed in 1518 by Grand Master Albrecht . In 1526 Gustav I. Wasa opened all Swedish ports to the Königsbergers. In 1566 the Königsbergers wanted to tolerate the Jewish merchants if they did not store their goods. In 1608 614 Dutch ships came to Königsberg with salt and grain. In 1623 500,000 bushels of grain were exported. In 1772 the salt trade became the privilege of the salt carriers of the new (Prussian) sea trading company . In 1782 Frederick II confirmed the stacking right. In 1784 the export of 3 million bushels of grain brought 400,000 thalers. The Crimean War brought a trade boom in 1855.

In 1730, 872 ships entered Königsberg. In 1800, 684 ships left. In 1811 the port facilities were transferred to the Königsberg merchants. In 1828 the Copernicus , built in Elbing , was the first steamship to call at Königsberg. In 1839 the steamboat Anna Henriette and in 1840 the Gazelle ran regularly between Königsberg i. Pr. , Pillau and Danzig . The first iron steamship Schnell sailed between Königsberg and Tilsit in 1855 . The Association for the Rescue of Shipwrecked People was founded in 1866 by Karl Heinrich Burow and Robert Kleyenstüber . The motor rescue ship stationed in Pillau was named "Consul Kleyenstüber". In 1872 3741 ships were unloaded from the port. In 1882 the first steamboat ferry operated across the Pregel. In 1901 the Königsberger Seekanal was opened. In 1904 the hangar was built and the expanded inner harbor opened. In 1917 the buildings for the port expansion had to be stopped. Königsberg's sea trade was served by the Lastadie am Hundegatt and the seaport in Pillau . Even today one can find numerous references to the old connection in other Hanseatic cities , for example in the Hamburg town hall . In the middle of the city, on the old town Pregelufer, was the fish market, which was supplied by sailing boats with catch from the Fresh Lagoon . The shipping company Robert Meyhoefer was of particular importance . 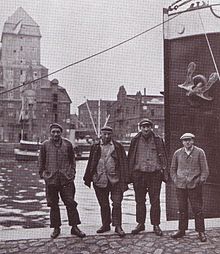 As stevedores who took Sackträger on the Lastadie a special position. They were subordinate to the office of the merchants, were free workers and were paid relatively high. It was no small matter to carry two-centennial sacks on your shoulders day in and day out up the steep ladders of the steamers and to the roller lifts of the granaries. Those who couldn't keep up dropped out by themselves. They formed groups of ten to sixteen men under a foreman. They had tied the blue linen trousers against the dust above the knees, wearing patterned shirts and on the head of the Krätzchen ; because of course these giants had been soldiers. Most of them grew old, were good-natured, had a dry sense of humor and were very quick-witted. A break was called "en Piepke Tobak". Their special schnapps were “blood ulcer” (egg cognac and cherry liqueur), “storage rat” and “elephant dubs with set egg”. The stevedore house for the entire port operations was at Friedrichsburgstrasse 19, next to the old fortress Groß Friedrichsburg .

New port facilities for the "Island of East Prussia"

Industrial port and wooden port on the Pregel

Group and tower storage in the industrial harbor

The separation of East Prussia from the German Reich after the Treaty of Versailles made it necessary to develop the Königsberg port into an ocean port. Three port basins were created in Contienen , the commercial port, the industrial port and the wooden port. For the "Island of East Prussia", sea and air traffic to the rest of the Reich were an important factor in economic life from 1920 until the attack on Poland . In 1921, the port expansion began with the new industrial and commercial basin on the lower reaches of the Pregel. The plans were from city planner Cornelius Kutschke (1877–1968). Hans Lohmeyer opened the new port in the year of the Königsberg Kant celebration (1924) . The quay depth was 8 m. The quay walls were 7.8 km long. The storage space was 100,000 m 3 . In 1930 Königsberg had the most modern Baltic Sea port. In 1938 the traffic had grown to 4,210 ships. The last port director was Marjan Schultz .

In 1924, a new seaport basin was created on the lower reaches of the Pregel. The main reason for this was the Polish Corridor with its slow, trouble-prone border clearing. From a pure river port (Pregel) it has now become one of the most modern sea ports in the Baltic Sea. Three modern harbor basins were created, along with storage buildings and modern loading facilities. The new harbor basin III with its flat warehouses was used for general cargo traffic and was given a grain store on the west side in 1939/40. Harbor basin IV, where Europe's largest granary was built, was used exclusively for the grain trade, while harbor basin V, located in the far west, served the timber trade. The new port now had almost 8 km of quay walls, 160,000 m 2 of shed and storage space, a cold store, tank systems, 30 mechanical cranes and a port station. By deepening the sea canal by eight meters in 1930, the seaward connection of the Königsberg harbor area was also decisively improved. The fairway was kept open by icebreakers even in the harshest winter. In the 1930s, the port was considered the most modern port in the Baltic Sea with 4210 ships unloaded in 1938. Nevertheless, seagoing ships up to 3000 GRT were still able to  sail across the entire city center to Feldmühle Sackheim on the new Pregel . The old Pregel was up to the woodworking factories cattle market for ocean-going vessels to reach, but also vegetables barges from the Elchniederung were at the fish market and the Junker Garden deleted.

A particular advantage of the Königsberg port compared to the ports further to the northeast was its "freedom from ice", i. H. the port was accessible and navigable even in winter. The new Königsberg commercial, industrial, timber and free port, which comprised five large harbor basins, was considered to be with its modern grain stores (the largest in Europe), which enabled fast mechanical handling, cleaning, refinement and restacking of the grain most modern port in the Baltic Sea. The throughput of sea traffic in 1938 amounted to 3.9 million tons, the throughput of inland water traffic from Pregel, Deime, Großem Friedrichsgraben , Curonian Lagoon , Memel and the Masurian canals to 3,400 barges with 950,000 tons.

Pillau was the port of call for the passenger ships . The East Prussian Operation (1945) forced hundreds of thousands to flee via Pillau.

Wikisource: In the Koenigsberger Hafen  - sources and full texts