The title of this article is ambiguous. For the bishop of the same name, see Winrich von Kniprode (Bishop) († 1419). 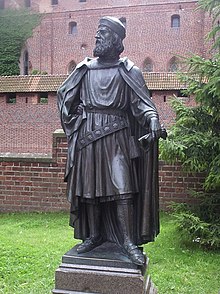 Winrich von Kniprode in a historicizing representation in the Marienburg

Memorial stone to Winrich von Knirode in Monheim am Rhein

Winrich von Kniprode (* around 1310 in Knipprath, a former district of Monheim am Rhein ; † June 24, 1382 near Marienburg , Polish Malbork ) was the 22nd Grand Master of the Teutonic Order . He held this office from 1351 to 1382. This epoch saw both the heyday of knighthood and the heyday of the religious state .

Winrich von Kniprode came from a knight family on the Lower Rhine. He was born around 1310 in Knipprath, which gave the family its name, a former district of Monheim am Rhein . Nothing is known about the time of his entry into the order; its first mention as Kompan of the caretaker of Prussian Holland dates from the year 1334. From 1338 to 1341 Winrich von Kniprode was Komtur von Danzig , in the year 1342 Komtur von Balga . During the time of Grand Master Ludolf König von Wattzau , he led the order's army from 1341 to 1346 as Order Marshal and Commander of Königsberg .

His predecessor as Grand Master, Heinrich Dusemer , appointed him Grand Commander in 1346 . As such, he won together with the Order Marshal Otto von Danfeld in winter 1348 with a force of the Lithuanian Grand Duke Kęstutis in the Battle of the Streva southeast of Kaunas .

After Heinrich Dusemer's abdication due to illness, Winrich von Kniprode was elected Grand Master on September 14, 1351. He remained in this office until his death in 1382, making him the longest serving Grand Master of the Teutonic Order. His reign is considered to be the high point in the history of the order state . At that time it became fashionable among the Western European nobility to embark on so-called war trips against Lithuania . This is how the tradition of the Crusades was continued in a specific way . Winrich succeeded in putting these bellicose ambitions of the occidental nobility in the service of the order (see: Prussian trip ). Under Kniprode's aegis, the order also exerted influence on the domestic political conditions of the hostile Lithuanians (e.g. the Treaty of Daudisks in May 1380 with Grand Duke Jogaila , later King Władysław II of Poland, against his uncle and rival Kęstutis ).

The administration was modernized and the economy was sustainably promoted. So the order appeared with its own trade organization, represented by so-called Großschäffer , as a competitor of the Hanseatic League , which is reflected in its status as sovereign along with the corresponding regalia (rights) such. B. the amber monopoly proved to be very profitable. Settlement activities on the Vistula and in the so-called wilderness (the primeval forest areas on the border with Lithuania) continued as planned. Notable successes in the religious order were particularly evident in sheep and beekeeping as well as in viticulture. In the fight against usury of interest rates , the maximum permissible interest rate was reduced from 12.5% ​​to 10%. At the same time, new silver coins were issued: the shilling at 12 pfennig, the half sheet at 16 pfennig and the four at 4 pfennig. The Prussian coin system was finally determined as follows: 1 Prussian mark = 60 shillings = 720 pfennigs.

In the ongoing war against Lithuania , the order army led by him and the order marshal Henning Schindekopf won a decisive victory over a Lithuanian army on February 17, 1370 in the battle of Rudau (north of Koenigsberg ).

During his time, a strong secular spirit gained influence in the Order. Winrich fought this by introducing a kind of rotation system within the middle and higher order offices including strict accountability when changing office. In addition, unannounced visitations were carried out in the individual committees. In addition, measures were taken to strengthen the discipline and order of the members of the order. For example, the emerging tendency to ostentatiously was countered with a tightened dress code. In order to maintain the ability of the citizens to defend themselves, reservist exercises were carried out from time to time.

At the same time Winrich tried to raise the general level of education. General schools were established in the cities. In Marienburg the establishment of a college for higher education of the members of the order took place.

In 1366 Kniprode received the Polish King Casimir III as the first Grand Master at the Marienburg . He also supported the fight of the Hanseatic League against the Danes, which ended successfully for them in the Peace of Stralsund . He continued the construction of the central castle and had the city ​​walls built around Marienburg .

Winrich von Kniprode died on June 24, 1382 and was buried in the Annenkapelle in the Marienburg .

Sustainable due to his long reign in times of relative economic and military stability, Winrich von Kniprode went down in history alongside Hermann von Salza as the best-known Grand Master of the Teutonic Order. A fast steamer still bore his name in the 1930s. In some German cities streets are named after Winrich von Kniprode, for example in Wilhelmshaven or in the Berlin district of Prenzlauer Berg . A Catholic elementary school in his presumed birthplace Monheim am Rhein also bears his name.