Battle of Rudau (Dudau)
Part of: Lithuanian Wars of the Teutonic Order

The battle of rudau (also Dudau ) was a battle during the Litauerkriege between the Teutonic Order and the Grand Duchy of Lithuania in 1370. The German Order of Knights defeated together with allied troops during the Battle of the Lithuanian contingents and their allies devastating. For the Teutonic Order, however, the battle turned out to be a Pyrrhic victory .

Since the beginning of the 14th century there has been a constant guerrilla war between the Teutonic Order and the still pagan Grand Duchy of Lithuania . The declared aim of the Teutonic Order remained the fight against the infidels. Which is still against the Christianity blocking Lithuanians offered themselves as an ideal opponent, their settlements were at every opportunity levies devastated the Teutonic Knights. As a result, a “crusade dynamic” set in in the West, allowing numerous knights from Western Europe to prove themselves in “Heidenkampf”, ie raids on Lithuania (see: Prussia ). As early as the 1340s, Lithuanian troops repeatedly invaded the Order, especially under the direction of Kęstutis from 1360 onwards they completely destroyed various castles, including Splitter ( Tilsit ), Neuhaus, Caustriten and Schalauerburg.

Around 1367 the Lithuanians had left the order country again for the time being, and the devastated country was settled again. At the beginning of Lent, in February 1370, another strong Lithuanian armed force crossed the border of the Order. Almost the entire armed force of the Grand Duchy of Lithuania, immensely strengthened by subjugated allies, under the two Grand Dukes Algirdas and Kęstutis, attacked the order state along the coastline of the Fresh Lagoon . 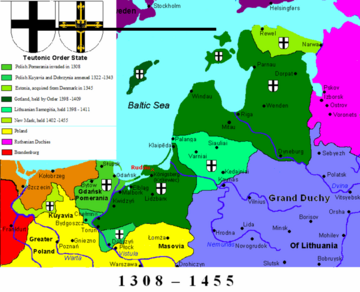 Location of the Battle of Rudau

That army was led next to the Lithuanian prince Algirdas again by his younger brother Kęstutis . The presence of the two Lithuanian grand dukes confirmed the planned sustainability of this campaign (Algirdas' ambitions were previously exclusively focused on the East). According to tradition, the Lithuanian army was 70,000 strong, but it was not all Lithuanians. Among the alleged 70,000 were about 20,000 Russians who followed the Lithuanians as allies. Furthermore, about 10,000 Samaites and even tributary Tatars were on the side of the Lithuanians. Modern estimates, however, assume a maximum of 17,000 fighters on the part of the Lithuanians, which also relativizes the numerical proportion of the allies.

The Teutonic Order under Grand Master Winrich von Kniprode and Order Marshal Henning Schindekopf then led a united army in two pillars against the Lithuanians. According to tradition, there were around 40,000 fighters. Realistic estimates, however, assume a maximum of 10,000 contenders. About half of them were Germans from the ranks of the order itself, plus there were conscripts from the Prussian nobility (knights, heavy riders and infantry). Furthermore, Germans, French, Spaniards, English, Scots and other war travelers who happened to be present (see: Prussian Trip ) also fought under the banner of the order. The remainder of the contingent consisted of Estonian branches of the Livonian branch of the order , which was led by some Danish knights and their entourage.

In any case, the Lithuanian army outnumbered the order, which could only be partially compensated by better equipment.

On February 17, the two armies met north of Rudau (today: Melnikowo , Selenogradsk Rajon , Kaliningrad Oblast , Russia ) 17 km north of Koenigsberg. The battle was extraordinarily lossy for both sides, although the course can only be partially reconstructed, among other things through the loss information. The Danish-Estonian contingent on the left wing of the order's army had presumably successfully pushed back the Samaites, but was repeatedly attacked by the Tatars with long-range weapons (bows), which in particular severely decimated the more easily armored infantry.

At the same time or shortly afterwards the war-traveling knights (guests of the order) and mounted order banners crossed the Russian detachments (foot fighters) preceding the Lithuanian battle line. While the center of the order's army met the mounted Lithuanians after the destruction of the Russian detachments, the knights from Western Europe were now attacked in the flank by the fast Tatars and engaged in close combat, which means that they do not intervene in the decisive battle against the center of the Lithuanians for the time being could. Due to the lack of support, the troops of the Order from Prussia attacking in the center suffered heavy losses in view of the great superiority of Lithuania. The impetuous attack of the core force of the order was halted, the fight remained undecided for the time being. The Order Marshal Henning Schindekopf , who was riding in the first line of battle , was fatally wounded in this phase of the battle.

Apparently the Danish-Estonian contingent was still strong enough afterwards to push away the lightly armed Tatars together with some banners from Western European "guest knights". The Tatar squadrons were subsequently driven from the battlefield by Danish knights and the light Estonian cavalry, while the heavily armored "guest knights" were able to support the hard-pressed knights of the order with a surprising flank attack, whereupon the Lithuanian elite under the leadership of Kestutis was crushed has been.

In the ranks of the order almost 200 knights are said to have been slain, including several commander . Tradition says that there were 26 fallen commanders. Marshal Henning Schindekopf was also badly wounded and died on the way to Königsberg. On the part of the order and its allies, the casualties amount to around 3,000 men. The Lithuanians' losses were significantly higher. Nevertheless, the Samaites seem to have left the battlefield quite early without major losses. The Tartars did not suffer any major losses due to their fighting style. On the other hand, the Russian contingent was probably almost completely wiped out, and even among the Lithuanians only a few capable men were able to save themselves.

The leaders of the military campaign, Algirdas and Kęstutis, saved themselves, as a result, the victory at Rudau remained an overwhelming but costly victory for the order. Only a year later, smaller Lithuanian troops attacked castles and settlements in the borderlands again. The war dragged on, despite the onset of Christianization of Lithuania from 1386 until 1410, namely the battle of Tannenberg .

In the battle, a Königsberg journeyman shoemaker named Hans Sagan is said to have rushed to the side of the falling standard bearer of the order marshal Henning Schindekopf to hold up the order banner until victory. In view of his courage, the steadfast follower was later ennobled by the Grand Master (or by Emperor Charles IV ), which explains the name "Hans von Sagan", which later became known.