This article covers the peninsula in the Baltic Sea; for other meanings see Samland (disambiguation) .

The Samland is a peninsula in the eastern Baltic Sea . As the western part of northern East Prussia , the Samland has belonged to Russia since 1945.

The common name Sambi may mean one of his or her family members . A derivation from the old Prussian word semmē = earth is also conceivable . Semba was the proper name of the local population; They were called Semben in the old Norse language of the Danes . The Danish stock book calls the Samland 1268 Zambia . The Finno-Ugric Sami people living in Lapland have nothing to do with "Samland".

Wachbudenberg on the northwest corner of the Samland

The approximately 75 × 30 km large peninsula is the remainder of the tertiary Samland base and protrudes into the Baltic Sea between the Fresh Lagoon , the Curonian Lagoon and the Spits . The eastern part is flat, the western part is hilly. The highest point is the Galtgarben in the Alkgebirge at 111 m . In the north and west the Samland has mostly cliffs , in the south dunes . In the inland south and east, the Pregel and Deime are the borders. The Deime runs from Gwardeisk (Tapiau) to Polessk (Labiau) and flows 4 km further into the Curonian Lagoon. The most important cities in Samland were the old town , Kneiphof and Löbenicht , which were merged in 1724 to form the royal capital and residence of Königsberg .

The Samland was first mentioned in a document in the 5th century BC. BC by Herodotus , who called it "amber land". The landscape was populated by Prussians around the year zero . In his work "Germania" Tacitus wrote that the Aesti were the eastern neighbors of the Goths in the Vistula Delta.

As early as the 19th century, archaeologists discovered a Viking Age burial ground south of the Curonian Spit near Wiskiauten, not far from Königsberg . The 500 hill and earth graves are around 1000 years old. They contain weapons, jewelry and clothing that clearly follow Scandinavian models. Archaeologists from the German Archaeological Institute around Siegmar von Schnurbein and the Archaeological State Museum Schleswig (Foundation Schleswig-Holstein State Museums Schloss Gottorf ) around Claus von Carnap-Bornheim found ceramics , slag, bones and processed amber in 2006 in cooperation with Russian archaeologists . Silver coins and weights had surfaced earlier. The finds from the 10th to 12th centuries indicate a settlement near the Curonian Lagoon, possibly an early center of the amber industry with good connections to Scandinavia . The excavation site will remain the subject of intensive research in the future.

The Samland is one of the old Prussian districts. As a papal legate , Wilhelm von Modena divided Prussia (historical landscape) into four dioceses: the Archdiocese of Warmia , Pomesania , the Principality of Samland and Kulmerland . The Samland was conquered from Balga by the Teutonic Order . In the Teutonic Order state , Königsberg (1255), Labiau (1258) and Tapiau (1265) were important order castles and city foundations. For a long time the Samland was one of the last settlement areas of the Prussians . Later it became a central part of East Prussia . The Principality of Samland played a major role in the history of Prussia.

In the middle of the Samland lies Chrabrowo (Powunden) with the Kaliningrad airport . The amber deposits near the coastal town of Jantarny (Palmnicken), which are mined in open-cast mining , are also significant . Day tourism on the Baltic coast plays an important role for the Kaliningrad Oblast . Since the 19th century, the seaside resort tourism developed especially in Cranz and Rauschen . This collapsed in the East Prussian Operation (1945) . After perestroika , it took off again in the 1990s.

From 1939 to 1945 the Samland districts Fischhausen and Königsberg (Pr) were combined to form the Samland district. The Samland Plan provided for the construction of a new university town in the Fritzen Forest north of Königsberg. It was related to the ordinance on the reorganization of Königsberg published in the Reichsgesetzblatt in March 1941 . After the flight and expulsion of the originally resident Germans, mainly Russians , Ukrainians and Belarusians now live in the region. Beate Uhse , Volker Lechtenbrink and Wilhelm Wien come from Samland.

According to legend, Samo was the second son of King Widowuto , who received the land from Crono and Hailibo to the Skara (Pregel). He built the fortress Gailgarwo ( Galtgarben ) on a mighty sand mountain, which was partly heaped up . Samo had a "special way of life with his family, because they were more devout than the other Bruteners". They chose a special oak forest as a place of worship and kept "a bunch of snakes in honor of their gods" there. Samo had fewer children than his eleven brothers, because his wife Pregolla drowned in the Skara, which is why the river was named Pregel . 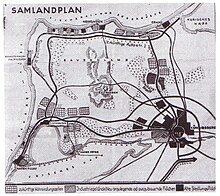