This article covers the castle. For the Austrian director, see Alex Balga . 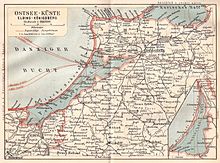 Balga near Heiligenbeil , on the west side of a promontory protruding into the Fresh Haff , northeast of Elbing and southwest of Königsberg i. Pr. , On a map from 1910.

Balga or Honeda (Russian Бальга or Bal'ga , Polish Bałga ) is the name of a castle and former locality in the Russian Kaliningrad Oblast ( East Prussia until 1945 ). The spot is named after the Prussian castle (pr. Balgnan = saddle), which was captured by the Teutonic Order in 1239 in the course of Christianization and then expanded and fortified. The name Wuntenowe used at the same time refers to the location on the water (Old Prussian: undan, Wundan ). From this the German name Honede / Honeda developed.

The associated village of the same name, located in the immediate vicinity of the castle, was renamed Vessjoloje after 1945 and belonged to Pjatidoroschnoje ( Bladiau ) in Bagrationovsk district ( Prussian Eylau ). Since the 1980s at the latest, it has no longer been an independent village.

Balga is located in East Prussia on a diluvial peninsula that protrudes into the Fresh Lagoon near the town of Mamonowo ( Heiligenbeil ), about 30 kilometers southwest of Kaliningrad ( Königsberg ) . The village is now in the area of ​​the Russian enclave Kaliningrad ( Koenigsberg ), Bagrationovsk district .

From the Russian trunk road A 194 (former Reichsstrasse 1 , now also Europastrasse 28 ) branches off northeast of Mamonowo ( Heiligenbeil ) near Bogdanowka ( Gnadenthal ) a side road via Snamenka ( Groß Hoppenbruch ) to Balga. Snamenka is also a train station on the railway line from Malbork ( Marienburg ) to Kaliningrad of the former Prussian Eastern Railway .

History of the castle and village since the Middle Ages 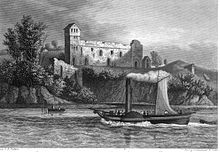 Ruins of Balga Castle around 1840 (steel engraving after a drawing by B. Peters).

During the crusade of the Teutonic Knights against the Prussians , the aim of which was to Christianize them, Margrave Heinrich von Meissen tried to take the Prussian castle Balga with two crews as early as 1238 , but it failed. In 1239, however, the castle was taken under the order of Marshal Dietrich von Bernheim and could also be held with the help of Duke Otto of Braunschweig . The castle, which lies on a saddle-shaped hill, was then expanded into a fortress of the Teutonic Order. It was the oldest order castle of the Teutonic Order State in the area of ​​today's Russian exclave Kaliningrad. From 1250 to 1499 it was the seat of the Komtur der Kommende Balga and an order convent and, because of its location directly on the Frischen Haff, played an important role in controlling shipping traffic on the lagoon. The Coming Balga bordered on the Gau Barten in older times . The Prussian tribal areas Warmia and Natangen were conquered from Balga Castle .

When Bishop Georg von Polenz handed over the Samland to Duke Albrecht of Prussia , the Bishop was given the post of Balga for life , which had previously been a main post ; He occasionally lived in Balga Castle from 1526 to 1550. In his time the castle began to fall into disrepair. In the period from 1525 to 1752, official governors or administrators and their clerks who administered the main office of Balga lived in the castle. In the 17th century, the main house was already badly dilapidated.

The Swedish King Gustav II Adolf used the castle as a magazine during the First Swedish War from 1626. In 1627, parts of the castle were demolished in order to procure building material for the Pillau Fortress. From 1700 onwards, King Friedrich I had stones broken in Balga to build a fortress in Pillau; by the end of the 18th century, the main house had been dismantled down to the remains of the foundation. A watch tower and a dilapidated wing remained of the outer bailey.

An estate and the small village of Balga, which had an evangelical church, belonged to the castle. Small farmers, gardeners, fishermen and later also seafaring families lived in the village of Balga. A royal domain office, the Balga office, was administered from Balga in the 18th century . At the request of Crown Prince Friedrich , King Friedrich Wilhelm gave the Balga administration to the officer Johann von Buddenbrock in 1736 . Around 1785, the office of Balga comprised two farms and 60 villages with a total of 961 households. Farm B, on which important horses, cattle and sheep breeding was carried out during the time of the order, became the domain, which was sold to the von Glasow family in 1849 and remained in their possession until 1945 as a manor.

In 1836 a new roof was added to the tower of the ruin; it was restored to its old form in 1929. In the period 1931–1945, a local history museum was housed on its floors, which was run by the Heiligenbeil district administration. The village church has a peculiar portal from the 1st third of the 14th century. To mark the 700th anniversary, a memorial stone with the dates »1239–1939« was erected in front of the rectory.

The village of Balga, which until 1945 belonged to the district of Heiligenbeil in the administrative district of Königsberg , had around 850 inhabitants in 1906.

Towards the end of the Second World War , in March 1945, Balga was the last bridgehead of German army units on the eastern bank of the Haff. The restored castle tower was destroyed again in World War II and is now in ruins . From Balga, when the tide was low, tanks, cars and wagons sunken in the lagoon could be seen long after 1945.

In Balga the fairy tale takes place about the two royal children who could not get together.

There is now a small private museum near the castle ruins.

Between 1874 and 1945 Balga formed its own administrative district in the Heiligenbeil district .

Due to outsourcing and reclassification as well as community changes (for example through the dissolution of the manor districts), the affiliations changed in the period that followed. On January 1, 1931, five rural communities were incorporated into the Balga district by 1945: Balga, Follendorf (Rybakowo), Groß Hoppenbruch (Snamenka), Kahlholz and Wolitta.

Balga was an old church and until 1945 belonged to the church district of Heiligenbeil (Mamonowo) in the church province of East Prussia of the Church of the Old Prussian Union , with predominantly Protestant residents . 12 places were attached to his parish :

From the Reformation to 1945, the following were officiating as Protestant pastors in Balga:

Personalities of the place

(in order of appearance)