Vistula is a redirect to this article. For the asteroid see (16689) Vistula .

Location of the Vistula in the Polish water network 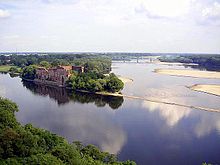 Confluence of the Narew (left) and Vistula (right) near Modlin 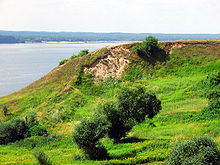 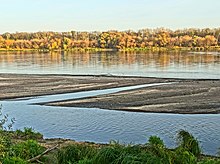 From Mewe Castle in Gniew

Malbork in the Vistula Delta

Elbing in the Vistula Delta

Gdansk in the Vistula Delta

The Vistula ( Polish Wisła (  [ ˈvʲiswa ] ), Czech Visla , Latin Vistula ) is a 1048 kilometer long and by European standards largely unregulated and natural river and the longest river in Poland . The catchment area also includes parts of Slovakia , Belarus and Ukraine . The longest course of water in their river system is the 1213 kilometers from the source of the Western Bug to the Baltic Sea.

The spelling W (e) ixel or Wissel can also be found on old maps .

There is disagreement as to whether the name Vistula is of Indo-European or pre-Indo-European origin. The Polish name Wisła is derived from the Latin Vistla . The letter pair -tl- was simply replaced by the Polish -ł-. This is also the name of the first city through which the Vistula flows.

The river has its source in the municipality of the town of the same name in the Silesian Beskids at an altitude of 1107 m above sea level. NN or 1080 m. ü. NN on the south-western slope of the Barania Góra from the streams Czarna Wisełka and Biała Wisełka , which flow into the Jezioro Czerniańskie reservoir after nine and seven kilometers, respectively . The outflowing mountain stream is called Wisełka and only becomes the Vistula when the Malinka flows into it. In Ustroń it leaves the Silesian Beskids and flows through the densely populated Silesian foothills around Skoczów , where it takes up the Brennica , which also rises in the Silesian Beskids .

After leaving the mountains, the Vistula flows into the Auschwitz basin and turns to the east, where it forms part of the historical border between Upper Silesia and Lesser Poland . Shortly after Strumień it flows into the Goczałkowice Reservoir . It is navigable below the dam. Behind Auschwitz and the inclusion of the Soła , the wide Auschwitz basin narrows to the Krakauer Tor between the Gross Salzer Mountains in the south and the Tenczyner Ridge , part of the Krakow-Czestochowa Jura , in the north. About 70 km after the reservoir, the Vistula flows through the old royal city of Krakow (Kraków).

In Krakow , the Vistula leaves the narrow Krakow Basin and flows into the large tectonic depression of the Sandomir Basin , where it receives from the right the water of numerous Carpathian rivers that drain the Beskids , Pieninen and Tatras . In the Sandomir Basin, the Vistula flows eastward, on the southern edge of the Kraków-Czestochowa Jura and the Holy Cross Mountains . South of the basin joins the Subcarpathian Mountains and then the Roztocze to the east . From Niepołomice 25 km east of Kraków to a little below the mouth of the San , the Vistula was the border between the Habsburg Galicia and the Russian Empire from 1815 to 1916 . 70 km behind Niepołomice, the Dunajec , which has its origins in the High Tatras , flows into the Vistula. Soon after Sandomierz , the Bieszczady flows into the San, the easternmost Carpathian river, which drains into the Vistula. The upper course of the Vistula ends with the confluence of the two rivers south of Zawichost .

From Zawichost onwards, the Vistula Gorge begins to break through the Polish Plateau between the Lublin highlands in the east and the Kielc highlands in the west. Here it flows past old trading towns such as Kazimierz Dolny and Janowiec .

Further north near Puławy the Vistula reaches the Polish Plain , specifically the Mazovian Plain . Its poorly regulated middle course is characterized by numerous meanders and sandbanks that make shipping difficult. On the northern edge of its central reaches, the Vistula flows through the Polish capital in the Warsaw Basin .

The lower course begins at the confluence of the Narew in the Vistula. Shortly after Warsaw it reaches the area of ​​predominantly east-west oriented glacial valleys through which it flows from the east, shortly before united, the Bug and Narew. Here it turns strongly to the west in the Warsaw-Berlin glacial valley , to which the Thorn-Eberswalder glacial valley closes, and passes Płock , Dobrzyń nad Wisłą , Włocławek and Thorn . A large dam with a hydroelectric power station has existed near Włocławek since 1970 .

In Bydgoszcz , the city center is not on power, it leaves the great east-west glacial valley and breaks in the Unterer Vistula in Fordon breakthrough the Baltic country back . This includes the Pomeranian Lake District between the Vistula and the Oder , and the Masurian Lake District between the Vistula and Nyemen . In the last two decades of the 20th century, extensive regulatory measures were carried out on the middle reaches to improve navigability .

The flow of the river into the Baltic Sea was naturally blocked by the dune ridge of the Danzig Inland Spit , the western part of the Fresh Spit (Mierzeja Wiślana). A delta has formed between the ridge and the dune ridge. Shortly after Gniew ( Gniew ) which branches off to the east Nogat from, which was only in 1371 by a flood of self-flow (again) for Weichselarm and in the area of Elblag lowland into the Vistula Lagoon (Polish Zalew Wiślany so Vistula ) opens. Shortly before the dunes killing time naturally the main stream of the Vistula in the branched Elbinger or Konigsberg Vistula ( Szkarpawa ) , which also empties into the Vistula Lagoon and until the early 19th century was the main stream, as well as in the Gdansk Vistula, which near the town of Gdansk to The dune ridge broke through and which flowed into the Gdańsk Bay (Polish: Zatoka Gdańska ). During a flood in 1840, a new Vistula breakthrough emerged halfway between the fork and Danzig, whereupon the lower western part of the old estuary silted up. In the years 1889 to 1895, the dune ridge was pierced at the fork in order to reduce the risk of flooding in the Vistula Delta. Since most of the Vistula water flows through this Vistula breakthrough , in Polish Przekop Wisły , into the Baltic Sea, the Gdańsk Vistula as a whole has silted up and has increasingly been called Dead Vistula, in Polish Martwa Wisła .

The eastern arm of the Vistula, Szkarpawa, has in turn formed a delta. Its northernmost arm is still called Wisła Królewiecka ( Königsberg Vistula) .

The first written mention of the Vistula is a little more than 2000 years old and comes from Roman-ancient authors. During antiquity, the amber route ran from the Roman Empire over the Moravian Gate and along the Vistula, at whose confluence with the Baltic Sea was the Turso amber trading center .

Pomponius Mela named in 44 AD in the third book of the Chorographia (3.27) the visula as the border between Germania and Sarmatia . Pliny explicitly mentioned two names in his natural history (4.52, 4.89) in AD 77 : " Visculus sive Vistla ". The Vistla River therefore flowed into the Mare Suebicum , which is now known as the Baltic Sea.

Pliny also referred to the Vistula as the border river between the Germanic and Sarmatic areas of influence. Pliny referred to the East Germans living in the Vistula region as Vandili (Vandals) and named the sub-tribes Burgodiones ( Burgundians ) , Varinnae , Charini and Gutones (Goths) . The Goths only settled in the lower and middle Vistula in the last century before the turn of the times, but began to migrate again as early as 200 AD and can no longer be detected there from the 5th century.

Apart from the migratory movements, the names also changed: In his Germania, Tacitus called the Aesti or Aisti (probably synonymous with today's name Balten ) living east of the mouth of the Vistula as Germanic, but indicated that they were a language similar to British (Celtic) speak and distinguish them from the Suebi .

When Jordanes wrote a chronicle of the Goths, Getica , in the 6th century , he named the river Vistula. He also described two other rivers with the name Viscla. This name refers to the Wisłoka tributary and the San , Wisłok tributary .

Around 850 AD, the Prussians , who mostly live east of the mouth of the Vistula, were mentioned by the Bavarian geographer as "Bruz".

One of the first Polish chroniclers, Wincenty Kadłubek, described the Vistula as the hometown of the Vandals , from whom he derived the Polish legend of Wanda .

In the High Middle Ages, the Vistula gained an important role as a trade route from Krakow to Gdansk . However, the Vistula trade was affected by the occupation of Danzig by the Teutonic Order in 1308. After the Second Peace of Thorn in 1466, the Vistula was again completely on Polish territory. The more than 300 years between the Peace of Thorne and the First Partition of Poland in 1772 are considered to be the heyday of the Vistula trade and Gdańsk as a trading center that connected Poland-Lithuania with the Western European trading nations of the English and Dutch. Polish grain was exported to Western Europe via the Vistula and Danzig, when Poland-Lithuania was the breadbasket of the continent, and colonial goods were imported from Western Europe.

At the end of the 18th century, after the third partition of Poland , the Vistula and Warta found their way into the Polish national anthem Mazurek Dąbrowskiego as symbols of freedom .

Since the Vistula is only partially regulated, there are often high and low water levels. Floods usually occur on the upper reaches in early summer when the Carpathian rivers bring a lot of rainwater from the mountains into the valley. Floods in the middle and lower reaches usually occur after the snowmelt in spring. Three reservoirs were built on the Vistula for flood protection:

A fourth barrage is planned in Siarzewo . In addition, there are numerous reservoirs on the tributaries of the Vistula in the Beskids and Pienines , which are supposed to protect against flooding after heavy rain or snowmelt in the mountains:

Other reservoirs for flood protection in the Vistula river system are:

Between Oświęcim and Nowa Huta in Krakow , the Vistula is regulated to keep the water level stable for shipping and to protect Krakow from floods.

In September 2012 the water level in the Vistula was historically low and was 58 cm. During this time, centuries-old artifacts were found on the river floor . In August 2015, a new all-time low of only 41 cm was measured.

Eight voivodeships are part of the Vistula, which makes up half of all 16 Polish voivodships.

Downriver sequence, major cities in bold, population figures of cities as of December 31, 2016, municipalities that are not cities, in italics:

Sequence downstream with length information (from 300 km bold), runoff and size of the catchment area; indented tributaries of the tributaries near the mouth

The Vistula is navigable from just before Oświęcim to Gdansk , although in the upper reaches only the section Oświęcim to Nowa Huta in Krakow is developed as the Upper Vistula waterway with locks and canals. Below Krakow, the river meanders back to its original state, which makes more intensive navigation outside of tourist use by small pleasure boats and kayaks impossible. From Warsaw to Gdansk, the Vistula is navigable again for larger ships. It is part of the international waterways E40 from the Baltic Sea to the Black Sea and E70 from Antwerp to Klaipėda .

Already in its headwaters in the Silesian Beskids , the upper reaches of the Vistula is accompanied by the Goleszów – Wisła Głębce railway line . All major cities on the Vistula are connected to the Polish railway network.

The 1200 km long Vistula long-distance cycle path along the river from Wisła to Gdansk has been completed in sections and will be expanded further. The sections from the springs to Szczucin in the Silesian and Lesser Poland Voivodeships and from Dobrzyń nad Wisłą to Kwidzyn in the Kuyavian-Pomeranian Voivodeship are currently finished, which together makes up about half of the route.

Nature reserves directly on the Vistula:

The Kampinos National Park in Mazovia extends from the south to the Vistula.