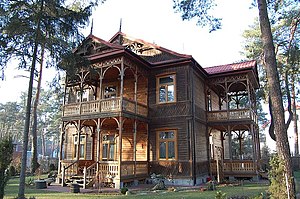 Otwock [ ˈɔtfɔtsk ] is a district town in Poland in the Masovian Voivodeship . The city is a former health resort.

The place is located on the Świder River , about 25 kilometers southeast of the Polish capital Warsaw .

The first mention of a property on the site of today's Otwock can be found in the 19th century. In 1887 it was connected to the rail network along the Vistula . During this time the real growth of the city began. In 1893 the first sanatorium for tuberculosis sufferers was built in the town.

At the end of the 19th and beginning of the 20th century there were 600 villas with around 2,000 inhabitants in the city. The place was an important starting point, especially as a recreation center. The town received its town charter on November 9, 1916 and Witold Kasperowicz was the first mayor. The first coat of arms also dates from this time. In 1917 there were 22 pensions and 3 sanatoriums in the place. The city only received official recognition of the place as a health resort in 1923. The city developed very well between the two world wars , with a stadium, casino, schools etc. The number of inhabitants was around 20,000 in 1938, and the number of health resort guests was twice that high. In 1939, 75% of Otwock's population was Jewish .

With the occupation of the city by the German Wehrmacht , the deportation of the Jews to Treblinka began . At the same time, underground activities by the Poles against the Germans took place. On July 31, 1944, the Red Army reached Otwock, which had lost about half of its inhabitants.

Until 1952 the city was part of the Powiat Warsaw , after its dissolution it was itself the district seat of a Powiat until 1975 . On June 14, 1958, the first nuclear reactor in Poland, the research reactor Ewa , was commissioned not far from the city , which was mainly an experimental reactor. The Maria research reactor , named after Marie Curie, followed in December 1974 . In 1995 the Ewa reactor was decommissioned , making Maria the only operating nuclear reactor in Poland.

From 1975 to 1998 the municipality was part of the Warsaw Voivodeship .

In 1999 the city became a county seat again . The city has been in partnership with Lennestadt since 1992 .

The town's first coat of arms dates from August 7, 1916. The center of the coat of arms was a blue shield with a golden chalice from which a pine grows. Snakes crept out of it on either side of the jar. The shield hovered over two pine branches, two more were to the left and right of the shield. The guilt is crowned by a wall with three towers. A white eagle sits on the middle tower and the white and red flag of Poland on the two outer towers. This coat of arms was the official coat of arms of the place until 1927.

The current coat of arms dates from August 2, 1926, the voivode was confirmed on May 16, 1927. The coat of arms consists of a split shield. The right side has a red background on which half of the eagle of the Polish national coat of arms can be seen. The left golden side shows a snake that looks up out of a vessel.