The title of this article is ambiguous. Further meanings are listed under Chełmno (disambiguation) . 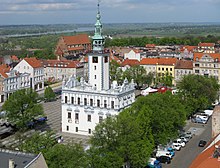 Chełmno [ ˈxɛwmnɔ ] pronunciation ? / i , German Culm or Kulm , is a city in the Polish Kuyavian-Pomeranian Voivodeship . It is the seat of the Powiat Chełmiński and has around 20,000 inhabitants.

The city is located in the Lower Vistula Valley ( Dolina Dolnej Wisły ) on the Fryba and near the right bank of the Vistula , the old town on a hill. It is located about 30 kilometers southwest of Grudziądz (Graudenz), 45 kilometers north of Toruń (Thorn) and 45 kilometers northeast of Bydgoszcz ( Bromberg ). The state road 91 runs along the city.

Historically, Chełmno belongs to the Kulmer Land , of which it was the main town. This belonged to Prussia's royal share in the Kingdom of Poland, to the Prussian province of West Prussia and to the Republic of Poland . 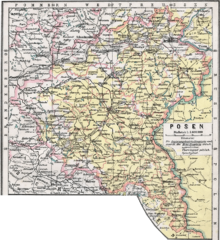 In the 7th to 5th centuries BC there was a settlement of the Lusatian culture on Lorenzberg (about three kilometers southwest of today's old town, near Kałdus ) .

Around 980 the area came under the rule of the Piast ruler Mieszko I. At the beginning of the 11th century, a large basilica was started on Lorenzberg, which was comparable to those in Poznan and Gniezno. During archaeological excavations, a settlement of 15 hectares with a cemetery with 1,500 graves was uncovered. The oldest written mention of this settlement of Culmen in the Kingdom of Poland is from 1065 . The area was then temporarily conquered by Prussians.

In 1222, Duke Konrad von Mazowien handed over the settlement and the surrounding area to the mission bishop Christian of Prussia . He handed them over to the Teutonic Order around 1230 .

In 1232 he founded a new settlement about two kilometers south, which he granted town charter to the Kulmer Handfeste in 1233 . This established the Kulm law , after which more than 200 places were granted city rights.

Around 1245/50 the place was moved a few kilometers downstream to its current location. The first mention of a bishop of Culm is from 1246 , but a few years later he moved his seat to Culmsee. A Dominican monastery was founded around 1238 , the first monastery to be founded by the Teutonic Order in Prussia, followed by a Franciscan monastery in 1258 and a Cistercian convent around 1266 .

In 1440 Culm became a founding member of the Prussian Confederation , against the rule of the Teutonic Order. In 1453 this subordinated itself to the Crown of Poland , since 1466 Prussia belonged to the royal share , as an autonomous region to the Kingdom of Poland.

In 1473 the brothers from the common life , who lived in the brother house of Culm , founded a particular school in Culm, which Nikolaus Copernicus probably also attended. From 1505 the bishops of Kulm owned the town. (However, they were sitting in Culmsee).

Reformation movements prevailed in the city probably around 1539. The Franciscan monastery was closed and the brothers from living together stopped working at school. In 1550 the council was Lutheran. In 1554 a Protestant grammar school was founded with the rector Johannes Hoppe , but it had to close again two years later.

In 1569, after the Union of Lublin , the city lost its autonomy, as did most cities in Polish Prussia. In 1580 the Bishop of Culm ordered that the Protestant residents should change their denomination or leave the city. Around 1612 this requirement was renewed.

In the 17th century the city suffered from the Polish-Swedish wars, then the Northern Wars. In 1678, therefore, freedom of religious affiliation was again granted in the city. Scottish immigrants, mostly Protestants, came over the next few decades.

By 1770 there were almost only Polish Catholic residents in the city, and only four or five German Protestant families.

With the first partition of Poland , Culm became part of the Kingdom of Prussia in 1772 . It was incorporated into the province of West Prussia there in 1773 . In the following years the council and the administration were completely replaced. More Germans came to the city and a Protestant church was built for them. In 1775 a cadet school was founded.

In 1837 the royal Catholic grammar school was founded. The students were mostly Polish, in 1840 Polish became the language of instruction.

Marketplace with town hall in the 19th century,

In 1883 the railway line from Kornatowo with a connection to Thorn and Graudenz was opened, and in 1902 the line from Unislaw was completed. Passenger traffic has ceased to exist since 1991 and 1970.

In the 19th century, Jews made up two to five percent of the population in Culm. In the 1905 census, 3,876 residents stated to be Protestant, 284 were Jews and 7,505 Catholics. In the Reichstag elections, alternating Polish and German constituency candidates prevailed in the Thorn and Kulm constituencies.

Until 1920 Culm county town was the county Culm in marienwerder the province of West Prussia of the German Reich .

On January 22, 1920, Culm was ceded to Poland on the basis of the provisions of the Versailles Treaty , without a referendum. A large part of the German population moved out of the corridor area in the following years.

After the attack on Poland in September 1939, the Kulmer Land was annexed by the German Reich in violation of international law and incorporated into the Reichsgau Danzig-West Prussia , to which Culm belonged until 1945.

Towards the end of the Second World War , the Red Army occupied the region in the spring of 1945 . The German city dwellers fled or were expelled . 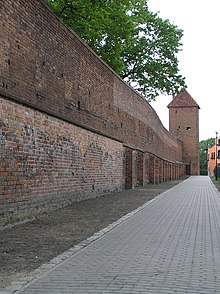 Several churches, chapels and other parts of buildings from the 13th and 14th centuries have been preserved in Chełmno. The city wall with 17 towers is one of the longest in Poland. In the Middle Ages there was a Teutonic castle, a Dominican , a Franciscan and a Cistercian monastery .

The floor plan within the wall ring is typical for the foundations of the German Ostsiedlung: a right-angled road network divides the area into almost square fields. One of them is the market square (Rynek) with the town hall. It is almost twice as long as it is wide, as are the squares built in a row with it. The old town has an almost closed old structure, but apart from the town hall and the medieval churches, it consists mostly of eaves-standing houses from the 18th and 19th centuries.

The old town of Chełmno was added to the list of historical monuments in Poland in 2015 and is part of the Street of European Brick Gothic .

Church of St. Peter and Paul

Attic at the Cywiński house

Chełmno has had a town partnership with Hann since 1992 . Münden , Lower Saxony .