The terms gable and eaves describe the orientation of a building in relation to an opening street or a square . The terms are in the architecture and in the preservation of monuments and urban planning used to building or its urban situation delineate and to type. A gable permanent home is in short form and gabled house called a traufständiges house according Traufenhaus or Traufhaus . Corner buildings are usually gable-free with respect to one street and eaves with respect to the other street. 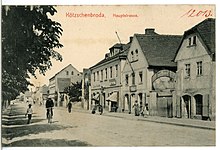 Eaves, mostly double-width buildings on the main market in Bautzen

In the case of gable-independent construction, the gable of a building faces the street; the roof ridge is perpendicular to this. A building oriented in this way is also known as a “gable house”. In this context, a "gable roof" is a gable roof or a half-hip roof whose gable is directed towards the front of the building. The opposite term is the eaves construction. Here is the eaves of a building on or parallel to the street; the ridge also runs parallel to the street. There was often an eaves lane between two neighboring gabled houses, but usually not between eaves-facing houses or with mixed development.

The terms do not make a statement about the development of the building in the sense of where the house entrance is now. Gable-employed or traufständige building, additional dormers or lucarnes with its own first have, which is perpendicular to the ridge of the main roof. The ridge direction of the main roof is decisive. The terms are only used if a dominant roof ridge can be recognized, i.e. not in the case of complex roof landscapes composed of individual shapes, tent roofs or flat roofs.

The gable-independent construction is typical of the central European street scenes of the Middle Ages and the early modern period, whereby in some cases great importance was attached to the decorative design of the front gable, which extends high above the ridge. In addition, this also applies to many Anger villages, for example those founded in Franconia, where the residential buildings of the Dreiseithof are facing the Anger gable, while the barn is at the rear of the eaves.

In the 17th and 18th centuries, the consolidation of properties and the subsequent renovations and additions to convert narrow gable-side to wider eaves-side houses and thus the loss of the characteristic saw-shaped profile of medieval towns occurred widespread .