from Wikipedia, the free encyclopedia
This is the spotted version , flagged on April 8, 2020 . There is 1 pending change that has yet to be viewed.

View from the Czantoria Wielka

Roundabout in the center 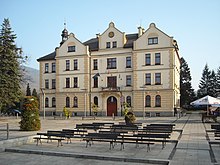 Ustroń [ ˈustrɔɲ ] ( German Ustron ) is a city in Poland in the southern part of the Silesian Voivodeship in the powiat Cieszyński .

It is located in the Silesian Beskids on the upper Vistula , which rises about 20 kilometers southeast of the city.

The city is a health resort and a center of winter sports as well as Lutherans in Poland.

Ustroń is located in the middle of the Silesian Beskids at the foot of the Równica in the east and the Czantoria Wielka in the west. The center is more than 500 meters below the summit. The neighboring municipalities are Brenna in the east, Wisła in the south, Goleszów and Skoczów in the north and the Czech Republic in the west. 15 km west of Ustroń is the Polish- Czech border town of Cieszyn / Český Těšín with its border crossing. Ustroń is located 20 km southwest of the city of Bielsko-Biała .

The municipality goes up to approx. 1000 m in the summit of the Wielka Czantoria.

The villagers first settled in the Lower Ustroń area . After 1500, the Dukes of Teschen expanded the settlement area upstream and the village of Ober Ustroń was created, later the Ustroń mountain pasture was built even further upstream . In 1526 both villages came to the Kingdom of Bohemia as a fief . The last Piast Duchess, Elisabeth Lukretia , bought large parts of Ustroń in the 1630s after the Protestant town was burned down by Habsburg soldiers in the Thirty Years' War in 1621. The residents fled to the mountains, where they specialized in alpine farming.

In 1738, Duke Franz Stephan von Lothringen acquired the village of Nieder Ustron in addition to his chamber goods in Teschen and united the villages. Ustron covered an area of ​​43.5 km² and, like Teschen, was a Protestant place. Immediately after the tolerance patent issued by Emperor Joseph II in 1781, a Protestant parish was formed.

After the discovery of an iron ore deposit around the middle of the 18th century, the landlord, Duke Albert von Sachsen-Teschen , had a blast furnace and iron hammer built in Ustron . Ustron became a center of the iron industry. In addition to the bell foundry founded in 1815, a rolling mill was built in 1846 . In the period that followed, several machine-builders settled there. Ludwig Hohenegger has been in charge of the archducal mines and smelters in Ustron since 1839 . The heyday of the industrial community of Ustron, where the first European steam plow was manufactured, soon passed. The remote location in the upper Vistula valley in the Beskydy mountains became a disadvantage of the location. In 1872 almost all businesses began to migrate. When Ustron finally found a connection to the railway network in 1888 with a branch line of the Kaiser-Ferdinand-Nordbahn between Teschen and Skotschau , this development could not be reversed.

As an alternative to industry, the municipality then expanded the bathing business. Ustron has been known for its whey cures since the 17th century, and in the 18th century a mud bath and a slag bath were added. Ustron became a seaside resort in the Beskid Mountains and had been an Austrian health resort since 1882.

Since 1954 Ustroń had the status of a town-like settlement, in 1956 it was granted town charter . After Ustroń had been a health resort since 1967, the city received official recognition as a Polish health resort in 1972 .

In the building of the former hut administration there is now a hut museum.

The Silesian Gorals keep their customs, costumes, way of life and architecture to this day. In addition, the Protestant faith ( Evangelical Augsburg Church in Poland ) is still of great importance in Ustroń today . Ustroń has one Lutheran parish, six Catholic parishes and seven other parishes of minor Protestant faiths. Evangelical Christians are mostly descendants of US emigrants who came back to Ustroń at the beginning of the 20th century.

Droga wojewódzka 941 provincial road runs through Ustroń in a north-south direction. It begins in the south at Istebna and leads via Wisła and Ustroń to Harbutowice , where it connects to the Polish motorway and expressway network , specifically the S52 and the DK81 .

The nearest airports are John Paul II Airport near Krakow and Katowice Airport .

The railway line No. 191 connects Wisła via Ustroń with Goleszów and from there on with Katowice and the other cities of Upper Silesia. There are Ustroń, Ustroń Zdrój and Ustroń Polana train stations.

There are three larger ski areas with seven ski lifts and approx. 7 km of ski slopes in the Ustroń municipality .

A chair lift leads from Ustroń to the lower summit of the Czantoria Wielka .

There are numerous marked walking paths within the spa park.

There are two mountain huts on Równica :

On the western slope of the Równica there is a zoo in the forest. There are also several adventure parks in the woods around the city center.

Ustron was the place of activity of the Protestant theologian Carl Friedrich Kotschy , who was pastor here from 1810 until his death in 1856. Kotschy was also a well-known botanist who described the flora of the Beskids.

Parishes in the powiat Cieszyński