About 5,000 people live on the island. These are mostly descendants of black African slaves. English is spoken.

Bequia is about 14 km south of the main island of St. Vincent and about as far northwest of Mustique . It belongs to the Grenadines , which in turn belongs to the Leeward Islands and thus to the Lesser Antilles . It lies between the Caribbean and the Atlantic .

The main town is Port Elizabeth (839 inhabitants) on Admiralty Bay on the west side of the island. Other villages include Paget Farm , Lower Bay , La Pompe , Hamilton and Derrick . The highest elevation ( Pleasant Top ) is 268 m.

Bequia has a small airport with regional flights, including Barbados and St. Lucia .

A ferry runs regularly between the capital Port Elizabeth and the capital of St. Vincent, Kingstown , as well as the other inhabited islands of the Grenadines.

On the island, minibuses operate as a kind of bus service between Port Elizabeth and the places on the southern part of the island, which stop at any point for a small fee.

Port Elizabeth is a popular port for yachts and the starting point for sailing trips to the islands of the Grenadines. Most of the hotels and restaurants as well as shops with everything sailors need can be found here - from groceries to nautical charts and boat accessories.

On the other side of the island, Friendship Bay offers quiet hotels, bathing facilities, and a diving school . 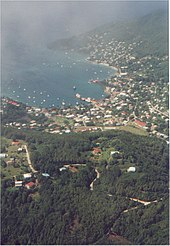 Whaling has been an important part of the local economy from the 1870s until well into the 20th century . Under the International Convention on the Regulation of Whaling , residents are officially allowed to catch a limited number of humpback whales in the traditional way, with harpoons from small boats and for local consumption only. Four whales per year were allowed for the years 2003–2007. These numbers have never been reached in the last few years: In the 1990s a total of nine humpback whales were killed, in the years 2000 to 2002 a total of four.

With the last whaler, Athneal Ollivierre, the tradition may have died. There is still the whaling museum built by Ollivierre and the landing site on the small offshore island of Petit Nevis . Due to this tradition, a whale can be found on the island's unofficial flag.