The Caribbean Sea is a tributary of the Atlantic Ocean . Together with the northwestern Gulf of Mexico , it forms the American Mediterranean . On its northern and eastern edge are the West Indies . Christopher Columbus first came to the Caribbean Sea on his second voyage (1493–1496).

As Caribbean the whole region is called - the Caribbean Sea, which lies in it islands and archipelagos and coastal areas. Parts of the Gulf of Mexico are also often considered to be part of it.

The Caribbean Sea is bounded in the north by the Greater Antilles . The western end of Cuba forms the border with the Gulf of Mexico, the Yucatán Strait connects the two waters. In the west are the countries of Central America , in the south Colombia and Venezuela . In the east, the arc of the Lesser Antilles forms the border with the open Atlantic.

In the up to 7,680 m deep Cayman Rifts between Jamaica and the Cayman Islands there are the world's deepest submarine volcanoes . The islands in the Caribbean Sea are mostly of volcanic origin, with some smaller islands being the remains of coral reefs . 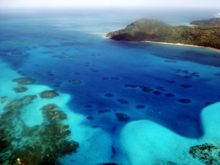 Due to the tropical location of the Caribbean Sea, the water is warm from around 20 to just over 30 ° C, depending on the season .

The Caribbean Sea is a central area for many hurricanes within the Western Hemisphere.

A number of low pressure systems form off the west coast of Africa , and most of them develop into tropical storms over the Atlantic. Such a storm can develop over the warm water (at least 26.5 ° C ) into a tropical cyclone with a wind speed of more than 118 km / h (64 knots ), which is then called a hurricane in the Caribbean . The Caribbean hurricane season runs from June to December, with August and September having the most storms. On average, nine tropical storms form each year, five of which are hurricane strength.

The annual hurricanes pose an enormous threat to the islands of the Caribbean Sea because of their extremely destructive power. Coral reefs can be damaged or even destroyed by violent waves if a hurricane dumps sand or mud on the reef. When this happens, the organisms are suffocated, the reef dies and eventually breaks apart.