Glacial valleys are the name given to broad valleys in Central Europe , which were formed in the ice ages or in the individual stages of an ice age on the edge of the Scandinavian inland ice or the alpine glaciation and were created by the more or less runoff of the melt water parallel to the ice edge . They belong to the glacial series . 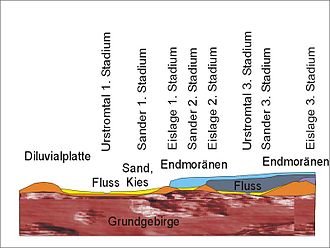 Section through a glacial valley

What is important in the formation of the glacial valleys is the general downward slope of the landscape in the north German lowlands and in Poland from south to north . The inland ice coming from Scandinavia pushed forward against a sloping terrain. The meltwater could only flow a short distance on the Sandern to the south and then looked for a path parallel to the edge of the ice in the direction of the North Sea basin. The area of ​​the North Sea was dry terrain at that time due to the significantly lower sea level.

Glacial valleys have an extensive, table-level valley floor that is between 1.5 km and 20 km wide. The valley slopes, however, are only a few to a few dozen meters high. The bottom and the edges of a glacial valley can be changed significantly by recent processes, in particular by the thawing of blocks of dead ice or the blowing up of dunes . In the post-ice age , many glacial valleys are muddy due to their low location and the associated high groundwater level .

In Central Europe there are several glacial valleys from different periods.

Since the slope of the landscape in North America and on the Russian table faces south, glacial valleys did not form there during the Ice Age. The Mississippi River and its tributaries have carried away the meltwaters of the North American ice sheet. In Eastern Europe, the meltwater flowed off via the river basins of the Dnepr , Don and Volga .

Glacial valleys, whether sandy or muddy, represented considerable obstacles to traffic in the Middle Ages. Therefore, the trade routes were bundled at narrow points at which the valley could be crossed relatively easily. The bottlenecks were a preferred place for city foundations and castles. Examples in Brandenburg are Berlin , Fürstenwalde , Luckenwalde and Baruth / Mark as well as in Lower Saxony Vorsfelde and Wolfsburg Castle .

Wellheim dry valley between the Danube and Altmühl , from which in the Old Pleistocene .