The Thielpark in Berlin-Dahlem is part of several glacial channels in southwest Berlin, created during the Vistula Ice Age

Glacial channels tend to arise when the inland ice , as for example during the Pleistocene in northern Germany, pushes up against sloping terrain, which hinders normal drainage, as is the case with valley glaciers. The meltwater that accumulates on the ice, especially in the Ice Age summer, finds its way relatively quickly to the glacier base via pipe systems and crevices. Following the pressure gradient, it flows towards the edge of the ice and quickly merges into larger meltwater flows under the ice. Since water continues to flow in from the glacier surface, the water flowing under the ice is usually under high pressure and can therefore also flow uphill (system of communicating pipes ). Because of the pressure flow, the water can reach considerable speeds and have a strong erosive effect on the subsoil. If the subsoil consists of unconsolidated sediments , as in northern Germany , for example , a significant amount of material can be removed within a short period of time. Since the flow of meltwater tends to zero in winter, the channel closes as glacier ice is pressed into the channel from above. These blocks of ice often remain as dead ice even after the glacier has melted and thus protect the channel from spilling, for example from meltwater. After the dead ice has thawed, the typical channel is created.

Glacial channels are elongated hollow shapes. They are between one and 50 km long. The width varies between a few dozen and several hundred meters (max. Up to 2 km with bundled channels). Some of the grooves are reminiscent of meanders in their course . The depth of the channel in the landscape also fluctuates significantly and is between a few meters and significantly more than 50 m (e.g. the channel of the Werbellinsee ). In southwest Mecklenburg, buried channels with a depth of almost 500 m are known. Depending on the groundwater level, the bottom of the channel is dry, muddy or filled with rivers and lakes. Since the ice in northern Germany mostly came from the north, most of the glacial channels are also oriented from north to south.

Distribution of gullies and channel lakes

Glacial channels visible on the surface of the earth are a widespread phenomenon in northern Central Europe and Denmark, which occurs in the young moraine region , the most recent glaciation area, the Vistula Ice Age. The numerous elongated channel lakes in particular give them a special scenic charm. The channel lakes are elongated and often deep.

But also in the geological subsurface many glacial channels from the older Ice Ages could be detected by drilling or in the lignite opencast mines of the Lausitz , which are completely buried and no longer detectable on the surface.

In the foothills of the Alps, however, there are no (or only a few) glacial channels. Since the Alpine foothills are sloping to the north, i.e. in the direction of movement of the ice, the glaciers drained there without the formation of glacial channels. 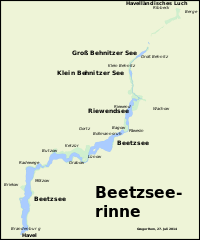 The Beetzseerinne in the western Havelland extends over a length of about 33 kilometers from northeast to southwest. It can be traced from the Havelländisches Luch to the Havel in the city of Brandenburg. Subsequently, several wetlands and typical, elongated lakes formed in it, of which the eponymous Beetzsee is the most important. The Bohnenland-Görden-Rinne runs parallel to the southern area of ​​the Beetzseerinne, about four and a half kilometers to the west . In it lie the Bohnenländer See and the Gördensee . It has a length of about seven and a half kilometers. Further examples are: