This article deals with the inlet of the Baltic Sea Schlei , further terms and persons with the name Schlei see: Schlei (disambiguation)

The Schlei ( Low German Slie or Schlie , Danish Slien or without Article Sli ) is an arm of the Baltic Sea in Schleswig-Holstein , which separates the two Schleswig landscapes of fishing and swans .

The classification of the Schlei as a fjord is controversial due to its history. According to popular belief, it is a glacial channel , but not a fjord . Most of it consists of brackish water . 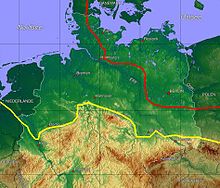 The name Schlei (Old Danish Slæ , Old Saxon Slia ) meaning "muddy water" or "water with slimy water plants" originally only referred to the inner Schleib basin of the two latitudes ( large and small width , Danish Lille and Store Bredning ). It is possible that the current landscape name, fishing, used to refer to the loop.

The Schlei was formed during the Vistula Ice Age 115,000 to 11,000 years ago by the ice masses advancing from Scandinavia . Its classification as a fjord is controversial, because some people believe that it was not created by glacier erosion of a glacier tongue like the Flensburg or Kiel fjords , but merely served as a drainage for meltwater. The Schlei was therefore not carved out by glacier tongues within the inland ice, but was created by subglacial glacifluvial erosion caused by melt water, as a so-called tunnel valley. Such glacial channels are also fjords, but only in a broader sense. However, the Schlei is by no means a fjord (a glacial hollow in the mountains), as is often wrongly claimed in tourism jargon. Due to the low side flanks, geomorphologically it cannot be called fjord-like. In Danish and in South Jutian , the word fjord stands for a fjord as well as a fjord and is etymologically related to the German word fjord . 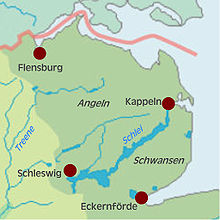 The loop forms the border between fishing and swans

The loop extends with a length of 42 km from Schleimünde via Kappeln and Arnis to the city of Schleswig through the Schleswig-Holstein hill country and separates the parts of fishing and Schwansen . It has an average width of 1.3 km and an average depth of 3 m. This results in a water surface of 54.6 km² and a volume of 163.8 million m³. The water of the Schlei is brackish water , the salt content continues to decrease from Schleimünde (1.8%) to Schleswig (0.8-0.4%). The main tributary of the Schlei is the Füsinger Au (previously also Loiter Au ), which flows into the Schlei at Winningmay .

The Burgsee (with Gottorf Castle on the Castle Island) was once the furthest inland part of the Schlei, but was separated from the Schlei in 1582 by Duke Adolf I by the Gottorfer Damm, which has now been widened to around 28 meters and is almost 100 meters long.

In front of Schleswig lies the 1.8 hectare seagull island , and a little further east in the Große Breite the protected island of Hestholm . Other islands in the Schlei are Kieholm and Flintholm ; today's Lotseninsel peninsula is located near Schleimünde. There are many natural bays on the Schlei. Lake-like extensions, so-called Noore , have formed to the left and right , which are connected to the Schlei (see also Ornumer Noor , Haddebyer Noor , Holmer Noor and Selker Noor ).

A special biological feature is the barnacle , a fish that is related to trout and whitefish . The last grinding millers have kept their centuries-old tradition in Holm in Schleswig, while other locations such as Kappeln , Arnis , Missunde and Sieseby have lost their importance. Until around a hundred years ago, fishing on the Schlei was an important industry. Mainly herring , eel , perch , bream and other white fish were caught here. To date there are (few) professional fishermen on the Schlei.

The region around the Schlei has been recognized as the Schlei Nature Park since October 2008 .

Schlei from Schleswig Holm seen from

The Schlei is a popular sailing area. The Schleiregion, which is partly characterized by tourism, is an important local recreation area for the nearby state capital Kiel and the city of Hamburg , especially since the construction of the A7 motorway .

At the exit of the Schlei to the open Baltic Sea is the uninhabited pilot island Schleimünde , with a small port of refuge for yachts, the pub Giftbude and a lighthouse at the top.

Since 2007, the Wikinger-Friesen-Weg theme cycle route has been connecting two sections of the route north and south of the Schlei with cultural and historically significant points. The route follows the former trade route of the Danish Vikings via Schlei, Treene and Eider to the North Sea.

For better tourist marketing, the loop is sometimes referred to as the "Ostsee fjord " or "Ostseefjordschlei".

Representation of the Schlei around 1600

In the Middle Ages the Schlei was very important as a trade route in the Baltic Sea region. The overland route from Schleswig to the Treene , a tributary of the Eider , was only 16 kilometers. At this point there was therefore a favorable point for exchanging goods between the North Sea and the Baltic Sea .

Already in 1075 Adam von Bremen referred to Haithabu , the Viking settlement near Schleswig, destroyed in 1066 , as a sea port (Latin portus maritimus ) from which ships were sent to Sweden and Greece. Then Schleswig, located on the opposite bank, took over this role, but without attaining Haithabu's importance. When the ships got bigger towards the end of the 14th century (e.g. the Hansekogge ), the Schlei was also too shallow, and Schleswig too far from the open Baltic Sea. As a result, the Schlei gradually lost its importance as a shipping trade route. Schleswig finally lost its status as a trading metropolis to Lübeck and Flensburg , but remained a bishopric.

Even today, the loop between Schleimünde and Kappeln is occasionally still used as a transport route for commercial shipping.

There are numerous cultural, historical and archaeological sites in the vicinity of the Schlei. The Viking settlements Haithabu and Füsing should be mentioned among others . The place Kosel (historically Koslev ) goes back to a Viking Age settlement. Several rune stones , the rune stones of Haithabu, were found in the immediate vicinity of Haithabu . In the main town of Schleswig, the early modern Gottorf Castle and the medieval St. John's Monastery should be mentioned. From the 17th century onwards, the court's economic institutions settled within sight of the palace, which laid the foundation stone for today's Friedrichsberg district of Schleswig . East of the city in front of the Reesholm peninsula, not far from Füsing, there was a Viking Age lake barrage attributed to the Danewerk . Both Haithabu and the Danewerk facilities have been nominated for UNESCO World Heritage Sites along with other Viking Age sites in Northern Europe as part of the transnational project “Viking Age Sites in Northern Europe” . Other Viking Age and Early Medieval sites are the former castle on Seagull Island in front of Schleswig and the now demolished castle complex at Bohnert ( Königsburg ) and across from Arnis ( Schwonsburg ). The former village of Rinkenis was also located near the Schwonsburg. Before Schleimünde was the end of the Middle Ages, the village of Mynnaesby or Mindesby and the local castle Oldenburg / Gammelborg. In 2000, the remains of a 12th-century freighter were discovered in front of the town of Karschau , which confirmed the role of the Schlei as a long-distance trade route in the early and high Middle Ages. In Missunde on the south bank of the Schlei there is a large stone grave from the Neolithic Age, the passage grave of Missunde . The many Romanesque churches such as in Ulsnis are characteristic of the landscape on both sides of the Schlei .

With the beginning of the modern era , the manor rule became the predominant form of economy in Schwansen, located south of the Schlei, of which numerous goods in this region testify to this day. In contrast to Schwansen, the peasants in large parts of Angling were exempted from lordship and serfdom as free peasants . The larger estates include the noble estates Louisenlund and Buckhagen , Gut Saxtorf near Rieseby and the former Gut Gereby with the Carlsburg manor .