The Flensburg Peace Hill , an unchanged large stone grave in which the soil was not removed. (2014) 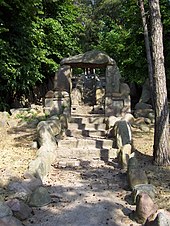 The Ulanendenkmal in Demmin , a memorial to the destruction of barrows

The Esse War Memorial in France

Chamber of the large stone grave near Klein Görnow

The popular name “Hünengrab” , which is widespread in northern Germany, is derived from “ Hüne ”, which can be traced back to the Middle High German “hiune” and the Low German “hûne” meaning “giant”. Even in the 17th century, there was a widespread opinion in literature that these were "graves for giants".

Hoops Reallexikon defines megalithic graves : “M., also known as stone graves, are the oldest grave structures that we can find evidence of in northern Germany and Scandinavia. They are built from large northern boulder blocks and consist entirely of a stone chamber that is covered by a hill supported by a stone wall. ” This statement is incomplete, as monuments of this type also occur in the Netherlands, Poland, central and southern Germany, and not only Boulder blocks were used.

During his excavations in the Altmark around 1820, Johann Friedrich Danneil (1783–1868) demarcated the barrows, which were then called cone tombs, from the barrows. Georg Christian Friedrich Lisch (1801–1883), also in the first half of the 19th century, distinguished the “time of the barrows” from the subsequent “time of the cone graves” with grave goods made of bronze based on the grave finds . However, since the term conical grave has largely been abandoned today, the linguistically similar sound of megalithic tomb and barrow often causes confusion among laypeople. Often the "barrows" are confused with the barrows found in Central and Northern Europe, which consist almost exclusively of earth and mostly date from the Bronze or Iron Ages. Even official maps sometimes mistakenly refer to them as megalithic tombs.

Because of the acidic soils, bones in the large stone graves as well as in the flat graves of the funnel cup culture have seldom been preserved. At least two corpse shadows had been preserved in the Oldendorf II grave . The body lay on its back with legs drawn up. Overall, additions are sparse.

The main area of ​​distribution of late Neolithic large stone graves is in southern Scandinavia and the northern German lowlands, from the Vistula to the eastern Netherlands . These chambers, which today are often only preserved as stone constructions or collapsed piles of stones (see pictures), were originally mostly covered with earth and lay under round or elongated mounds of earth. By type of construction, they are divided into dolmens , passage graves , stone boxes , gallery graves and chamberless giant beds . A large number of megalithic systems are used in the funnel beaker culture. In the western group there are mainly T-shaped passage graves with a short passage. The hills and their borders are oval or kidney-shaped. In the northern group, on the other hand, systems with long corridors and round hills were built.

In Germany, the number of large stone graves in 1939 (within the limits at that time) was given as 900. The majority of archaeologists date the development of the Nordic variant of the facilities to the Middle Neolithic between around 3500 and 2800 BC. BC , with a tendency to date even earlier.

Ideological and religious reasons played a minor role, although the stones were also smashed for church buildings. As a result of the Enlightenment that began in the 17th century, but especially due to industrialization in the 19th century, many of the monuments were destroyed. The facilities were also destroyed where they were in the way of the farmers when plowing their fields, but most of the stones were removed for the construction of ports and roads. Today there are still around 900 more or less severely damaged systems in Germany. According to estimates, this is at most 15% of the former megalithic structures. In the district of Uelzen, all but 17 (7.75%) of 219 plants were partially destroyed in 1846. The economic constraints, together with the thinking of the time, caused the destruction of both graves and boulders . An impressive example of politically motivated destruction is the Ulanendenkmal in Demmin, which was built from boulders from the surrounding megalithic complexes.

Neolithic monuments are an expression of the culture and ideology of Neolithic societies. Their origin and function are considered to be the hallmarks of social development.

The Dane JJA Worsaae (1821–1885) occasionally discovered human bones when excavating large stone graves in Jutland , whereupon he classified the facilities as graves, whereas previously they were mostly considered places of worship and sacrifice. In the shallow graves of the funnel beaker culture, the bones are mostly in an anatomical bond, while this is not the case in the large stone grave horizons of the funnel beaker culture, even in undisturbed structures.

Some researchers are discussing the question of whether the facilities are graves at all. No human remains have been found in many, especially when the soil is acidic. In most of the others, the bones of the funnel cup people were incomplete and rarely in the anatomical association. Since most of the chambers could be re-entered through entrances, it was initially assumed that they were hereditary burial places of the peasant families, in which several generations were buried. Alone or lying in groups, they reflected the way of living in individual courtyards or courtyard groups. In contrast to this is the theory that the construction of the facilities for socially distinguished people assumes. Further burials in the chambers are z. B. Co-buried servants or spouses who accompanied their master into the hereafter. This theory, which was developed on the basis of findings from north-eastern Lower Saxony, leads to the observation that the findings point to an occupancy period that is too short for hereditary burials (around 100 years). Not only the question of the social position of the buried (including children) in the facilities cannot be answered with the current state of research, one is also on uncertain ground with regard to their function. So doubts were raised about their purpose as graves in the real sense. In the past, the disorder in the chambers was explained as the result of older burials being pushed together when a new one was brought in, today one wonders why one does not come across the last burial in the form of a coherent skeleton when excavating chambers that have remained undisturbed (see Grave B of the Seven Stone Houses ). Based on these and other observations, an opinion already held in Sweden and Germany in the 19th century is revived, according to which the complex could have been ossuaries in which only the skeletonized bones of the deceased were deposited. Hints

and similar observations suggest that the megalithic complexes were far more involved in the area of ​​cultic acts and the scene of a differentiated ritual than is the case with tombs. The representative character of the complex, which was emphasized by long or round borders, cannot be overlooked.

The construction with muscle power, inclined planes and levers is a technical masterpiece of the Neolithic people. The performance has been calculated using an experimental model calculation using the example of a large stone grave in Großenkneten near Oldenburg ; this resulted in the following working hours:

The total output is therefore 109,050 working hours. With this, a hundred people could erect a large stone grave in 110 days in a ten-hour day. Most of the other plants were much smaller.

The prehistorian Johannes Müller calculated 110,000 working hours for the construction of the giant bed I of the Kleinenknetener stones with the dimensions of 50 × 7 meters . 100 people could have erected it in 3.5 months on a ten-hour day.