The Cornish language (also Cornish ; New Cornish : Kernewek , Kernowek or Kernuak ) is a Celtic language closely related to Welsh and Breton , which was spoken in Cornwall until the late 18th century and revived in the 20th century. The name of the language Kernowek or Kernewek (britann. Kornobika ) is derived, like the country name, from the late antique inhabitants of Cornwall, the Cornovii. 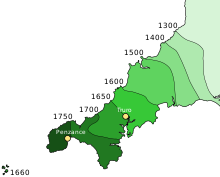 The last known native speaker of Cornish, Dolly Pentreath from Mousehole (Corn. Porthenys), died in 1777. For a long time she was considered “the last speaker” because she appeared in a travelogue of the English antiquarian Daines Barrington. He had looked for "the last" speakers of Cornish, had been referred to them, and when asked whether she still knew her mother tongue, she showered him with Cornish swearwords. However, Dolly Pentreath is the last known native speaker of traditional Cornish; she herself stated that she only learned English at the age of 12.

In 1891 John Davey died, whose relatives claimed he was the last person to be fluent in Cornish. That must not have been true; We owe Davey, however, the transmission of some corrupted fragments of Late Cornish. However, individual elements of the language had been used in some professions for a much longer period of time, for example the custom of counting caught fish in Cornish.

Today's "Neo-Cornish" is a reconstruction of the extinct language with the help of traditions and written evidence, from which a large part of the Neo-Cornish lexicon (70%) was reconstructed. Since the surviving Middle Cornish corpus is much more extensive than that of the Late Cornish, most of the words come from it. The traditional vocabulary also includes not only the British hereditary words, but also around ten percent loanwords from Vulgar Latin and English. A significant part (25%) of the Neo-Cornish vocabulary was borrowed from the related languages Cymrian and Breton or constructed accordingly. Five percent come from English; there are also Cornish borrowings from international terms v. a. Latin and Greek origin.

The language is nowhere near as richly documented as the biblical Hebrew , which, unlike Cornish, never went completely out of circulation. Purists among Celtologists and linguists are critical of today's Cornish as they consider it to be inauthentic, and the same can be said about today's Israeli Ivrith . A language movement is currently trying to revive it, but in the 1980s it split up into several competing groups using different orthographies (see below). A study commissioned by the British government (see below) found around 250 people who were fluent in the language, and around 3,000 more (<0.7% of the Cornwall population), some of them only acquired minimal basic knowledge. Since the number of speakers was never recorded before the study mentioned, older literature mostly contains imaginary assumptions that clearly reflect the wishful thinking of the nationalists. The number of families in which children with a Cornish mother tongue grow up was 13 in 2000.

A massive problem with the language movement is its fragmentation: A study commissioned by the British government (MacKinnon Report 2000) found around 250 fluent speakers divided into three warring groups, each using its own variant of Neo Cornish. The following variants (and orthographies) are currently in use:

Since May 2008 the Cornish Language Partnership has been using a newly developed standard orthography (FSS) for official documents and in school lessons, see below.

Portions of this article appear since 2008 is out of date to be .
Please help to research and insert the missing information .

Apart from bilingual place and street signs, there are currently hardly any official efforts to spread this language. However, Cornish has now been recognized as a minority language by the British government and will increasingly be taught in schools from 2008.

Cornish can be taught in schools on a voluntary basis, provided that a suitable teacher can be found. In addition, official exams can be written in this language.

In the media, Kornisch is only represented by a five-minute weekly radio program. However, there is the web radio “Radio of the Cornish Language Community”, which broadcasts a half-hour magazine with interviews and music and a news program per week.

Small speaking communities exist among descendants of Cornish emigrants in London , Australia and the USA .

Important stages of the resuscitation

Around 600 the language areas of Cornish and Welsh were spatially separated by the Anglo-Saxon advance to the west. The first stage of development in the history of Cornish as a separate language, which is set to around 900, is known as Early Cornish .

The period from 900 to 1200 is known as Old Cornish . It is mainly documented by glosses and the Vocabularium Cornicum , a Latin-Old Cornish dictionary.

The Middle Cornish period is set from 1200 to approx. 1600. During this time, the Cornish language border began to rapidly retreat to the west, but it was the most literarily productive phase in which the highest number of speakers can be assumed. Ken George puts this at a maximum of around 35,000 people in the late Middle Ages - the country was previously too sparsely populated, after that more and more families changed their language, and English began to displace Cornish. The most important primary sources for Middle Cornish are dramas, almost exclusively mystery plays , which come from the environment of a specific school - the College of Glasney (the Cornish titles marked with an asterisk in the following paragraph are in the FSS standard orthography):

After the Reformation, the Glasney College was closed and the tradition of the Mystery Plays fell into disrepair. In the 17th century, the language area only comprised the westernmost part of Cornwall, and many sources from this period show typical signs of decline in lexicon, phonology and morphology for half-speakers (people who have not fully learned the language). This phase of the extinction of the language is known as the Late Cornish Period. In addition to the low level of competence of many speakers, Late Cornish is characterized by the change in morphology towards analytical formations (conjugated prepositions are replaced by prepositions plus personal pronouns) and characteristic changes in the phonological system. Most noticeable are the pre-occluded nasal consonants:

The orthographic tradition of Middle Cornish was no longer passed on, which is why the late Cornish scribes made do with an auxiliary English spelling. The Welsh linguist Edward Lhuyd , who toured Cornwall in the early 18th century, designed a phonetic transcription for Late Cornish, some of which was taken up by some enthusiasts. This group of authors left late Cornish texts from various genres - but mostly prose. This means that the language level and vocabulary of the Late Cornish texts differ more from those of the Middle Cornish sources than would be the case purely through phenomena of language change, since most of the Late Cornish authors were not native speakers and had only an imperfect command of Cornish. This is important for the various Neo-Cornish reconstruction models, as they are based on different language levels and only the Kernowek Unys Amendys attempts to include all documented phases in the history of Cornish equally.

The last native speakers who had a perfect command of the language probably died before 1800, the last half-speakers in the course of the 19th century. The last known adult monoglote spokeswoman, Cheston Marchant, died in 1676.

The different variants of the revived Cornish spoken today are summarized under the terms Neukornisch or Neokornisch (see above). All variants of Neo-Cornish, with the exception of Nowedga , are morphologically based primarily on Middle- Cornish . To replace missing vocabulary - because it has not been handed down - or to name new concepts, different methods are used, depending on the variant: Purists orientate themselves on Welsh and Breton, while pragmatists tend to borrow words from English (which the speakers of traditional Cornish also did to have).

The division into different groups is less problematic, however, as it may at first appear that mutual understanding is very possible in the spoken language, which is not least due to the fact that all speakers today speak Cornish with a strong English accent: [i :, iw, ju:] instead of / y: / and [e :, ej] instead of / ø: / are also common in the variants that are based on the Middle Cornish and actually use rounded vowels. So there are some arguments in favor of not speaking of different revived languages ​​but of dialects or sociolects of the same language. In the meantime, tendencies towards harmonization can also be observed, with the Middle Cornish form being described as “literary” and the corresponding Late Cornish form as “colloquial”, and both being taught side by side. This tendency is followed by the first German-language textbook of the revived Cornish, Cornish - word for word by Daniel Ryan-Prohaska , which was published in 2006. In this book a Middle Cornish based orthography (UCR) is taught alongside a Late Cornish influenced Neo Cornish pronunciation.

The following illustration reproduces the system depicted in NJA Williams' English-Cornish dictionary (2000) and relates to Kernowek Unys Amendys (UCR). Regarding the actual phonetic realization of all variants in everyday life, it should be noted that the pronunciation of most neo-Cornish speakers has strong English interferences.

UCR does not know any Geminates, but Fortis variants [M, N, R, L] with the implementation [bm, dn, rh, lh] on the allophone level.

The UCR distinguishes between two vowel lengths (in the Kemmyn three: short, half-long, long or / V, V ', V: /). Unstressed short vowels are mostly realized as [ə], which also has phoneme status, especially in a number of suffixes and in clitics.

† extinct ; † revived ; (†) there were always at least second speakers