Płock ( ['pwɔʦk] ? / I ; German Plock , Plotzk or Plozk , 1941–1945 Schröttersburg ) is a city in Poland in the Masovian Voivodeship about 100 km northwest of Warsaw on the Vistula . The city has been closely connected with Mazovia since ancient times, was its capital and is still one of the most important cities in the voivodeship. Płock is the oldest city in Mazovia and one of the oldest in Poland.

The city was first mentioned in the 9th century. The town chapel was built in the middle of the 11th century. In 1075 the city became the seat of the diocese of Płock . In the years 1079 to 1138 Płock was also during the reign of Władysław I. Herman and Bolesław III. Wrymouth the capital of Poland. In 1144, under Bishop Alexander von Płock, the Płock Cathedral was completed and in 1180 the first school opened in the place. Around 1226, possibly even earlier, Płock was granted city rights.

In 1237 a document was issued confirming the German city law ( Magdeburg law ). The old town was expanded by a new part between the castle and town, which was previously owned by the church. In 1351 Płock, like all of Mazovia, became a fiefdom of the Polish state and its city rights were confirmed by Casimir the Great . Two years later the construction of a city wall began. In 1405 the hospital opened, which was donated by Aleksandra (sister of Władysław II Jagiełło and wife of Prince Ziemowit IV from Płock). 1435 was the city charter by Władysław III. changed or confirmed in Kulmer law . In 1495 it became the seat of a voivodeship ( Voivodeship Płock (until 1793) ). In 1526 epidemics broke out in the city and killed around 30 percent of the population, i.e. around 1,100 people. In 1545 a fire raged in the city. During the Second Northern War , the Swedes destroyed Płock, including the castle and the hospital, in 1657. In 1731 there was a landslide on the Vistula and parts of the city were washed away by the river.

After the second Polish partition , Płock and South Prussia fell to Prussia in 1793 .

From 1802 to 1804, the German romantic poet ETA Hoffmann stayed in the city because he had been transferred there to draw caricatures.

In 1807 it became part of the Grand Duchy of Warsaw . In 1811 the Trinity Church was converted into a theater. From 1815 the city was part of the Kingdom of Poland .

On September 23, 1831, the last meeting of the Sejm of the rebels of the Polish kingdom took place in the town hall. On May 15, 1863, Zygmunt Padlewski was executed on the Płock barracks square as one of the leaders of the January uprising . A monastery was built between 1911 and 1913 . During the Polish-Soviet War , the city was attacked by the Red Army on August 18 and 19, 1920 and was successfully defended. On April 10, 1921, Marshal Józef Piłsudski was honored with the medal for bravery.

In 1938 the construction of a railway bridge on the Kutno – Brodnica railway over the Vistula was completed, the Płock Radzi station on the line to Kutno had existed since 1922, the Płock station on the line to Sierpc since 1934. In 1939, the city became illegal after the invasion of Poland Part of the German Empire and renamed Schröttersburg in 1941 , after the former High President of East Prussia and West Prussia , Friedrich Leopold von Schrötter . It was the seat of the district of Schröttersburg . In March 1941, the local Jews were deported to concentration camps; by then they made up around a quarter of the population. Since the end of the Second World War , Płock has been part of Poland again.

In 1975 the city became the seat of a voivodeship again through a regional reform , but lost this status again in 1998. On June 7th and 8th 1991 Pope John Paul II stayed in Płock. 1999 , the closed "Petrochemia Plock SA" and CPN for Polish oil company Orlen SA together.

Płock - Castle of the Dukes of Mazovia 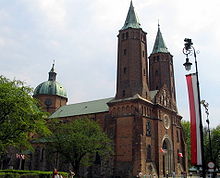 The Church of the Blessed Virgin Mary of Mazovia in Płock.

Płock is a center of the Polish petroleum industry. The oil company PKN Orlen has its headquarters in Płock and also operates the largest refinery in Poland there.

At the head of the city administration is a city ​​president who is directly elected by the population. Since 2010 this has been Andrzej Jacek Nowakowski ( PO ).

In the 2018 election, Nowakowski stood for the electoral alliance Koalicja Obywatelska from PO and Nowoczesna . The vote brought the following result:

Nowakowski was re-elected as city president in the first ballot.

The castle of the Dukes of Mazovia is a work of brick Gothic . On the bank of the Vistula is the Renaissance Cathedral of the Assumption , which was built between 1530 and 1563 and is the seat of the Bishop of Płock . It has been redesigned and expanded several times. The late Baroque St. John the Baptist Church is also located in the old town in the immediate vicinity of the diocesan seminary. Furthermore, the “Temple of Mercy and Love”, the cathedral of the Mariavites , a Christian denomination that split off from the Catholic Church in 1906, can be found in the city .