The Lesser Poland Voivodeship (Polish województwo małopolskie [ vɔjɛˈvut͡stfɔ mawɔˈpɔlskʲɛ ]) is one of the 16 voivodeships of the Republic of Poland . It encompasses the southern part of Poland around the city of Krakow and is enclosed from west to east by the Silesian , Świętokrzyskie and Subcarpathian Voivodeships . In the south Lesser Poland borders on Slovakia , with which it has shares in the Carpathian Mountains . The capital is Krakow. On April 29, 2019, the Voivodeship Parliament, the Sejmik, passed a resolution declaring the entire Voivodeship to be an “ LGBT-free zone ”. For this reason, the French region Center-Val de Loire terminated the partnership on February 24, 2020.

The three historical voivodeships of Lesser Poland Cracow , Lublin and Sandomierz until 1772 against the background of the modern administrative structure of Poland

The current voivodeship was formed with the administrative reform in 1999 from several small administrative units around the city of Krakow and is located in the area of ​​the historical Krakow Voivodeship, which also existed from 1945 to 1975.

The coat of arms is based on historical models and is as follows described : In a red gold died änderter gold-winning and gold reinforced silver eagle with golden clover stalks . 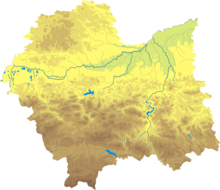 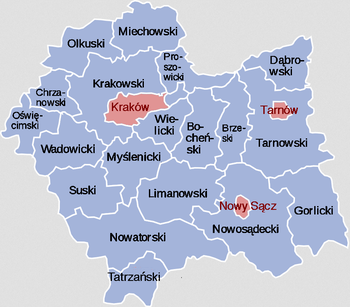 The Lesser Poland Voivodeship comprises a total of 19 rural powiate, to which a total of 182 municipalities ( Gmina ) belong.

The provincial capital Krakow is the second largest city in the country with around 770,000 inhabitants and by far the largest in the Lesser Poland Voivodeship.

With a value of 0.867, Lesser Poland ranks second among the 16 Voivodeships of Poland in the Human Development Index .

There are four industrial parks in the Lesser Poland region:

Lesser Poland is rich in natural resources. Be won:

The largest power plants are in Kraków, Skawina, Trzebina and Tarnów. 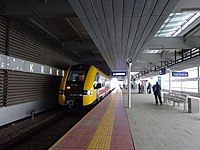 In Lesser Poland, important transport routes cross from west to east and from north to south.

Two European roads, one motorway and twelve expressways run through Lesser Poland. The main connection is the A4 motorway, which connects Lesser Poland with the Silesian Voivodeship in the west and the Subcarpathian Voivodeship in the east. The A4 also forms the western and southern bypass roads of Krakow . The S7 expressway connects Lesser Poland with the Świętokrzyskie Voivodeship in the north with Slovakia in the south. The S7 also forms the northern and eastern bypass roads of Kraków. Between Krakow and Zakopane , the S7 (in the southern part the S47) forms the Zakopianka panoramic road , which is currently being expanded to two lanes. The longest road tunnel in Poland is also being built on the Zakopianka near Chabówka .

In Lesser Poland there are 1,121 km of used railways. Regional traffic is operated by the Malopolska Railway Company, which owns forty trains made by Newag , Pesa and Kolzam . Krakow has direct train connections with all major cities in Poland as well as with Berlin, Prague, Bratislava, Budapest, Kiev and Odessa. There are 26 larger train stations in Lesser Poland, four of which are listed: Nowy Sącz , Rabka-Zdrój , Tarnów and Zakopane .

John Paul II Airport Kraków-Balice is the international airport in Lesser Poland. It is located in the town of Balice , approx. 11 km west of Krakow city center, directly on the A4 / E 40 motorway and the Balice-Krakow railway line. With a passenger volume of around 5 million passengers a year, it is the second largest airport in Poland after Frédéric Chopin Airport in Warsaw . The airport has around 100 direct connections to Europe, America, Africa and Asia.

Czarny Staw in the High Tatras

Three crowns in the Pienines

Babia Góra in the Beskids 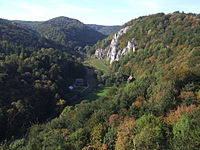 Ojców in the Kraków-Częstochowa Jura

There are five UNESCO World Heritage Sites and six national parks in the voivodeship.

The UNESCO World Heritage Sites are

The national parks are

The landscape parks are

One of the most famous people from Lesser Poland is Karol Wojtyła, who was Pope John Paul II head of the Catholic Church from 1978 to 2005 . He came from Wadowice near Cracow.