Wooden figure of Luther of Braunschweig in the Königsberg Cathedral

Grand Master's coat of arms of Luther of Braunschweig 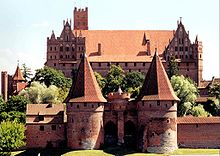 Luther of Braunschweig is mentioned for the first time as a knight of the order in East Prussia in 1295 and was evidently in the entourage of the landmaster until 1304 . Between 1308 and 1312 he was Komtur von Gollub , at that time one of the more important comers of the Kulmerland . In 1313 Luther was the house commander of the Marienburg and finally from 1314 to 1331 the highest Trappier of the Teutonic Order and thus also Commander of Christburg , a commandery in the Prussian settlement area. It stretched from the south along the banks of the Vistula and the coast of the Fresh Lagoon . Luther founded a few villages there and rearranged older settlements. In 1326 he founded the city of Gilgenburg . Christburg , Deutsch Eylau and Saalfeld received improved hand festivals through him . Under him, large areas were opened up in his commandery and later combined to form the new Kommende Osterode (1329). All these measures were carried out in close cooperation with the Cistercians .

Under Luther's leadership, the Christburger Chancellery became the best developed of the Teutonic Order Chancelleries, among other things, it was the first to change over to issuing documents no longer - as was customary until then - in Latin , but only in German . This happened over 20 years before the Grand Master's office.

Grand Master of the Teutonic Order

Luther of Braunschweig was elected Grand Master of the Teutonic Order on February 17, 1331. His predecessor Werner von Orselen had recently been murdered by a knight of the order.

As Grand Master, Luther continued to promote the settlement of the country, but did not travel much himself. He also promoted the veneration of St. Barbara , whose head was kept as a relic in the Alt-Kulm Teutonic Order Convent .

Thanks to Luther's support, the Königsberg Cathedral , the only cathedral that was located on the territory of the order, was completed in 1333. Luther was personally present at the consecration . The Marienburg was also expanded. B. the Anne Chapel, which later became the burial place of the Grand Masters. Luther himself was not buried there, but in the Königsberg Cathedral. His grave was preserved there until the Second World War .

Luther's tenure was negatively influenced by the military conflicts with Poland over possession of Pomerania, which had been ongoing since 1326 . After the Battle of Plowce on September 27, 1331, an armistice was signed the following year . In 1343 Poland finally recognized Pomerania as a property of the order.

Although Luther of Braunschweig did not take up the post of grand master at an advanced age, he is still considered one of the most important grand masters. In particular, he made a contribution to the further development and settlement of the country, to the building activity as well as to the promotion of religion and poetry.

Luther von Braunschweig's preference was for poetry and sacred music. Spiritual poetry in the religious state reached its climax under him. He commissioned a Daniel poem as well as the translation of the "Chronicon Terrae Prussiae" Peters von Dusburg by Nikolaus von Jeroschin . He is also known as a poet: unfortunately, his poetry about Saint Barbara is lost. Luther is also often ascribed a German adaptation of the biblical Book of Maccabees. However, this thesis is doubted by medieval Germanists.