This article deals with import in an economic sense, for inserting data into a computer see data exchange . 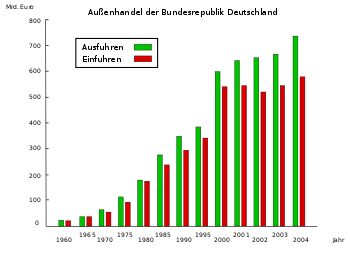 Import (also: import , Latin in [is due to the following "p" to the ] "in ... in," and Latin portare "bear, bring", "bring it to introduce") is the foreign trade of the cross-border purchase of goods or services from the countries and their delivery to the domestic . The opposite is export .

The basic forms of foreign trade are merchanting , import and export, whereby in the case of imports, the flows of goods flow from abroad to Germany and the flows of payments from Germany to abroad. The importing economic entities ( companies , private households , the state and its subdivisions such as public administration and state-owned companies ) are called importers and have a trade relationship with the foreign exporter . When importing is provided that the exporter to the importer because of the terms of delivery the goods / services (hereinafter goods) by delivery to the property transfers ( retention of title does not hurt) and the importer due to the terms of payment to the exporter the purchase price paid ( supplier credit / customer credit does not hurt ). The goods must be procured from abroad, although they are also imports in the same currency area (e.g. Germany / France). Imports are only present in the case of a complete transfer of ownership, so that rent , loan , lease or leasing represent an import of services at best.

Import goods primarily include raw materials , trading goods ( e.g. commodities ) or capital goods ( machines ). In the case of services, tourism abroad is considered to be import if, for example, a German goes on holiday abroad. The import of book money and capital is called capital import .

With regard to the processing stage, there are imports of raw materials or semi-finished products in the production economy for the purpose of further processing in Germany or imports of finished products in the trade ( wholesale or retail trade ). Imports place within the framework of the foreign trade financing instead because the importer in advance payments ( advance payment ) Payment train to train against surrender or existing payment terms to pay for the goods after delivery, while credit institutions must employ. Foreign trade financing supports this through import credit , document collection or international transfers . The import value is determined according to international customs at the national border, based on the CIF price . When calculating imports in Germany, the Federal Statistical Office uses statistics from general trade . The Deutsche Bundesbank supplements the foreign trade balance with the balance of primary income , the additions to trade in goods and the balance of current transfers to the current account .

If there is domestic demand , an import becomes necessary if the importing country does not produce the goods itself or in insufficient quantities or if the product quality / service quality or the prices are less favorable than with imports ( comparative cost advantage ). In the importing country, the import supplements the missing goods supply . Imports can therefore compensate for an undersupply , quality defects or price disadvantages in the importing country . Import- heavy countries can try to shift the external contribution in favor of the export quota with the help of an import substitution policy .

Accordingly, there is an import surplus as

The import also causes an increase in the supply of goods on the importing goods market . Since the domestic money supply decreases at the same time as the payment of imports , imports lead to an imbalance in money and goods markets, which, like foreign price increases, triggers inflation (“ imported inflation ”).

The foreign trade law known as legal concepts to imports and exports. According to Section 2 (10) AWG, “importer” is any natural or legal person or partnership who delivers goods from third countries to Germany or who has them delivered and who determines the delivery of the goods. Accordingly, import is the delivery of goods from third countries to Germany (Section 2 (11) AWG). The transfer of software or technology including their provision by electronic means is equivalent to import . Even electricity is considered as a commodity, securities and cash , however, are not goods (§ 2 para. 22 AWG).

The Incoterms published by the International Chamber of Commerce (ICC) in Paris since 1936 (current version from 2010) are usually used as standardized contractual clauses to design import contracts with regard to the assumption of costs for transport , packaging , insurance and the transfer of risk on the object of purchase . When importing into the economic territory of the European Union, the importer is responsible for paying the due customs duties and import sales tax .

The state has an interest in controlling imports and exports (protecting domestic markets from dumping , for example, and arms trade ). The market regulation for imports consists of import quotas , import permits or import duties . A trade embargo can restrict imports in whole or in part. They all have a restrictive effect on imports and limit them quantitatively and / or qualitatively. The theory of regulation, written by George Stigler in 1971, suggests that trade barriers as a form of regulation - regardless of whether they are tariff or non-tariff in nature - are introduced and maintained by the importing country. While tariff trade barriers were increasingly dismantled in the past by the provisions of GATT and the World Trade Organization (WTO), the importance of non-tariff trade barriers has grown.

As a non-EU country, Switzerland also levies customs duties on goods from neighboring EU countries. An import permit is often required for various goods, for example war weapons or medicines . A general import permit (GEB) is required for the import of many agricultural products . It is issued by the Federal Office for Agriculture on request to natural and legal persons as well as groups of persons who have their place of residence or headquarters in the Swiss customs area. The GEB does not give an automatic right to import a product at the low quota tariff rate (KZA) or zero tariff; for this you need an allocation of a quota share or a utilization agreement. For many agricultural products, tariff quotas are distributed z. B. through auctions . If an importer has a quota share, he can import the corresponding goods at the lower KZA / zero tariff. If an importer does not have a share in the quota, he has to pay the significantly higher extra-quota tariff rate (AKZA). Imports to the AKZA are possible at any time and in unlimited quantities.

Import quota as the difference between export and net export quota

The figure shows the exports in relation to the respective GDP for the countries of the triad , i.e. the three largest economies in the world , as well as the net exports in relation to the GDP. The import quotas are also hidden in the picture as the difference between the export quota and the net export quota . Rising export and import quotas are an indication of the increasing international interdependence of world trade in the course of globalization .