There is a trade surplus if the exports (exports) of a country during a certain period (e.g. one year) measured in monetary units are greater than the imports (imports). The export surplus is shown as a balance on the liabilities side of the trade balance . A surplus is considered to be an indicator of the competitiveness of a country and specifically of the industries whose exports contribute to the trade surplus.

The term active trade balance was first used by Francis Bacon in 1615 .

If an economy has a surplus in the trade balance, this means that it must also have a surplus in the capital account (principle of double-entry bookkeeping ). This results in a net capital export, domestic claims against foreign countries increase or domestic liabilities towards foreign countries decrease. The capital export includes the acquisition of assets abroad, for example in the form of the purchase of companies ( direct investments ), land and houses, securities and so on. The granting of bonds abroad also counts towards capital exports.

Open goods markets enable a choice between domestic and foreign goods. It depends primarily on the real exchange rate - the relative price of domestic goods expressed in units of foreign goods.

A devaluation of the domestic currency usually leads to a decrease in import demand due to the increase in import prices (consequence: imports decrease) and to an increase in export demand due to the decrease in export prices (consequence: exports increase). This leads to an improvement in the trade balance if the Marshall-Lerner condition is met. This is the case when exports increase enough and imports decrease enough to offset the rise in import prices. In reality, it has been shown that after a devaluation there is initially a deterioration and only later an improvement in the trade balance. This process is also known as the J-curve effect.

If domestic income falls, this leads to falling imports if the exchange rate remains constant. If, in turn, the income of foreigners increases, this leads to increased exports from the domestic perspective. Both processes lead to an increase in the trade balance.

A fall in domestic demand for goods (e.g. through lower government spending , tax increases, lower consumer spending on goods with shares from abroad) leads to a fall in domestic production combined with a reduced import of goods for this production and a trade surplus. 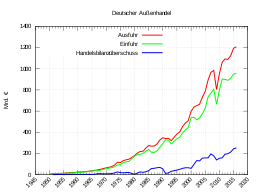 Development of German foreign trade since 1950

The German economy is heavily dependent on exports. At the same time, as a country poor in natural resources, Germany is also dependent on imports (especially energy).

Exports (exports) in 2017 were around EUR 1.27 trillion, up 6.2% on the previous year. As in the past, Germany is one of the countries with the largest exports of goods worldwide. With a share of around 18%, cars and car parts are Germany's most important export goods. Machines (15%) and chemical products (9%) follow in second and third place of the most important export goods. These three industries account for 42% of German exports.

Trade surplus with member states of the European Union

German trade balance in% of GDP against the euro area, the USA and emerging countries

In 2009, the PR China was the world 's first export champion. In the 2nd quarter of 2007, China was already the export world champion (ahead of the USA). From 1978 to 2006, China's share of world exports rose from 0.8 to 8.0 percent. According to Germany Trade and Invest (gtai), the export successes of the Middle Kingdom are only marginally based on cheap products. With an export share of 18.5 percent, China is already the largest supplier in the electronics sector, as is it for electrical engineering with 13.4 percent. In the steel sector, the country was just behind Germany (8.8 percent) with an export share of 8.7 percent.

In 2016, Germany's current account showed around 297 billion dollars, that of the world's largest trading nation, China, around 245 billion dollars. With 8.6 percent of the gross domestic product, Germany exceeded the 6 percent mark of the European Commission, which is considered to be a threat to stability. The Ifo Institute described Germany as the “largest capital exporter in the world” because the money goes into tangible and financial assets in the rest of the world on the one hand and flows directly or indirectly to crisis countries on the other.

During the COVID-19 pandemic in the People's Republic of China, China imported significantly less than before. In May 2020, 16.7% less was imported and 3.3% less exported than in May 2019. As a result, the foreign trade surplus rose to a record level in May 2020.