At the state level, state expenditure represents a part of state finances in addition to state revenue . The financial economy of a state deals with the financing of state tasks , in particular investments in infrastructure (such as federal highways or federal highways , education , research and development , national defense ) or the payment of transfer payments ( such as social benefits ). These expenditures are covered in the federal budget by government revenue and loans, for example in the form of government bonds . State financing is carried out in a similar way in all federal states around the world .

Government expenditure is incurred as part of the tasks that remain with the state and have not been delegated to lower-level authorities within the framework of federal contract administration . These include in particular personnel costs , material costs , interest and amortization expenses , grants to local authorities as part of the financial compensation , subsidies to companies , subsidies to companies and other recipients, debt service aid , allocations to reserves , spending on investment ( construction projects , acquisition of movable property and land , Acquisition of participations and other capital assets, of claims and shares in companies, of securities as well as for the capital increase in state-owned companies ), expenses for the compensation of losses in state-owned companies and for the use of contingent liabilities . In a broader sense, government expenditure also includes all public expenditure . In addition to expenses for the local authorities, this also includes social security expenses . According to Section 34 (2) BHO, expenditures are to be made within the framework of economic efficiency and thrift .

Similar to business administration , public finance differentiates between ordinary and extraordinary government expenditure . Regularity or predictability play a role in the classification. Ordinary government spending includes all of the above except for debt servicing , loss payments , and the drawdown of contingent liabilities.

Government expenditure is offset by government income. These revenues are not earmarked in state activity, but serve without restriction to cover state expenditure ( overall cover principle ).

There are a multitude of individual tasks that have to be fulfilled by different administrative areas and for which expenses have to be carried out. These are grouped into related subject areas according to the functional principle. A comprehensive list of the individual government tasks can be found in the Federal Statistical Office .

Examples of summarizing subject areas are:

Cross-disciplinary expenses include, for example, general real estate and capital as well as financial allocations, interest or grants. A detailed overview of Germany's government expenditure can be found in the financial report of the Federal Ministry of Finance (see web links). 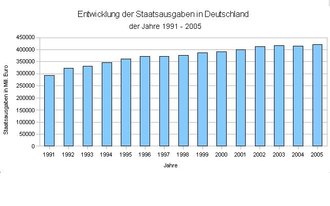 According to calculations by the Federal Statistical Office in 2012, public expenditure (including state expenditure with social security) in Germany amounted to an estimated 45.2% of GDP (GDP = 2,644 billion euros), income from taxes , levies and contributions was 44.3% of GDP (Average of the member states of the European Union : 49.4%). The social quota (including health system, family, unemployment insurance) was around 30.3% of GDP in 2006.

Government spending in the economy

In the area of financial policy, government spending is an important instrument for influencing the economy and the business cycle.

Assuming fiscalism (demand-oriented financial policy), for example, the payment of subsidies to companies can be described as such a measure. With the help of government subsidies, companies have the opportunity to invest in new production units or research and development , for example . This enables companies to offer more products, possibly also at lower prices, which increases consumer consumption. As a result, companies generate more sales and profits increase. With higher profits, companies pay more taxes, from which the state benefits in the form of increasing state revenues.

Government spending is the subject of some key figures in economics .

The government quota as an indicator of government activity in an economy, measured in terms of gross domestic product , is then calculated as follows:

The higher the state quota, the stronger the state influence of finances on the economy and vice versa. In welfare states there is regularly a high state quota.

When goods market government spending will also be considered, such as in the demand for goods:

According to this, the demand for goods is made up of private consumption , private investments , government spending , exports and imports .

In the national accounts there is a different breakdown of government expenditure. In addition to the regional authorities, social insurance is also included in the state sector. They are divided into the following four categories:

Gross investment
Gross investments are understood to mean the maintenance of immovable property, the management of land, rents, leases and other material administrative expenses (military procurement or business needs). Investments are also made for construction measures (for example the building of schools) and the acquisition of movable and immovable property or shares.
Transfers
Transfers are transfers to households in the form of social benefits such as housing benefits, student grants and social assistance, and transfers to companies in the form of subsidies .
interest
Interest is expenditure that must be paid on current loans from the local authorities.

Government spending and government revenues should be used to smooth the respective economic cycles anticyclically be used. Of particular importance are expenditures that later have an effect on government revenue, such as public education expenditures that will help beneficiaries to obtain taxable work in the future . Investment spending tends to have a long-term effect and is seen as promoting growth ; it leads to a right shift in the supply and demand curves .

The difference between government revenue and government expenditure is called positive or negative savings and gives the budget balance (budget surplus or deficit):

A budget deficit requires higher government revenues, a reduction in government spending or borrowing, a budget surplus can enable tax cuts, higher government spending, and greater loan repayments. The savings are negative in most industrialized nations (e.g. in Germany since 1970), so that the state has to go into debt . For example, the balance of the Federal Republic of Germany in 2006 was EUR 24 billion, which resulted in a net borrowing of the same amount. However, a number of countries also have balanced budgets.