The national accounts (often used today in the plural national accounts ; abbreviated VGR ) is a branch of macroeconomics . It is a statistical work of several partial calculations that record the performance of an economy . The focus is on the creation , distribution and use of gross domestic product (GDP) and gross national income (GNI).

The basis of the national accounts is the cycle theory , in which all exchange processes between companies and households are recorded. All manufactured goods and services form the value added , provided that it is not an advance service . The change in value added compared to the previous year serves as a measure of the development of an economy .

The national accounts only cover economic processes. This includes the unofficial economy, but for reasons of practicability according to the internationally valid definition, not unpaid work, although this is also economic production. In contrast, the environmental and economic accounts and other sustainability indicators serve to deal with questions other than purely economic . 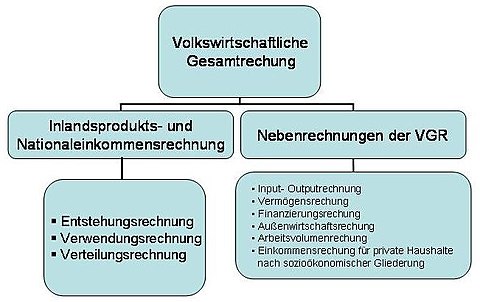 Classification of the partial accounts of the national accounts

“The national accounts pursue the goal of describing the economic activity of an economy for a past and therefore closed period as comprehensively as possible.” The determined values ​​are recorded in the form of an account system and presented in the form of tables.

The national accounts are used by politicians as an information basis for business cycle and economic policy decisions. Without this data, no framework could be created. The national accounts data also serve as a basis for macroeconomic decision-making. Information such as income, productivity and price level developments are required by trade unions and employers' associations for collective bargaining.

Many research institutes also rely on national accounts data for their analyzes. The data obtained are also a benchmark for compliance with the 1967 Stability Act .

International organizations also rely on the material for determining financial contributions and services, in particular EU own funds. Furthermore, the European Central Bank is also dependent on the values ​​of the national accounts.

Luca Pacioli laid the foundations . With his publication Summa de Arithmetica, Geometria, Proportioni et Proportionalità in 1494, he helped double-entry bookkeeping to break through. In the 18th century, François Quesnay suggested a systematic presentation. He developed the Tableau économique of a closed goods and economic cycle . He made a distinction between three sectors: farmers, landowners and traders. He also recorded all current movements between the sectors.

Another essential contribution to the development of modern national accounts comes from Karl Marx . Marx took up Quesnay's tableau and made it the basis of his cycle analysis (the “reproduction schemes”) in the second volume of his major work Das Kapital - Critique of Political Economy . The second volume is subtitled The Circulation Process of Capital .

John Maynard Keynes carried out a further development of the cycle theory in 1936. Keynes provided the basis for the systems used internationally today. These were designed in various versions for the OECD and the United Nations by Richard Stone . The fourth edition of the System of National Accounts (SNA 2008) currently exists . The European System of National Accounts (ESA 1995) is still widespread in the European regions . It is based on United Nations guidelines. The aim was the binding standardization of the various national methods, concepts, classifications, definitions and booking rules for better comparability between the individual member states of the EU . The ESA 1995 will be replaced by the ESA 2010 retrospectively from September 2014.

The calculation of national income , gross national income and gross domestic product is explained below using the distribution calculation . This table shows the components of the bill on the left and the associated data for Germany from 2007 and 2017 on the right.

Further calculation methods can be found under gross domestic product .

Ancillary calculations of the national accounts

The input-output calculation is closely related to the domestic product calculation. The central focus is on the description of the interlinking of goods and production between the production areas, as well as their share in the total values ​​of production, income generation and use.

The asset accounting pursues the goal of recording all stocks of material goods, receivables and liabilities. Furthermore, an insight into the composition of the assets is made possible. The data from the Federal Statistical Office and the Deutsche Bundesbank serve as an aid .

In a closed economy , the macroeconomic net financial wealth cannot change (without taking foreign countries into account), since the deficit of one sector is offset by the surplus of another sector: the monetary liabilities of one sector are the monetary claims of another sector and therefore cancel each other out. Domestic financial investment is generally offset by the external contribution .

The national accounts include the foreign deficit in the amount by which it contributed to a domestic surplus during the respective period and “where the sum of the financial balances of the individual sectors (difference between income and expenditure) must be zero . "

The national financial accounts are usually interpreted in an orthodox manner to the effect that surplus expenditure is financed from surplus income. However, the relationship in the sense of credit theory and the balance mechanics can be seen in the reverse causal relationship: The amount of the spending surplus finances the amount of the revenue surplus of the complementary sector.

Excess liquidity gained from the overseas spending surplus can of course be made available (again) to the foreign credit institutions for refinancing purposes in order to compensate for the liquidity that tends to drain from the deficit country's banking sector . Nonetheless, the following applies with regard to the current account (also with reference to the following economic period): Surplus expenditure finance surplus income of complementary group (s) in the same amount.

The foreign trade accounts register all flows of goods and capital between residents and foreigners. The development of exchange rates , export and import prices as well as the real exchange relationships, also known as the terms of trade , are just as important . The most important point is the balance of payments , which shows changes in credit relationships with other countries.

The work volume calculation determines the number of employees and self-employed .

Shows the income distribution of private households according to groups of self-employed, employees and inactive households.

Two important methods can be used for comparative analysis of GDP: the comparison over time and the international comparison.

The difficulty with comparisons over time is that all goods produced are valued at market prices. It is therefore essential to distinguish whether production has increased or whether only prices have increased. For this purpose, the domestic product must be broken down into a quantity component and a value component. Because only a real increase in production also leads to greater economic prosperity. For a better comparison it is therefore necessary to determine the real development. This is done using the GDP deflator .

An international comparison leads to further difficulties. In particular, the conversion into a common currency is necessary, for which a suitable exchange rate must be determined. The starting point for this is purchasing power parity . This states that the same goods should cost the same in two different countries. The purchasing power parity rate (PPP rate) can be derived from this. This provides information about how high the exchange rate should be so that real prices are subject to a uniform price level. In the long term, the actual exchange rate and the PPP rate should be the same.

When comparing countries with very different levels of development, the lower quality of the statistical data and changes in procedures can lead to distortions. The United Nations System of National Accounts, which is accepted worldwide today, facilitates international comparability.

The national accounts data are subject to inaccuracies to varying degrees. The complete non-recording of the unpaid work is the heaviest, but an additional calculation can also be created for this. Much data must be estimated using different methods. Smaller companies in particular are often not required to submit statistical reports, as they do not even cover the shadow economy . Some statistics, especially in the service sector , are only collected at intervals of several years. Often, however, data can also be calculated in other ways. Among other things, several sources with different data are available for some areas, as there is an unclear delimitation and therefore different assignments are made. Due to the complexity of the calculation, inaccuracies cannot be avoided. "The inaccuracy of the domestic product numbers is often estimated to be around three percent."