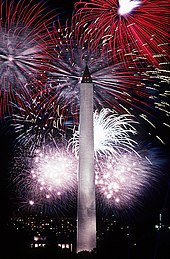 The Independence Day , English for Independence (even Fourth of July , Fourth July '), the national holiday of the United States of America , which every year is celebrated on July 4.

He recalls the ratification of the United States' Declaration of Independence by the Continental Congress on July 4, 1776 in Philadelphia. On that day, the formerly British Thirteen Colonies were referred to for the first time in an official document as the "United States of America". Although the legal basis of the United States only emerged with the ratification of the US Constitution of 1787, which is still valid today, on June 21, 1788, July 4, 1776 is already regarded as an act of founding the state . 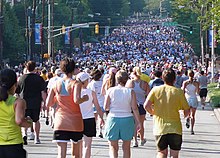 On the first anniversary of the declaration of independence, July 4, 1777, thirteen shots were fired in Boston in the morning and thirteen evening. Philadelphia celebrated the first anniversary with an official Continental Congress dinner, 13 gun salutes , speeches, prayers, music, parades and fireworks. Ships were adorned with red, white and blue bunting.

In 1778 George Washington celebrated Independence Day with a double ration of rum for his soldiers and an artillery salute across the Atlantic Ocean for ambassadors John Adams and Benjamin Franklin , who were in Paris at the time .

In 1783 the piece of music Psalm of Joy by Johann Friedrich Peter was performed in Salem .

In 1791 the name Independence Day was first used.

Today picnics and patriotic parades , concerts, fireworks, and the public raising of the United States flag mark this holiday; many objects are decorated in red, white and blue. Independence Day fireworks are often accompanied by patriotic songs such as the national anthem The Star-Spangled Banner , God Bless America , America the Beautiful , My Country , This Land Is Your Land, or Stars and Stripes Forever . The Yankee Doodle is also common in the northeastern United States, and the Dixie in the former southern states .

Furthermore, the naturalization celebrations for immigrants take place in many cities .

Like the national flag and anthem, the national holiday has a special symbolic meaning in the context of civil religion . Events that take place on July 4th are often interpreted as a sign of providence for the nation, while other acts are undertaken on July 4th in order to emphasize their symbolic content. By a curious coincidence, the second and third presidents of the United States, John Adams and Thomas Jefferson , died on July 4, 1826 ( Stephen Foster's parents , who was born on that day, briefly considered putting their son on the Name "Jefferson Adams Foster"). Zachary Taylor , the twelfth president, died after giving a patriotic speech on July 4, 1850, despite the scorching heat, refreshing himself with large amounts of ice water and contracting acute gastroenteritis .

Henry David Thoreau moved into his cabin on Walden Pond on July 4, 1845 , and the fact that Nathaniel Hawthorne was born on July 4, 1804 seemed to give a special quality to his reflections on the nation's past and future.

In the 20th century, this symbolic act was taken up again in the Vietnam War film Born on July 4th ; In Roland Emmerich's science fiction film Independence Day (1996) , the American armed forces beat the aliens on American Independence Day as well. Richard Ford , a major American writer, describes in his 1995 novel, Independence Day (orig. Independence Day ) some exemplary July days in the life of a typical American.