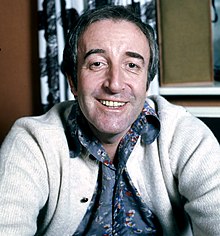 Peter Sellers, CBE (born September 8, 1925 as Richard Henry Sellers in Portsmouth , † July 24, 1980 in London ), was a British comedian and film actor . The specialist for appearances in a wide variety of roles and disguises was known at the latest as the idiot Inspector Clouseau in the film series The Pink Panther . Its characteristic German dubbing voice was spoken by Georg Thomalla (with the exception of the first film, there by Harald Juhnke ). 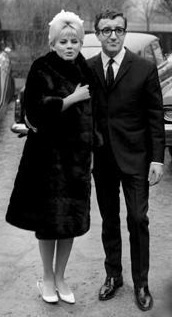 Richard Henry Sellers was born in 1925 as the only child of pianist William Sellers and his Jewish wife Agnes "Peg" Marks. His mother, who appeared as an entertainer with the Ray Sisters , was a great-granddaughter of the famous British boxer Daniel Mendoza (1764-1836). Sellers accompanied his parents on their tours for the first six years of his life before attending the Roman Catholic school St Aloysius College in Highgate . He finished his school education at the age of 14 in order to earn a living with various temporary jobs behind the theater stage and later as a drummer in a dance band. Against the wishes of his mother, he followed the draft by the Royal Air Force for missions in World War II . Until 1947 he played the troop entertainer in different parts of India and Southeast Asia .

Back home, BBC producer Roy Speer Sellers noticed that he was a voice imitator. Speer got him an appearance on a comedy show, after which Sellers got engagements in various radio programs. He was best known for his participation in the BBC radio production The Goon Show , where he performed live with Spike Milligan and Harry Secombe once a week . Sellers took on at least five different speaking roles on these shows, which were broadcast on the BBC Home Service between 1951 and 1960 . With surreal humor, the “Goons” took up bizarre characters who traveled through post-war Great Britain and were confronted with bureaucratic nonsense, imperial illusions or figures from the establishment in decline .

In parallel to his work on the radio, Sellers appeared regularly in British films from the early 1950s. In 1955 he was seen in a supporting role in the award-winning crime grotesque Ladykillers on the side of Alec Guinness . In 1957/58 he shot the comedic film The Running Jumping & Standing Still Film together with Richard Lester , in which they also played the two main roles: Sellers that of the photographer and Lester that of the painter. The eleven-minute short film, poor in action, brought Sellers a prize at the San Francisco International Film Festival in 1959 and an Oscar nomination for Best Short Film . Soon afterwards, Sellers had his international breakthrough as a film actor with John Boulting's feature film Young Man from a Good Family . In contemporary social comedy, he appeared as a communist workers' representative, which earned him the British Film Academy Award for Best British Actor in 1960 . Sellers was able to build on this success with Stanley Kubrick's grotesque anti-war film Dr. Strange or: How I learned to love the bomb by impersonating two other characters alongside a mad scientist. The film earned him his first Oscar nomination for Best Actor in 1965 . The role of the incompetent to idiot Inspector Clouseau in Blake Edwards ' series The Pink Panther , which he interpreted in six films between 1963 and 1982, helped him to worldwide fame . The role was originally intended for Peter Ustinov , who had turned it down. In Edwards Sellers found his perfect partner and friend for a number of other comedies.

Sellers was one of the highest paid actors of his day and was often dubbed by the British press as the greatest English comedian since Charlie Chaplin . However, in the absence of further offers and not least out of financial interest, he also appeared in productions that did not correspond to his talent or his ideas (e.g. in various roles in advertising spots for Barclays Bank ). For his most popular role as Inspector Clouseau, Sellers therefore developed a downright love-hate relationship. With every further appearance he was more committed to this comical figure, but on the other hand he could also use it as a "comeback".

When asked how he was able to portray so many different characters, the actor gave the ironic answer that he had had his identity surgically removed. His appearance at the Muppet Show should also be seen from this perspective , in which the guest star is usually shown at a “private moment” with one of the Muppets figures in the cloakroom; Sellers, however, appeared as a kind of crazy "Viking pirate tramp" on the grounds that he himself was probably too boring. This performance earned him a nomination for the US Emmy Television Award . Sellers recorded another critical success with the portrayal of a mentally retarded gardener in Hal Ashby's film Welcome Mr. Chance (1979), which he u. a. earned a Golden Globe for Best Comedy Actor and another Oscar nomination. The hero of the title, who has never left his employer's estate and only knows the world from television programs, can influence American and international politics through his friendship with a terminally ill industrialist (played by Melvyn Douglas ). According to the contemporary criticism of the Neue Zürcher Zeitung , Willkommen Mr. Chance could have laid the foundation "for a new beginning beyond the glaring comedy", but Sellers died a short time later. 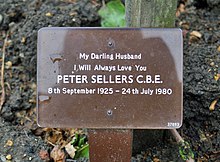 Peter Sellers died on July 24, 1980 of complications from a heart attack . He had suffered from heart disease for the last 15 years of his life and had a pacemaker inserted in 1977 . He left a fortune equivalent to around 10 million euros. Peter Sellers found his final resting place in the garden of Golders Green Crematorium in London .

The film The Life and Death of Peter Sellers with Geoffrey Rush in the leading role sheds light on the background to his life and work.

Peter Sellers was named Commander of the British Empire (CBE) in 1966 . He was a member of the Freemasons Association, his lodge (Chelsea Lodge No. 3098) is based in London.

His ability to change, his constant preservation of dignity and demeanor, even in comical or even embarrassing situations with his overplaying or frozen facial expressions , made his artistic “handwriting”.

Sellers was able to switch back and forth between different accents, for example between upper-class English, American English, German accent and others, which he found in Dr. Strange allowed to appear in three main roles. Georg Thomalla was also able to translate various dialects into German synchronization.

Roger Field , a neighbor of Peter Sellers as a child, is said to have asked him in 1975 if he would rather play drama or comedy. Sellers supposedly replied "Comedy!"

Sellers had great sympathy for the " nonsense -School" (nonsense school) , the kind of comedy that he himself in the Goon Show practiced and had brought his life his happiest time. Attempts to transfer this to the film as a screenwriter and director ( The Malicious Game of Dr. Fu Man Chu , 1980), however, failed. Sellers later admitted that with the Goons one had tried to take up serious ideas or ideas at all and to put them into an "illogical conclusion".

In Sellers' legendary desire for disguises, which should never be perfect but rather threadbare, the film scholar Johannes Binotto sees the very own profile of his comedy: “In the ability to keep the disguise at a distance and your own game in a kind of limbo, there is the unique brilliance of Sellers [sic!]. Where comedians like Chaplin or Keaton completely embody their characters, Sellers is someone who always manages to play several roles at the same time, who is constantly shedding his skin and pupating again and never hiding this process of transformation, but precisely in its artificiality exhibits. "