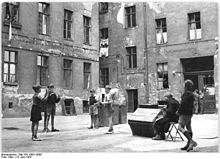 A tenement barracks (also residential barracks ; in Austria interest barracks ) is a multi-storey inner-city tenement house with one or more inner courtyards from the time of industrialization ( Wilhelminian era ), which was built for the broad section of the population of workers and employees .

Tenements were usually built by large landowners or terraced societies, the forerunners of today's housing associations , using a closed construction method . When building a tenement, the property was used to the best possible extent within the framework of the building regulations .

After many tenements were structurally upgraded as a result of the renovations in recent years and decades, today we tend to speak of old building areas or old building quarters, or, in relation to the time, of Wilhelminian style quarters. They are not to be confused with actual, former barracks that were later converted for residential purposes.

The tenement is divided into several parts of the building :

Front building
Directly on the street and standing parallel to it, often with a representative facade, as part of the street-side block perimeter development
Side wing
Extension of the front building at a 90 ° angle on one or both side property boundaries ; mostly with its own staircase.
Rear building (also transverse building or euphemistic garden house )
Rear courtyard development, which is parallel to the front building and thus parallel to the street, often following the side wings. If there are several courtyards, there are accordingly several rear buildings.
Remise
Usually one or two-storey annex that is used as a garage or commercially, in the past often also as a stable building for horses or cows.

In particular, when there are several rear buildings and side wings on a plot of land, a comb-shaped or ladder-shaped building structure results from building wings that are parallel to the street (front and rear buildings) and those that are perpendicular to it (side wings, sheds).

Apartment buildings (in the background) replaced almost all of the village-like buildings in the former suburbs in the rapidly growing Vienna of the Wilhelminian era.

As here in the Berlin district of Prenzlauer Berg , tenement houses often have several backyards connected to one another.

Contemporary criticism of the tenement town in a drawing by Heinrich Zille - "Mutta, jib the two flower pots out, Lieschen sits so jerne in the green!"

The basis of the building regulations was the first development plan drawn up by James Hobrecht in Berlin from 1862 with 14 departments. According to police regulations , the inner courtyard of a rental building had to be planned at least large enough for a horse-drawn fire engine to turn around in it. According to the building police regulations, this was exactly 5.34 m × 5.34 m. A sequence of three or four courtyards was not uncommon. The courtyards were mostly accessible from the street via passageways. Several tenements formed a building block . The incredibly narrow construction of these apartment blocks was tantamount to "barracking" the residents, from which the name is derived.

The front house was with his elaborate design at the community center ajar. The street facades were often designed with stucco and structured by cornices. The storeys of the front building were mostly higher than in the side wings and rear building, so that the living conditions were favored by more daylight and these were inhabited by higher social classes. The Berlin room in the corner of the side wing mostly belonged to the front building as a passage room to the rooms of the side wing. In the rear buildings the apartments consisted of a kitchen, a bedroom and sometimes a chamber. Only the kitchen-cum-living room could be heated, where family life also took place. Most commercial enterprises settled on the ground floor and in the basement. Only a small number of the apartments were connected to the sanitary system. Most of the Wilhelminian style buildings were not retrofitted with sanitary facilities until the 1920s. Usually several tenants shared a toilet in the hallway or in the stairwell.

The first tenants were already moving in while the builders were still plastering the facades on the scaffolding. One therefore spoke of the " dry living " of the apartments. The often inadequate hygienic conditions, cold, damp and darkness caused a harmful living environment, which worsened in the apartments in the basement and attic . Nevertheless, the residents had to spend 25 to 30 percent of their income on the two- to three-room apartments. In order to be able to finance the rents, the additional rooms of the cramped apartments were mostly sublet or beds were rented to so-called sleepers . Such a sleeping place was often shared by several people in shifts. Up to 30 people lived in one apartment. Even in the hallway people lived makeshiftly on a mattress. Rubbish often collected in the narrow atria.

Tenements existed in Germany mainly in Berlin and Hamburg , where large areas of land were built over. In Austria it was built in Vienna from 1880, mainly in the 10th, 14th, 15th, 16th and 17th districts under the name of apartment building.

Meyers Hof in Berlin's Ackerstrasse , which comprised six backyards and housed around 2,000 people in 300 apartments, was taken as an extreme example . The Meyers Hof residential complex was demolished as part of the renovation work in the Brunnenstrasse redevelopment area . One of the largest closed blocks is located in Berlin on Prenzlauer Berg. It has over 30 backyards of various sizes and is located between the streets of Prenzlauer Allee, Marienburger Straße, Winsstraße and Immanuelkirchstraße.

The architect Franz Hoffmann , co-owner of the Taut & Hoffmann architectural association , gave the following assessment of a tenement at a public lecture:

“[...] In the past, the building blocks of Berlin were almost exclusively built on with front buildings. The large inner surfaces of the building blocks formed gardens. - The building regulations of 1858 made it possible to build on deep plots and not, as at the beginning, mainly to carry out peripheral development. This created the appalling tenements in all the major cities of the world and also in Berlin. Apartments were built in narrow courtyards with extremely poor floor plans, which contradicted all hygiene and had to lead to the impoverishment of its residents. [...] If you also consider that many who had to live in these poor, low-light apartments worked in ugly and unsanitary factories throughout the day, [...] you can imagine that the workers at that time were mostly already 50 Years ago sank into the pit. "

The Loests Hof in Halle (Saale) is one of the last completely preserved tenements . The Loests Hof was built from 1884 to 1890 by the building contractor Rudolf Loest. With a length of 250 meters, four floors, closed perimeter block development and in the form of a profane brick functionalism, it was built as one of the largest of its kind. The average occupancy per residential unit was six people, a total of 2,700 people once lived in Loests Hof. The courtyard was originally closely built up with stables, sheds and businesses. The Loests Hof is a prime example of the urban and hygienically problematic mixed culture of the Wilhelminian working-class neighborhood.

Reasons for the emergence of tenement blocks in the growing cities were the housing shortage caused by strong influx during industrialization and high population growth in the second half of the 19th century, the designation of large building plots and building regulations that largely allowed the building owners to decide on the exact design of the buildings let. Since the housing speculators could only demand low rents from the workers, they tried to achieve the return through narrow buildings and at the expense of quality.

The city administration reacted only hesitantly to the resulting housing misery, because the workers were hardly represented in the city bodies. Because the bourgeoisie feared a moral decline associated with overcrowding, people began to think about solving the problem of small apartments from the 1890s . Municipal housing was initially rejected as an intervention in the market economy. At most, they could agree on a cheaper surrender of building land, a reduction in road development costs, easing of the credit system and stricter supervision by the authorities. In order to curb subletting, the kitchens for the workers in later buildings were kept small so that the family also had to use the other rooms of the apartment.

For example, the garden city movement and, from the 1920s, cooperative housing , in Vienna community housing , emerged as programmatic counter-drafts to the housing misery of the tenements .