Robert Wagner was born the son of a traveling salesman in Detroit. His paternal grandparents came to the USA from Germany. Shortly after graduating from high school, Wagner went to Hollywood to work as an actor. With the help of his agent Albert R. Broccoli , he got a first, smaller film role in Wild Years in Lawrenceville (1950), directed by William A. Wellman . He was then signed by 20th Century Fox . After a series of rather undemanding amateur roles, he was able to convince as an actor for the first time through his appearance as a soldier in the music film With a Song in the Heart . He then played major supporting and leading roles, initially mainly in adventure and western films. He became known to a wide audience in 1954 for the role of " Prince Eisenherz ". In the 1960s, he also made several films in Europe, such as the crime comedy Der Rosarote Panther , in which he played David Niven's nephew , and the film The Enclosed at Maximilian Schell's side .

After the film offers for Wagner significantly decreased and he was temporarily unemployed, he shifted his focus to television in the late 1960s. With the series Your Appearance, Al Mundy (It Takes a Thief) he was able to record a resounding success. Here he played a charming thief who refuses to carry a gun out of professional honor. He continued to work as a film actor, for example alongside Bette Davis in In the Fangs of Madame Sin (1972) and in a supporting role in the star-studded disaster film Flammendes Inferno (1974). From 1975 Wagner played the role of "Pete T. Ryan" at the side of his close friend Eddie Albert in the crime series Die Zwei with the shoot , which was produced until 1978. In the television series Hart but cordially , in which Stefanie Powers and Lionel Stander acted at his side , he played the role of the urbane multimillionaire Jonathan Hart between 1979 and 1984, who is regularly involved in criminal cases with his wife. After the series ended, a further eight full-length television films were produced with the Hart couple. 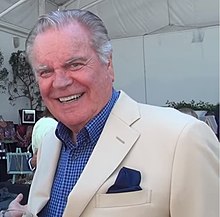 In the three films of the Austin Powers trilogy , which were made between 1997 and 2002, Wagner played the role of "Number 2", the henchman of the film villain Dr. Evil . In 2006 he made a guest appearance in the second season finale of the Boston Legal series , in which he played the office manager of a law firm in Los Angeles. In the television sitcom Two and a Half Men , Wagner was seen between 2007 and 2008 as the marriage fraud "Teddy Leopold". Since 2009 he has appeared as "Anthony DiNozzo senior", father of Anthony DiNozzo junior, played by Michael Weatherly , in the crime series Navy CIS .

The standard voice of Wagner is Joachim Kerzel , but he was also dubbed, for example, by Helmut Gauß , Klaus Guth , Peter Groeger and Hartmut Reck .

Robert Wagner was married twice to actress Natalie Wood , from 1957 to 1962 and again from 1972 until her death in 1981. In between he was married to actress Marion Marshall from 1963 to 1970 . Natalie Wood and Robert Wagner, who were at times considered a dream couple in Hollywood, also worked together in several films. Wood drowned in 1981 on a boat tour in which Wagner and her film partner from Project Brainstorm , Christopher Walken , also took part. Early on, there was speculation in the tabloid press that Wagner pushed Wood overboard in an argument at the time. Natalie Wood's drowning was initially classified as an accident, but according to recent investigations from 2011, her death is now attributed to "unspecified causes". According to the US police in 2018, Wagner has moved into the focus of the investigation as a "person of interest" ( person of special (police) interest ).

The actor has been married to actress Jill St. John since 1990 , with whom he has lived in Aspen since 2007 . Wagner has three daughters, two births from marriages with Marion Marshall and Natalie Wood, and the adopted daughter Natasha Gregson Wagner , a daughter of Natalie Wood from her marriage to Richard Gregson . In 2008 he published his autobiography Pieces of My Heart: A Life , which he collaborated with the author Scott Eyman , with HarperCollins .

Between 1953 and 1984 Wagner was nominated a total of six times for a Golden Globe : once each for the film Love, Timpani and Trumpets and the series Your Appearance, Al Mundy , then four more times for the role as Jonathan Hart. In 1980 he won the People's Choice Award for Most Popular Television Actor.